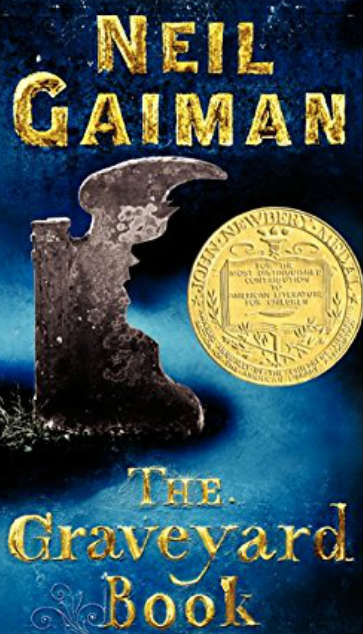 As you settle down for your fall of the year reading, you might want to pick up a darker tale. What about a ghost story? Yes, a ghost story, a tale of fear and death, of ghouls and hauntings. Would you mind if the tale was also one about growing up, of friendship, of discovery, of loss and of course life? If you’re intrigued, head to your nearest bookstore online or off and pick up Neil Gaiman’s The Graveyard Book .

As the story opens, one fall night, a toddler climbs out of his crib and walks away from his home. He finds his way to a historic graveyard nearby and finds sanctuary there though he is stalked by a ruthless killer who will search for him for most of his life. Mr. and Mrs. Owens are a couple of the many ghosts who live in the graveyard. They come to his rescue, adopt the orphan, and give him the appropriate name of Nobody “Bod” Owens. How can ghosts care for the living you might wonder? Neil Gaiman has created an astonishing fantasy world that explores Bod’s extraordinary life in astonishing ways.

Bod grows up with the Freedom of the Graveyard. This means he can see in the dark. The eyes of the living slip past him so he often goes unnoticed. Bod can go into places where the living often cannot go, and the ghosts that live in the graveyard are his family. He plays with them and asks them more questions than they can answer. He also has no fear of death.

His friends are not only ghosts, fortunately. It “takes a graveyard” to raise Nobody Owens. He has his guardian Silas who sleeps through the day in the old chapel. He befriends a living girl who comes to the graveyard to play while her parents sit and read. And as he grows, he meets other friends. This is fortunate because Bod has powerful enemies who would destroy him if they could. The resulting story is a whimsical, thrilling and sometimes sad tale.

Neil Gaiman has very carefully built up this ghost world in excellent detail. He has said that his son inspired The Graveyard Book. Seeing him riding his tricycle between the gravestones awoke the story in his head, and it is clear that the setting greatly influenced him. The graveyard is not just a crowd of bland tombstones. Gaiman clearly spent a long time studying the stones of real life graveyards. His observations are reflected in his descriptions of the different tombs which reflect the dead who “live” there.

For example, the Owenses have a “fine little tomb” because Mr. Owens “had died the prosperous head of the local cabinetmaker’s guild.” Josiah Worthington, former politician, who bought the old cemetery almost three hundred years ago, has the best location on the hill, a natural amphitheater. The witch buried in the unconsecrated ground has no headstone at all. For a book about the dead, these ghosts are very chatty and lively, and full of the strengths and weaknesses they had when they were living.

Even while the ghost world is so intricate and well rounded, Gaiman invokes a much larger world beyond the graveyard which influences Bod’s life. It incites the reader’s curiosity. We learn a lot about the enigmatic Silas and his friends, but there is so much more we want to know. There is a world of ghouls in another dimension. The assassin who stalks Bod belongs to a vast worldwide network. Who exactly is the Lady on the Grey Horse who sometimes visits the graveyard? We have to decide for ourselves. We get lots of hints and insights, but Gaiman leaves a lot unanswered which fires our imaginations and helps this world come alive.

Besides this excellent world building, Gaiman has drawn his characters well whether they are the ghosts, the living or other. Bod is fascinating. He can be both an unsettling, calm, supernatural creature and an inquisitive, sensitive, thoughtful little boy. As he grows, he becomes more complex and intriguing. Gaiman invokes the pain and joy of watching him grow up well. He is clearly channeling watching his own children mature. Silas will be a favorite for any reader I am sure. Like Bod, he hides amazing ability beneath a cool, disconcerting exterior. The glimpses we get into his background are fascinating, and like any well-done character, he could easily star in a book of his own.

The story is woven around this extraordinary boy. Some of the chapters can stand on their own, and at first, the book can sometimes feel like “The Amazing Tales of Nobody Owens” – each a little story on its own. But as the narrative goes on, details and characters and plot lines fuse together into an engrossing climax as Bod faces his destiny. Suspense and mystery infuse the closing chapters, and as the story closes we are left with a strong sense of satisfaction.

Not surprisingly – like any good ghost story – The Graveyard Book is a perfect read for this time of year. I guarantee that you’ve never read one quite like it. There’re lots to keep you in suspense and give you pleasurable chills. If you’re not interested in pure horror, this is perfect as it never becomes grotesquely violent or disturbing. I highly recommend this supernatural tale for fantasy lovers.

I see that a movie adaptation of The Graveyard Book directed by Ron Howard is in the works which should be interesting. It could surely be an exciting and visually arresting movie. This book could work well as an animated film, though. I would like to see it as more of an artistic and atmospheric type of animation in the style of The Last Unicorn and Spirited Away, but that is not seen as much these days.

Our romance-themed entertainment site is on a mission to help you find the best period dramas, romance movies, TV shows, and books. Other topics include Jane Austen, Classic Hollywood, TV Couples, Fairy Tales, Romantic Living, Romanticism, and more. We’re damsels not in distress fighting for the all-new optimistic Romantic Revolution. Join us and subscribe. For more information, see our About, Old-Fashioned Romance 101, Modern Romanticism 101, and Romantic Living 101.
Pin this article to read later! And make sure to follow us on Pinterest.
By Dixie-Ann Belle on October 21st, 2016