If you’re looking to watch a film mixing its sweet with a bit of spice, the indie movie Off the Menu may be of interest. The charming production tells the story of Joel Flanagan (Santino Fontana), a man forced on a culinary road trip. His task is to find the next “best” Mexican cuisine for a failing line of Mexican restaurants; a business his family also owns. With his personal life in shambles, Joel begins the search and eventually makes it to a small, dusty Mexican town. Luckily for him, there’s a local eatery with food the locals rave about.

Only trouble is, the feisty chef creating these culinary dishes isn’t so easy to talk to. Javiera Torres (Dania Ramirez) is a determined and hard-working single mother of a young daughter (Makenzie Moss). Her priority centers on Sophia, and keeping her town as is; small and friendly. Because of this close-knit community, a stranger in town causes a stir, but over time Joel teaches Javiera it’s okay to open up, and Javiera teaches him about food and the importance of community. 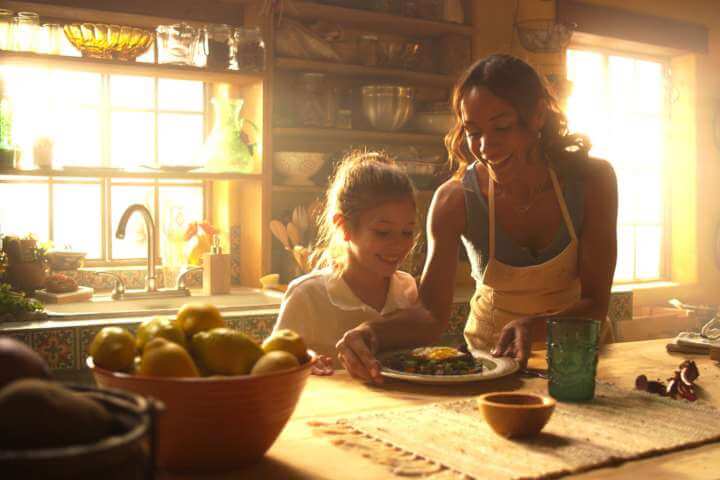 Although this film doesn’t bear the golden crown of the Hallmark Channel, it does have a similar style. It’s a relatively wholesome romantic-comedy featuring the common trope of a character falling for the small town girl, who in turn makes him re-think everything. Because Joel keeps secret his reason for being in town, another trope works its way into the story. That is the common trope of a deceptive character and the dramatic fallout from the lies. This then leads to an end that becomes slapstick “funny,” but not so much it ruins the movie.

This cast list features a group of main actors I’m not familiar with, but they’re all good. The one exception is Maria Conchita Alonso (as Javiera’s mother) from Material Girls and Maneater. The leading man, Santino Fontana will be familiar to those familiar with Broadway productions or the CW show, Crazy Ex-Girlfriend. And fun fact, he voices Hans from Frozen. Apart from its story and cast, the food plays an important role! It’s an experience that will certainly awaken your culinary senses. Then there’s the gorgeous country scenery. A beautiful scene that particularly stands out is when Javiera shows Joel a place important to her.

RELATED | Hallmark’s All New May 2019 Romance: Countdown to Summer

Though imperfect, Off the Menu is a delightful story. It gives those of us who like romance plenty of the genre (including a passionate, but still story appropriate sequence in the kitchen), but also looks beyond just this relationship. There are some emotional moments between mothers and daughters, and of course, there’s a strong sense of community support.

Overall, those of you who enjoy dramas that can balance both romance and family relationships will enjoy Off the Menu. It’s sweet in a simple, but effective way, and that’s what makes it appealing.

Content Note: there’s some suggestive content, and innuendo, but nothing terrible. The film would be a low-end PG-13.

Where to Watch: Find Off the Menu digitally on Amazon Video or iTunes.

Our romance-themed entertainment site is on a mission to help you find the best period dramas, romance movies, TV shows, and books. Other topics include Jane Austen, Classic Hollywood, TV Couples, Fairy Tales, Romantic Living, Romanticism, and more. We’re damsels not in distress fighting for the all-new optimistic Romantic Revolution. Join us and subscribe. For more information, see our About, Old-Fashioned Romance 101, Modern Romanticism 101, and Romantic Living 101.
Pin this article to read later! And make sure to follow us on Pinterest.
By Rissi JC on May 21st, 2019