Long before Robert Downey Jr. was famous for his role in the Marvel films he was busy racking up screen credits in many underrated films in the 1980’s and ’90’s. It is in these movies where I first fell for his insouciant attitude and that liquid brown gaze. One of my favorites of these early RDJ films is the romantic comedy/fantasy Heart and Souls.

At the time of Thomas Reilly’s birth, there is an accident which kills four people. These four souls then find themselves connected to Thomas without understanding why. As Thomas grows, the impact of his friendship with them begins to affect his life in a negative way. In order to spare him, Milo, Penny, Harrison, and Julia decide to become as invisible to Thomas as they are to the rest of the world.

It is not until Thomas is a grown man that these four learn just why they are attached to this man they have watched over silently. Before they return to Heaven, they have the opportunity to use Thomas as their host to complete one task they each left undone on the earth. But their time is very limited. And Thomas remembers them as a mental aberration he spent years in therapy to explain. So, he is not too happy or compliant when his four invisible friends suddenly reappear in his life demanding he interrupts his busy schedule to help them.

Harrison Winslow: Who came up with this ridiculous concept anyway? Resolve your entire life in one bold stroke? What if I fail? And I will. I’ll fail. I’m telling you. I always fail. Then my whole life will be a complete failure.

Thomas Reilly: No offense, Harrison. But you died a failure because you never tried. 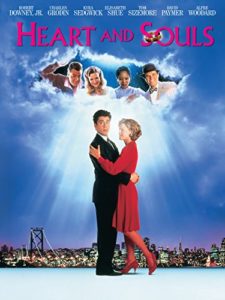 Heart and Souls is one of those charming, but lesser known romantic comedies that were popular in the nineties. But this one also comes with a dash of fantasy and a subtle life-affirming message.

Without a doubt, Robert Downey Jr. is the star of this show. If anyone doubts his acting abilities they have only to watch him play this slightly neurotic, workaholic, commitment-phobe. His journey from a self-absorbed and self-protective man to one who faces his fears and softens his heart is touching. His compassionate portrayal of a broken character is balanced by his brilliant comedic skills. Not only does RDJ play Thomas but he also has the challenge of becoming all of the other four characters as each one takes a turn inhabiting his body. The visual change which comes over him is both stunning and hilarious.

Downey Jr. may be the star, but his light by no means outshines the other character actors of this piece. His four friends are deftly portrayed by the talented acting of Alfre Woodard, Charles Grodin, Kyra Sedgwick and Tom Sizemore. Though Penny, Harrison, Julia, and Milo begin as strangers, their own relationships grow as they spend years together watching over Thomas. Each has the chance to shine in their own storyline as Thomas helps them complete their last wishes. This allows for a strong emotional connection to develop with the viewer to these four souls. Each of their lives portrays its own subtle lesson in living well or the consequences of poor decisions.

Elisabeth Shue fills a small role as Thomas’ girlfriend who is frustrated by his inability to commit. I have long been a fan of Ms. Shue. So I was slightly disappointed to find her underutilized in Heart and Souls. Still, though her role is small it does act as a catalyst for Thomas to re-examine his priorities.

Heart and Souls utilize several songs to create memorable moments in this film. Among these is an a cappella ensemble performance of Frankie Valli’s Walk Like a Man. Thomas and his friends sing this as a show of their bond. Another moving performance is when Thomas as Harrison sings the National Anthem on stage with BB King playing backup. But none is so sweet as Penny’s made up song Mr. Hug a Bug. She sings this to her children and it later helps Thomas identify her grown son. Some films use soundtracks to enhance a film. Heart and Souls manages to use music in a unique way to further the story.

If you appreciate an endearing, feel-good movie with a deeper positive message about the value of an open heart, then Heart and Souls is sure to win you over. If that isn’t incentive enough, then watch it for the brilliant natural performances of its’ cast and songs which will leave you humming under your breath.

Content Note: Rated PG-13 for a few uses of a curse word, and a couple of suggestive scenes.

Where to Watch: Heart and Souls is currently only available on DVD, but believe me, it is worth purchasing.

to tell you how ardently I admire and love you.

1 thought on “Heart and Souls (1993) Review – Robert Downey Jr. Stars in this Fantasy/Comedy with Heart”