Here’s looking at you, kid.

There are a few films that are so famous that everyone has heard of them even if they haven’t seen them. Casablanca is one such film. It is beloved even by those who are not usually fans of classic cinema. Thanks to a great script, fabulous actors in memorable parts and well-earned hype, it is an indelible work of cinematic art even after 75 years.

Rick Blaine (Humphrey Bogart) is the owner/manager of a café in Casablanca, Morocco. Casablanca is a stopping place of sorts, for those fleeing war-torn Europe on their way to the United States. Rick is an American with a complicated personal and political history. His café helps entertain weary emigres as they wait for their visa papers. Rick is pretty weary himself, a cynical, hard-hearted character who “sticks his neck out for nobody.”

Renault to Rick – “I’ve often speculated why you don’t return to America. Did you abscond with the church funds? Run off with a senator’s wife? I like to think you killed a man. It’s the romantic in me.”

Though Casablanca is a free and unoccupied French territory, there is an intricate mix of politics and nationalities. The recent murder of two German soldiers in possession of incontestable letters of transit ushers in the arrival of the German Major Strasser. Strasser (Conrad Veidt) is on the hunt for the murderer. He is also tasked to ensure that Victor Laszlo (Paul Henreid), a leader of the Resistance does not come into possession of those letters. 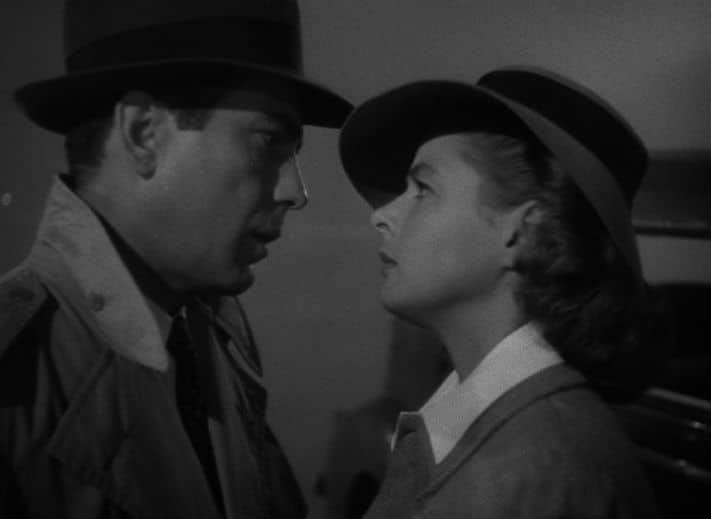 Into this delicate balance (and Rick’s Café) walks Laszlo and his companion Ilsa Lund (Ingrid Bergman). Lazlo is an international hero seeking help to escape, but Rick isn’t inclined to be helpful. Particularly, when he sees his former love Ilsa on the arm of Laszlo. Not only is he bitter, but Rick is also caught up in a more personal game of politics with the French police captain Louis Renault which allows him to successfully operate his café.

Rick is not willing to jeopardize his business, especially for the woman who abandoned him in Paris on the eve of the German occupation. But Ilsa has a different memory of her abandonment. When she discovers that the letters of transit which she and Laszlo need have found their way into Rick’s hands, she uses every weapon in her arsenal to get them. But not everything or everyone is as it seems in this place of shifting alliances. 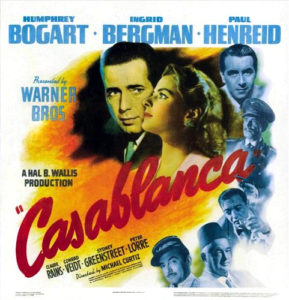 Casablanca is a popular classic for a reason. Despite the script being written as the filming progressed, it is a complete story with interesting and complex characters. The setting in Casablanca and even more so at Rick’s Café is a microcosmic world. This allows director Michael Curtiz to explore themes of love and betrayal, selfishness and sacrifice, loyalty and survival. Place all these themes against the backdrop of war and their consequences and results are magnified.

Casablanca also works as an interesting character study. Though there is the stereotypical Nazi villain in Strasser and the prototypical hero in Laszlo, most of the other characters have mixed motives and character traits. Very few are purely evil or truly good. Rick and Ilsa in particular model this ambiguity in a way that has you rooting for them to choose their own self-interests over the sacrifice required for the larger story. The love triangle they share with Laszlo is compelling and frustrating as the film keeps us guessing as to how it all will end.

Casablanca has endured as a popular film for many reasons, including the talented cast. Who else but Bogart could play the world-weary, disillusioned café owner whose reserve keeps everyone guessing as to his political alliances? But it is the moments when he shows his weakness and vulnerability for Ilsa where he really shines. Of course, Ingrid Bergman is not only beautiful but quite a skilled actress. It is said that her performance as Ilsa turned Bogart into a romantic leading man thereafter. Her portrayal of a woman torn between her love for two men is poignant and touching.

Round up the Usual Suspects

The cast also includes a deep stable of talented character actors including some of my favorites, S.Z. “Cuddles” Sakall, Sydney Greenstreet and Peter Lorre among others. No one but Claude Rains could have turned the corrupt French policeman Renault into one of the most memorable characters in film history. Casablanca’s cast is also unique in that it was largely international with only three of the actors being Americans. Veidt (who played the Nazi Major) along with many others were actually Germans who had fled Europe and were adamantly opposed to the Nazi regime.

RELATED: Vintage Film Review: Sabrina (1956) -A Must Watch For Every Hopeless Romantic

The script was written by twin brothers Julius and Philip Epstein. It is also a classic with more famous lines on the American Film Institute list than any other film in history. And let’s not forget the film score which includes the French national anthem, La Marseillaise, which is sung in a beautifully defiant moment. It also features It Had To Be You, The Very Thought of You and the song with which Casablanca is most identified, As Time Goes By. All of these were popular chart-topping songs.

All of these elements make Casablanca a film which still appeals to a wide audience. It has intrigue, romance, mystery and even comedy thanks to Captain Renault’s dry sense of humor. I recently had the privilege of seeing it on the big screen in a theater with other fans. It still held the same allure as when I saw it for the first time years ago. If you haven’t yet watched this classic, what are you waiting for? You are going to love it!

“Louie, I think this is the beginning of a beautiful friendship.”

Content Note: Casablanca features sanitized war violence and allusions to sexual favors in exchange for freedom. But otherwise, the content is safe to watch.

Where to Watch: Rent/buy on Amazon, GooglePlay or iTunes.