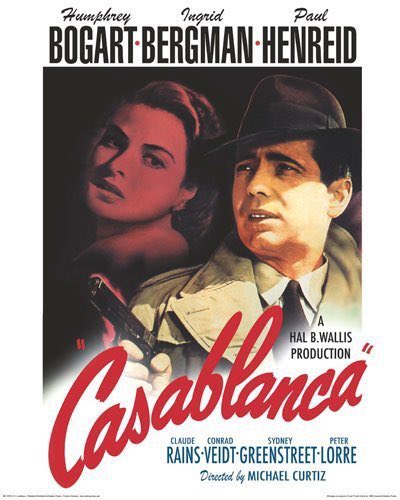 I first became aware of Humphrey Bogart when my boyfriend convinced me to watch a film called The Treasure of the Sierra Madre. I’ll admit I wasn’t too blown away with the man at first. Part of that may have been that I just didn’t really like his character in the story. My opinion of him began to change, however, after that same boyfriend urged me to watch The Maltese Falcon. He began to intrigue me. Now, I can say for certain that after watching Casablanca, I am a true diehard fan of this phenomenal actor. His performance, as well as the performances of the other actors in Casablanca blew me away. It took me a while, but I can finally count myself among the millions of people who love this classic film.

Casablanca, which premiered on November 26, 1942, the same day as the Allied Invasion of North Africa and the capture of Casablanca, is one of those films that has stood the test of time. Rather than fade away into obscurity, this movie has grown in popularity as the years have gone by, and has had a lasting influence on the film industry and culture in general. Casablanca is unique in its amalgamation of almost every film genre and stereotype. Casablanca isn’t simply one film, it’s many films all rolled into one, an anthology if you will. Casablanca perfectly balances action, suspense, comedy, drama, romance, and intrigue to create an incredibly engrossing story that has won the hearts of millions.

Casablanca takes audiences on a whirlwind ride through the mind’s full range of emotions. One minute you’ll be on the edge of tears due to the taut melodrama conveyed between Rick Blaine and Ilsa Lund, and the next you’ll be sitting on the edge of your seat, caught up in the bristling intrigue between the Nazi officers and Victor Laszlo. This is a large part of what makes the film so popular. It has something for everyone.

Of course, you can’t make a great movie without great characters and great actors playing those characters. One thing I loved about the different characters in Casablanca was that they were all a mixture of good and bad, just as any real person is. None of them are saints, and none of them are the incarnation of evil. They’re not cut and dried, and they all start out somewhat selfish and flawed but come into their goodness over the course of the film.

Rick Blaine is an excellent example of this. He’s neither a hero nor a villain. He looks out for himself, and “sticks his neck out for nobody” Rick was actually Bogart’s first truly romantic role. He plays the lover well in my opinion. It was refreshing for me to see him playing the happy man in love in his flashback scenes with Ilsa. I certainly would have fallen for him in a second flat. His portrayal of Rick as the jaded nightclub owner is also spot on. He looks out for himself and nobody else. But, by the end of the film he lets the girl he loves go because it’s what’s best for her, and helps the man she’s married to escape the Nazis. I’d say that’s quite a lot of emotional growth if you ask me.

Claude Rains played Captain Louis Renault. His character begins as a collaborator with the Nazis, who extorts sexual favors and has Ugarte killed. Yet, even this seemingly heartless man ends up helping Victor escape in the end. He makes sacrifices for the greater good, which was something I was definitely not expecting when I saw his character at the beginning of the film.

As you can see, nobody is perfect in this movie. Even Ilsa Lund, played by Ingrid Bergman, is caught in an emotional struggle over which man she loves. Bergman was another favorite of mine in this film. According to her official website, Ilsa Lund was her “most famous and enduring role.” Roger Ebert called her “luminous,” commenting on the chemistry between her and Bogart, “she paints his face with her eyes.” I would have to agree with all of these claims. Bergman was absolutely charming and captivating in this role. This is actually the first film I’ve seen her in, but I think I’ll have to fit in a few more.

While doing a bit of research on the film, I discovered that a large proportion of the extras and minor roles in the film were played by actual European exiles and refugees, many of them Jewish. I imagine this accounts for much of the emotional impact of the film. A witness to the filming of the “duel of the anthems” sequence said he saw many of the actors crying and “realized that they were all real refugees.” Harmetz, the author of Round Up the Usual Suspects: The Making of Casablanca, stated that they “brought to a dozen small roles in Casablanca an understanding and a desperation that could never have come from Central Casting.”

The cinematography, done by Arthur Edeson, also played a large role in the emotional impact of the film. Bergman was often shot with a softening gauze filter and catch lights to make her eyes sparkle. It was designed to make her face seem “ineffably sad and tender and nostalgic.” Bars of shadows were placed across the characters’ faces and the background to imply imprisonment, the symbol of the Free French Forces, and emotional turmoil depending on the scene. Many of the scenes, particularly towards the end, used dark film noir and expressionist lighting. All of these aspects come together to create visually captivating scenes, enhancing the emotional nuances in the dialogue and performances.

This film really got under my skin. I’d have to say it’s probably my favorite so far out of the numerous classics I’ve watched while writing this column. I think I may even be turning into a fan of old movies. Who would of thought? We’ll see if I’m singing the same tune next week after I watch The Pirate. Stay tuned!

Harmetz, Round Up the Usual Suspects: The Making of Casablanca. 1992.

Are you in love with Casablanca? What are some of your favorite scenes? Do you have any suggestions for movies I should watch? Sound off below…

Make sure to catch all of my articles in My Journey Into Old Movies here.

Our romance-themed entertainment site is on a mission to help you find the best period dramas, romance movies, TV shows, and books. Other topics include Jane Austen, Classic Hollywood, TV Couples, Fairy Tales, Romantic Living, Romanticism, and more. We’re damsels not in distress fighting for the all-new optimistic Romantic Revolution. Join us and subscribe. For more information, see our About, Old-Fashioned Romance 101, Modern Romanticism 101, and Romantic Living 101.
Pin this article to read later! And make sure to follow us on Pinterest.
By Rebecca Lane on April 30th, 2015