#11 The Land Before Time

Don Bluth made several films in the 1980s after he broke away from the Disney Studio. While The Land Before Time was not his first film away from Disney, this is my personal favorite. It has its moments of terror; 19 minutes of the film were removed because they were considered too frightening for kids to watch (I cannot imagine what those 19 minutes were like).

While the film has gone on to spawn at least 15 sequels, this one remains the darkest, not even just in story but also in color scheme (and it’s not a musical). Land Before Time was the result of collaboration between Steven Spielberg and George Lucas, in a solid feature. The score by James Horner reduces me to tears every time.

Basically, it’s a darker and in some ways an edgier film that was still marketed to a wide audience and beloved by generations. It took advantage of the dinosaur phase each kid goes through and ran with that while still looking good. 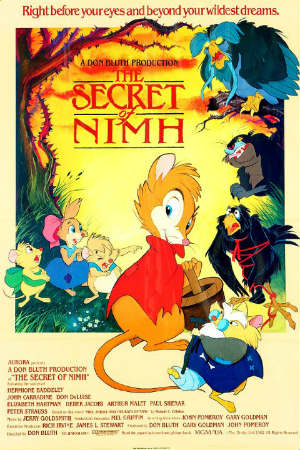 These two last entries almost broke my rule because they are fairly close together in release date, but I think Don Bluth should be on this list twice. The Secret of NIMH was released in 1982 and was the first animated feature that he produced on his own.

The film had been pitched to Disney but rejected; leading to Don Bluth, John Pomeroy and Gary Goldman all leaving Disney (followed by at least 15 other animators). This exodus has been called “The Disney Defectors” by the press. Many of the new animation studios of the ’80s and ’90s were made up of Disney Defectors (Dreamworks, Don Bluth Productions, Nest Entertainment, etc).

There were tons of special effects in The Secret of NIMH; new technology was developed and experimented with to create the film, including photographing 3-d model sets, as well Xeroxing individual cells and linking them together. The film also used multiplane techniques and backlighting. It’s a dark and very risky feature, but one that is looked at by many as the studio’s greatest masterpiece.

No matter what you think about Shrek, it can’t be denied that it changed the landscape of animated films. Released in 2001, Shrek was deeply satirical, particularly in relation to the Disney Studio (with whom Jeffery Katzenberg, one of the three studio heads at Dreamworks, had a fraught relationship).

Different than other Dreamworks pieces, The Prince of Egypt is epic. It was directed by the team of Brenda Chapman, Steve Hickner and Simon Wells, the first time that an animated film produced by a major studio had a female director. It was pitched to Disney by Jeffrey Katzenberg several times but consistently rejected.

It was also very expensive to make, and IMDB tells me that the scene where the Red Sea is parted, a scene that lasts 4 minutes, took 10 animators two years to finish. The film also involved the studio’s consulting with 600 religious experts from Judaism, Christianity and Islam to make the film as accurate as possible.

The story of Exodus is important in some way to each faith, and the studio wanted to do its best to make the film not offensive to any of the faiths. I can’t speak for Judaism or Islam, but as a Christian, I love the way it portrays this epic and wonderful story.  It’s beautifully animated, acted and the music is likewise fantastic. I also feel like the Road to El Dorado, Spirit and Sinbad the Sailor should also be mentioned as Dreamworks classics from this era.

#15 How to Train Your Dragon

This is another one that comes from a studio and a string of amazing films; Kung Fu Panda, Mega Mind and Monsters VS Aliens all could have fit into this spot, but this is my favorite. Released in 2010, the film was directed by the same team that brought us Lilo and Stitch in 2002, Chris Sanders and Dean DeBlois.

How to Train Your Dragon pays homage to the genre of fantasy films and is based off a series of books by Cressida Cowell. Although the film is different than the books, Cowell was involved in some ways and felt that it was a fit with the spirit of the series.

It’s a hilarious film, but at the same time it takes itself and the world that it’s in seriously. I heard it referred to as that time that Dreamworks out-Pixared Pixar, which I love. I think it refers to the fact that normally, people don’t cry at Dreamworks films; Pixar is the studio with depth. In addition, the flight animation is amazing, inspired by aircraft maneuvers.

This one makes the list because of the story, although it was nominated for an Academy Award in 2002 (losing to Spirited Away. Fun fact, that same year, Disney’s Treasure Planet was also nominated).

The basic premise of Lilo and Stitch was really a risky one for Disney, focusing on the trials of two sisters who have recently lost their parents. The film looks at their changing relationship, the serious problems that they are facing and the addition of aliens into their lives.

The two sisters are very realistic as siblings and several cast members are actually Hawaiian (so they contributed to some of the dialogue). Additionally, Alan Silvestri worked with Mark Keali’I Ho’omalu on the score, adding a level of authenticity and an homage to Hawaiian culture.  The background also was made up of watercolors, calling to mind Dumbo (cheaply making a lot of money for the studio).

#17 Beauty and the Beast

This one is another one from a series of films that all could have been picked (Little Mermaid, Aladdin, and Lion King also are great, but this is my favorite). Released in 1991, Beauty and the Beast is proof that the third time’s a charm; Disney and his animators had tried to adapt the story in the ’30s and the ’50s. When The Little Mermaid kickstarted the Disney Renaissance, the new group decided to retry it.

This film used some of the techniques developed and used in the films in the late 1980s (particularly in The Black Cauldron, which just missed making this list). The Studio also used computers for the ballroom scene (while Angela Lansbury sang “Tale as Old as Time,” a song recorded in just one take). They had planned to use it more, but the technology was still too young.

Beauty and the Beast was nominated for an Academy Award for Best Motion Picture and it was the first Disney animated feature to use 3-D CGI backgrounds with the characters drawn in the traditional style.

RELATED: The Belle of the Beast

Released in 2010, Tangled was the first of the princess films to get a PG rating, rather than a G rating. It’s a unique film, though, in that the film was a 3D film that was created to feel like it was a 2D film. The producer, Glen Keane, wanted to “bring the warmth and intuitive feel of the hand-drawn to CGI,” and it shows.

The film calls to mind the earlier Disney films and adds new technology into the mix; this is particularly seen in the backgrounds where everything looks like a watercolor. IMDB tells me that the production team wanted the film to be so specifically done that a lot of the technology that was used had to be specifically developed.

RELATED: Behind the Grimm: A Very Tangled Journey

#19 The Hunchback of Notre Dame 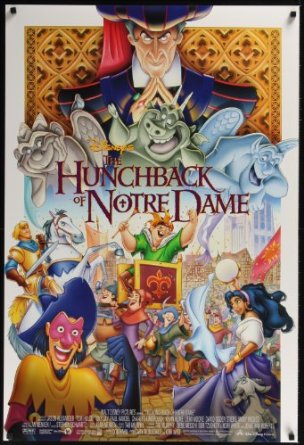 Brought to us by the same team that brought us Beauty and the Beast, The Hunchback of Notre Dame was released in 1996 and took advantage of the increasing ability of the Disney Studio to utilize the computer as an animation tool.

There are many moments that are a combination of CGI and 2D animated backgrounds, and some are just CGI. Hunchback also uses the multiplane effect that had been developed and used in Pinocchio. This gives the film and its backgrounds a very detailed, and more realistic, feel to me.

This film is also on this list because the story itself is a different approach than Disney typically takes. It’s a darker and grittier tale than typical Disney, fitting given its source material, and although the animation is gorgeous, it was a risky film for Disney to make (Hellfire, anyone?)

#20 The Princess and the Frog

The last 2-d animated Disney film, this one was released in 2009 and, in my opinion, is seriously underrated. Set in the mid-1920s, this was also the first time since Beauty and the Beast that every voice actor also sang their parts and the first hand-drawn Disney-film since 2004 (Home on the Range).

Not only was the animation beautiful, it was a return to Disney’s fairy tale roots and a musical. Also, funnily enough, the story goes that the animation styles were mostly based on Lady and the Tramp and Bambi.

The Princess and the Frog also gains a spot on this list because it was set in the 1920s in New Orleans and features a princess who is both the first African-American princess and one of the most refreshing princesses. Her goal is to own her own business, she works hard to get there and doesn’t want to take shortcuts, and the lesson that she learns is that it’s okay to have fun sometimes. That’s a moral that I feel I can relate to.

And that, my friends, is my list of the 20 most groundbreaking animated full-length animated features. I hope you enjoyed it! What films would you trade out or put in instead?

Our romance-themed entertainment site is on a mission to help you find the best period dramas, romance movies, TV shows, and books. Other topics include Jane Austen, Classic Hollywood, TV Couples, Fairy Tales, Romantic Living, Romanticism, and more. We’re damsels not in distress fighting for the all-new optimistic Romantic Revolution. Join us and subscribe. For more information, see our About, Old-Fashioned Romance 101, Modern Romanticism 101, and Romantic Living 101.
Pin this article to read later! And make sure to follow us on Pinterest.
Pages: 1 2
By Bailey Cavender on October 1st, 2015