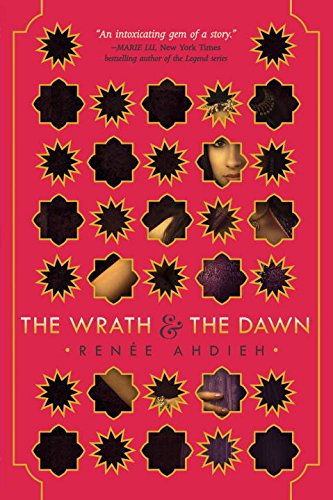 THE BOOK: The Wrath and the Dawn

The book world has been very excited about The Wrath and the Dawn by Renee Ahdieh since it came out this May. From the summary – who wouldn’t be? A strong, gorgeous, determined and blood-lusting heroine volunteers for marriage to a monster of a king in this retelling of A Thousand and One Arabian Nights. I for one, think that A Thousand and One Arabian Nights is super romantic – a king spends all night devoted and attentive to his queen, all because of her mind and storytelling ability? Sign me up, at least if you take away the whole “I will kill you if your story bores me for even a second,” because, well, pressure. The pressure is indeed on for both starring characters, Khalid and Shahrzad, in The Wrath and the Dawn, as they enter a marriage expecting the other to be dead by their hand. If you love the hate-then-love romances, this surely is up your alley.

SHAHRZAD: Hey Khalid my new husband, I only volunteered to marry you because I’mma kill you and cut you up! I am fierce and loyal to my best friend’s memory and my hazel eyes blaze with cunning and hatred!!

KHALID (quietly emanating hotness): I accept your hatred lovingly, for I deserve it. My burdened tiger-eyes indicate I am but a misunderstood and angsty character cloaked in terrible secrets.

SHAHRZAD: Ugh, I am falling for you, despite my awesomeness and my promise to kill you! This totally complicates things, and I must struggle with morality!

KHALID: ‘Complicated’ is my middle name. And also sometimes the people call me ‘Lady Killer.’

SHAHZAD: ‘Badass’ is mine, but you can slay me tonight if you know what I mean. *winks *

KHALID: I’d ask you to marry me, but we already are! #arrangedmarriagegoals

THE WRATH AND THE DAWN BOOK REVIEW

The Wrath and the Dawn just dives in to fearless sixteen year-old Shahrzad volunteering to marry the Caliph of Khorasan, the young and quiet Khalid, who kills his new wives via silk to their throats every dawn (death by silk is a great euphemism for suffocating). The people of this land, up until this point, seem to have been sort of pretending it is NBD that the Caliph’s wives keep dying, as they are powerless to do much but sweat (they’re in a desert climate!) in fear. Shahrzad, however, decides this is a big deal and that Khalid needs to die when her best friend is one of the new wives to die. By going on this revenge mission, she leaves behind her guy best friend, Tariq, who might love her and now is super determined to get her back from the evil Caliph’s clutches. (Love triangle, is that you I see there?)

Shahrzad is downright vengeful and plotting murder when the story begins, but as she keeps herself alive each night by spinning a tale to entrance her new husband until dawn, she finds herself becoming entranced as well. Khalid (quite accommodating for such a supposedly fierce murderer, I think) allows her to live, dawn after dawn, and she discovers that Khalid is way too stoically sweet, kind, thoughtful and hot to be a killer. Ok, his hotness might not contraindicate killing– but things aren’t what they seem, as the story unravels in lyrical writing and a lot of dialogue.

The real strength of this book (and what made me love it) is the relationship between Khalid and Shahrzad. The book is primarily a love story within a complex kingdom, and I was quite in the mood for this sweeping romance. Am I in the mood for a sweeping romance every day? Yes, but that is not the point. The point is that the romance was dreamy, because it was at once profound and conflicted while still a young, occasionally childish and cute, love!

Khalid is a silently angst-ridden, overly self-aware hottie with very hostile eyebrows and an Edward Cullen “I’m a monster, I loathe my sexy self!” complex. Shahrzad is a reckless, sarcastic and daring heroine who defends herself before anyone else can and never shuts up among scheming politicians or scary husbands, which is my favorite kind of character. Ahdieh’s natural dialogue between them as they undergo a tug of war to discover secrets about the other  – clever, probing, impassioned – is what makes the book a success. The swooning is too real as they fall, stumble, dive, and pull each other into love. (Side note: It definitely did not hurt -actually it helped greatly- that Khalid is my favorite type of fictional guy, the quiet, strong, noble king type who has a slow burn romance with a super chatty heroine of his dreams. Also, he likes to write. Be still my heart!)

The mark of a truly excellent book is its secondary characters, however, and The Wrath and the Dawn also manages to score here. The dialogue between Shahrzad and everyone she meets is coated in layers of well-worded distrust, and it was fun to watch her change from treating everyone at court venomously to becoming their friends. I especially liked supporting characters Jalal and Despina for helping to bring our angst-y lovebirds together. Additionally, their backstories were given development and their dialogue was humorous and inspiring.

“What are you doing to me, you plague of a girl?” he whispered.
“If I’m a plague, then you should keep your distance, unless you plan on being destroyed.” The weapons still in her grasp, she shoved against his chest.
“No.” His hands dropped to her waist. “Destroy me.”

It was especially sweet to see the slow burn romance with an already married couple. The arranged marriage trope allowed them to grow from hateful husband and wife who become reluctant companions and then passionate lovers thankful for their wedding vows! Their journey of love was brutal, however: Khalid – seemingly responsible for so many murders – feels he hardly deserves to love, and readers along with Shahrzad, look for his humanity. Shahrzad can hardly stomach having feelings for her best friend’s killer – in fact the most difficult part of the book is Shahrzad convincing herself and readers that it’s okay not to kill him. Ahdieh allows for readers to see both characters’ internal struggle with their feelings for the other by having multiple POVs, which was done well and was not confusing or irritating in the least. Shahrzad’s emotions pull the reader into the story as they move against her will from hatred to curiosity, to confusion, appreciation, and finally love. To push the wrench further into our hearts, Ahdieh’s nefarious plotting and world building poses the question: Even if they do love the other, can their love survive this kingdom? The author put so many plot devices into play (Do people have magic? Will Khalid use his skills as Caliph and the best swordsman in Rey to fix his crumbling kingdom? Can their love survive? Most importantly, will they use the MAGIC CARPET?!) for the sequel and I can hardly wait!

Finally, yay to diversity. As a brown and Muslim person, I was extra-thrilled to see a storyline filled with Arabic names and characters! In addition to a lovable characters, good dialogue and an original plot (within a familiar tale, of course) Ahdieh’s debut is full of romantic prose that works well with the poetry of her characters’ love.

Everyone had great eyes in this book, and Ahdieh ensured her readers would pine for the sequel by capturing us with romance, then thickening the plot in a kingdom rife with magic, secrets, a lot of political scheming, and very sharp swords. Also there is perhaps a love triangle, which I did not mention much in very biased fashion because I obviously ship a certain two characters. But seeing characters jealous was a great part of this novel, and I can’t wait for more. Of the story, that is. Also the jealousy.

Our romance-themed entertainment site is on a mission to help you find the best period dramas, romance movies, TV shows, and books. Other topics include Jane Austen, Classic Hollywood, TV Couples, Fairy Tales, Romantic Living, Romanticism, and more. We’re damsels not in distress fighting for the all-new optimistic Romantic Revolution. Join us and subscribe. For more information, see our About, Old-Fashioned Romance 101, Modern Romanticism 101, and Romantic Living 101.
Pin this article to read later! And make sure to follow us on Pinterest.
By Amirah Yasin on September 16th, 2015

3 thoughts on “YA Romantic Retelling: The Wrath and the Dawn”