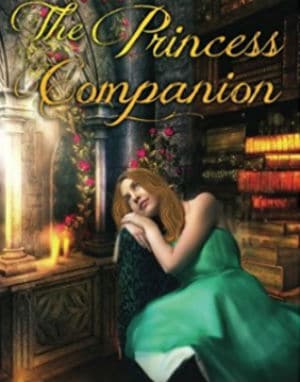 The Princess Companion YA Book Review

Fairy tale adaptations come in all shapes and sizes. From the dark and gritty to the happy and bright, there are fairy tales for everyone. Personally, when I see a new fairy tale retelling, I get excited. So when I saw that there was a retelling of “The Princess and the Pea” by Melanie Cellier, I knew I had to check it out.

There are fewer retellings of “The Princess and the Pea” than other fairy tales. The Princess Companion does not disappoint. The story follows a woodcutter’s daughter who finds herself among royalty with unexpected results.

Lost in a storm, our heroine, Alyssa, finds herself at the Winter Castle of the royal family of Arcadia. She is mistaken for a princess and brought to the guest rooms prepared for a royal visitor. These rooms include the pea under the mattress that we expect from “The Princess and the Pea.” This pea is magic and a gift to the queen from her fairy godmother. Because of the pea under her mattress, Alyssa doesn’t have a comfortable night’s sleep. She’s too polite to complain, however, so she just tries to move on with her life.

Before she can leave, she meets Lily and Sophie, the two little princesses. These two decide that they like her. As a result, the king and queen hire Alyssa as a companion for the princesses. Living in a place very different from the forest she grew up in, Alyssa struggles to find her place in this new world. Meanwhile, the kingdom is suffering famine and disease. With a prophecy that a marriage of true happiness in the royal family will save the kingdom, Prince Maximilian is facing pressure from his parents to find a bride.

From spending time together, Max and Alyssa grow closer. As they do, she struggles with her attraction to him. They both know that other princesses are coming to met the prince. While there, they all try to pass the queen’s mysterious test, but no one can. Alyssa just hopes they have fixed the broken spring in the princess room, still not realizing what the pea is or means.

Meanwhile, an outside threat to Arcadia creeps closer. The arrival of Princess Ava throws the palace into further chaos. With assassins, plots, and conflict in the royal family, there is a lot going on. Will any princess feel the pea under her mattress? Who is behind all the plots against Arcadia? Can Alyssa and Max find a way to be together? Will their stations in life keep them apart? Why is the queen so obsessed with her son finding a true princess? Read The Princess Companion to learn why!

The Princess Companion is the first in a series that includes two other books and a novella. Taking on a challenge, each book is based on a fairy tale that is not usually adapted. This makes the story that much more interesting. Each of the books is set in the magical Four Kingdoms.

This story is told from Alyssa’s point of view, so while we have an excellent sense of who she is as a character, it’s a little harder to get a grasp on the other characters. We just see them as she sees them. Cellier deals with this by giving us a couple of chapters from Prince Max’s point of view. This not only gives us an idea of what is happening during times when Alyssa was not present, it also gives us a better glimpse into his character.

Our two main characters, Alyssa and Max, are fun. Alyssa is our main narrator. She is resourceful and determined. Despite that, she still has enough character flaws to be a realistic narrator. Max is a character who starts out a bit spoiled. As the story goes on and we get to know him, he thaws into a personable prince who legitimately cares for the people around him, including his family and Alyssa herself.

Although it’s pretty clear from the beginning who the main romantic couple is going to be, it was still fun to watch their love grow. The romance in The Princess Companion is well-woven. Alyssa and Max have the kind of old-fashionedTThe romance that I enjoy reading. They start out as friends and grow more and more in love as the story progresses. Of course, there are obstacles that the two face, but that only makes the romance seem sweeter.

Although the main story is between Alyssa and Max, the king and queen also have a romantic subplot. Despite not seeing how it began, as the novel goes on we learn that the queen’s nickname is Ella and that she has two awful stepsisters. I bet you can see where this is going.

The story unfolds in a very satisfying way. Because Alyssa is telling the story, the reader finds out things out as she does, so we put the pieces together gradually. This keeps the reader guessing and invested in the plot. This, along with the description of Arcadia, makes The Princess Companion a book well worth the read. The descriptions are enough that you can create your own view of these magical lands, while still leaving room for the sequels to tell their stories.

If you’re looking for a story with intrigue, romance, and some humor, this is one to check out. If you like fairy tale retellings, “The Princess and the Pea,” romance, rags to riches stories, and stories with a more gradual romance, you might really like The Princess Companion. It’s a really fun read that is worth the time and falls in the middle of the happy and bright versus dark and gritty fairy tale spectrum.

I think I say this every time, but as long as the author is involved in adapting the story into a movie, this could be magical. This is a story with a variety of characters and as long as we have a way for the story to get into Alyssa’s head, I think this could be a fantastic film.

For casting, I imagine Logan Lerman as Max, Molly Quinn as Alyssa, Scarlett Johansson as Queen Eleanor, Arthur Darvill as King Henry, Lily Collins as Ava, and Gracie Prewitt and Ariel Gade as Lily and Sophie.  For some reason, I imagine the king and queen as younger, though that might just be me. Also, I don’t have the other characters set in my mind yet, so if you have any casting ideas, let me know in the comments!

Content Note: There are some moments of peril, but the fact that it’s told in first-person makes it less nerve-wracking. Since Alyssa is recalling the events that led to her wedding, we know from the beginning that there will be a happy ending. It’s the how that keeps readers on their toes.

Our romance-themed entertainment site is on a mission to help you find the best period dramas, romance movies, TV shows, and books. Other topics include Jane Austen, Classic Hollywood, TV Couples, Fairy Tales, Romantic Living, Romanticism, and more. We’re damsels not in distress fighting for the all-new optimistic Romantic Revolution. Join us and subscribe. For more information, see our About, Old-Fashioned Romance 101, Modern Romanticism 101, and Romantic Living 101.
Pin this article to read later! And make sure to follow us on Pinterest.
By Bailey Cavender on April 24th, 2017