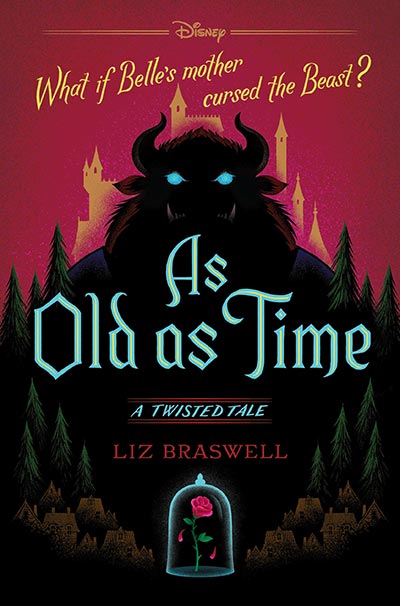 Writing for the Disney Company, author Liz Braswell has released three books in her Twisted Tales series. These books are A Whole New World, Once Upon a Dream, and As Old As Time.

Braswell’s “Beauty and the Beast” retelling, As Old As Time, takes readers on an alternate journey through the Disney tale we know and love. There are a lot of similarities, but there are also quite a few changes. Braswell is answering two questions, and this changes some things. These two questions are: what if Belle’s mother cursed the Beast? And: what would have happened if Belle had touched the rose?

These two details completely shift the way the story plays out and makes for a much darker reimagining of the fairy tale. In addition, we learn why the townspeople have forgotten about the Beast and the castle, and what exactly happened between Belle’s mother and Beast’s parents. The insane asylum also plays a much larger role in the book. This causes the story to take a much darker turn.

Belle’s mother Rosalind the Enchantress, is one of a group of magical people. She lives in a small kingdom near France and soon she meets and falls in love with an inventor named Maurice. As time passes, there is a plague and magical people begin to disappear. Fleeing to France with her family, she will return later and curse the prince before vanishing.

The other change in the story occurs because Belle touches the rose. When she touches it, it dies and this speeds up the curse. Belle and Beast have to work together to break the spell before it is too late. As they work, they learn about what happened in the kingdom before Beast’s parents died.

In Braswell’s story, Belle and the Beast are very similar to their animated selves, though both are a little more logical. The supporting characters change the most, getting fleshed out and given back-stories. To me, this raises the stakes and makes the story stronger.

The main relationship, that of Belle and the Beast, feels a little rushed at times. Somehow, though, it still works. Belle and Beast just happen to fall in love while all the other stuff is happening. The ending of the novel was unexpected, but I thought it was romantic. It also fit these two characters very well.

Although it is a lot darker than the original Disney film, As Old As Time answers a lot of questions I had about the story in new and unexpected ways. It’s written in the spirit of the Disney movie, even using some of the same dialogue. The plot gradually unfolds and keeps readers guessing until the very end of the novel, with plenty of twists and turns along the way.

This is a clever, solid read. If you like fractured fairy tales or darker retellings, you will probably enjoy this book. And if you love “Beauty and the Beast,” I’d recommend giving As Old As Time a try.

If this is going to be a movie, it needs to use the same actors as the live-action Beauty and the Beast and done in a similar style. Since the book was published by Disney, they would have to release the film as well. It just makes sense!

Content Note: There are some very violent and disturbing moments, especially toward the end of the book and in the insane asylum.

Our romance-themed entertainment site is on a mission to help you find the best period dramas, romance movies, TV shows, and books. Other topics include Jane Austen, Classic Hollywood, TV Couples, Fairy Tales, Romantic Living, Romanticism, and more. We’re damsels not in distress fighting for the all-new optimistic Romantic Revolution. Join us and subscribe. For more information, see our About, Old-Fashioned Romance 101, Modern Romanticism 101, and Romantic Living 101.
Pin this article to read later! And make sure to follow us on Pinterest.
By Bailey Cavender on March 22nd, 2017