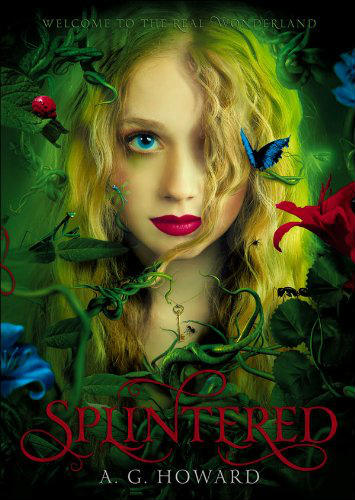 There are some books that grab their readers and refuse to let go. These stories drag us down a rabbit-hole of adventure and fantasy, and usually stay with us for a while. A.G. Howard’s Splintered is one such book. A retelling of Alice in Wonderland, Splintered follows Alyssa Gardner, a descendant of Alice Liddell. Alice Liddell was the actual inspiration for Alice in Wonderland. However, in Howard’s story, Alice dies in an insane asylum.

Alyssa’s mother is in an insane asylum too, and Alyssa is afraid that she too is going mad. Her ability to hear bugs and plants talk is very unsettling, and the rest of Alyssa’s life is anything but calm. As her mother’s grasp on reality gets worse, Alyssa also finds herself fighting with Jeb, her best friend. Jeb is dating a girl who makes Alyssa’s life miserable, and Alyssa’s crush on Jeb makes everything worse.

When Alyssa realizes that she and her mother aren’t mad, but are magically connected to Wonderland, she goes down the rabbit-hole with Jeb on a quest to prove to the world that her mother isn’t crazy, and to prove to herself that she isn’t insane. Of course, Wonderland is a little different than we remember reading, and is full of dark twists and turns. Alyssa has to restore Wonderland to its former glory, and prove her own worth, to get herself and Jeb back home.

As Alyssa learns more about her family’s past, her own abilities, and the events that led to Wonderland’s change, she finds herself torn between two men and two worlds. On one side is Jeb and our world, and on the other side is Morpheus, her magical guide to Wonderland, and Wonderland itself. I’m normally not a huge fan of love triangles in books. I think that sometimes they can go on for too long, but in this case, I liked it. Although I had some problems with both Jeb and Morpheus as characters, I liked the way this played out. The love triangle didn’t take away from the main conflict, it helped effectively showcase Alyssa’s conflict about where she belongs. This, I think, is what a good love triangle does, and I really appreciated it.

Splintered is imaginative, dark, suspenseful, and romantic. If you like fairy-tale retellings that aren’t afraid to be a little dark at times, this might be a book for you. It reminds me a bit of Tim Burton’s Alice in Wonderland, only different. It’s something uniquely it’s own. Howard’s writing draws readers in, paints a picture, and gets them invested in the lives of all of her characters. Howard has also written an adaptation of The Phantom of the Opera and several short stories about the characters in Splintered. Even if Splintered isn’t your cup of tea, I’d recommend checking out some of Howard’s other works.

I think that Splintered would be amazing as a movie, but Howard would need to be directly involved in it. It has the right amount of description that it would translate well onto the screen, and the characters are compelling enough that they could carry a film. The only thing that could be a problem is the issue of the first person narrator, though I suppose voice-over would be a way to address that issue. There would also need to be a clear distinction between Wonderland and our world in color and style. Finally, using make-up for the effects would be better than CGI, I think.

Our romance-themed entertainment site is on a mission to help you find the best period dramas, romance movies, TV shows, and books. Other topics include Jane Austen, Classic Hollywood, TV Couples, Fairy Tales, Romantic Living, Romanticism, and more. We’re damsels not in distress fighting for the all-new optimistic Romantic Revolution. Join us and subscribe. For more information, see our About, Old-Fashioned Romance 101, Modern Romanticism 101, and Romantic Living 101.
Pin this article to read later! And make sure to follow us on Pinterest.
By Bailey Cavender on October 15th, 2016