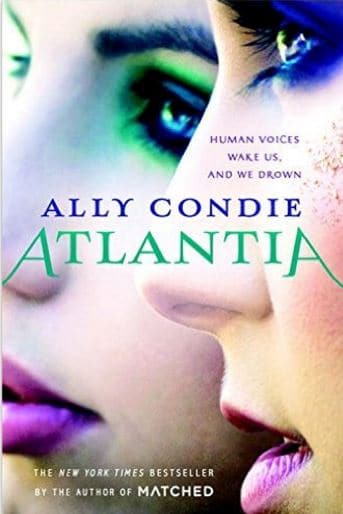 I really wanted to like Atlantia. What’s not to like? Sirens, underwater societies, romance, at least, that’s what the book promised. Atlantia takes place in the distant future in which the air has become so polluted it is dangerous for people to live on land. That’s right, it’s another dystopian society. In Ally Condie’s artfully designed world, there are two kinds of people, those who stayed ‘above’ and those who live ‘below.’  The story follows Rio, the daughter of the late Minister, which is like being both the mayor and the pope of the underwater city, as she deals with her mother’s death and her sister’s decision to leave Atlantia for the above. Rio always dreamed of going to the above but now that her sister has gone above, she never can and is left totally alone.

RELATED: 5 Must Read YA Dystopian Novels

Honestly, the book did not live up to the blurbs on the back cover. The story itself was interesting but the characters were so flat it was hard to root for them. I often find that to be true in books told from the first person. The main character, Rio, lacked defining traits. To me, she felt like nothing more than an empty shell for the reader to fill with her own hopes and desires. Stylistically, this can work in the YA genre, but in this case, I felt the approach fell flat in this particular story.

The romance I was promised fell flat as well. Instead of meeting the love interest and feeling a flutter of butterflies, or blue-winged bats as the story might call for, or even a pair of friends steadily falling in love, I received a boy immediately falling in love with a girl he know nothing about and a girl who just decided to love this boy in one day. That’s really what it felt like. Unbelievable. And I mean that. I found the romance entirely unnecessary. The story could have been told without it and probably should have been. The romance was so sudden and so forced that I believe there were several early drafts that did not even contain a romantic lead and focused only on the sisterly bond that connected Rio to her twin.

The world, however, was beautiful. I could walk the streets of Atlantia for days drinking in the colorful scenes and still find new beautiful things to explore. In her own elegantly simple way, Ally Condie built a magical world that felt just as real and wondrous as this one. She wrote with such longing for the work above that I felt the need to go out and touch a tree, feel the sand beneath my feet, and enjoy all of those things I often take for granted.

Overall, I give the book 3 corsets for having an interesting premise with mediocre characters. Only read if you dream of living under the sea.

Have you read Atlantia? What were your thoughts? Did you find the romance better than I did? Let me know in the comments below.

Our romance-themed entertainment site is on a mission to help you find the best period dramas, romance movies, TV shows, and books. Other topics include Jane Austen, Classic Hollywood, TV Couples, Fairy Tales, Romantic Living, Romanticism, and more. We’re damsels not in distress fighting for the all-new optimistic Romantic Revolution. Join us and subscribe. For more information, see our About, Old-Fashioned Romance 101, Modern Romanticism 101, and Romantic Living 101.
Pin this article to read later! And make sure to follow us on Pinterest.
By Katrina Daroff on March 4th, 2016

2 thoughts on “YA Book Review: Atlantia – A Dystopian Story Under the Sea”