Confession: I was skeptical of Wonder Woman, the latest superhero movie from Warner Bros. and DC Entertainment. Recent films were, to put it mildly, disappointing. Admittedly, I’m not a comic book reader. However, I do enjoy superhero movies (loved the Dark Knight Trilogy) but recent releases from DC Entertainment fell flat. They missed the mark for me – an average viewer without any background in comics. Yet, while I was skeptical about Wonder Woman, I also had high expectations. After all, this was the first time since 2005 a superhero film would be female-led. Needless to say, I really wanted this movie to succeed.

For so long, the superhero genre has been dominated by male characters. As a woman and mother to a seven-year-old daughter, I was hoping for a movie that would inspire generations to come. Specifically, I was hoping for a film that would inspire courage, empathy, and loyalty. Patty Jenkins’ Wonder Woman….Gal Gadot’s Wonder Woman…..was everything I hoped it would be, and more.

Warning! Very minor spoilers below, so if you prefer to remain spoiler free, proceed with caution!

Wonder Woman is, above all else, an origins story. Told in a flashback, it begins on the hidden island of Themyscira. Despite an over-protective mother, Queen Hippolyta, Diana feels drawn to the warriors of the island. She wishes to train yet her mother forbids it. So, in secret, Diana trains with her aunt and legendary warrior, Antiope. Eventually, Queen Hippolyta relents and Antiope begins training Diana in earnest. She trains Diana to become their greatest Amazon warrior. Diana’s skills grow until one day, she defeats every warrior on the island, including Antiope.

As if the Gods knew she was ready, on that very same day, American spy Steve Trevor crashes off the coast of Themyscira. Diana saves his life (a little bit of influence from The Little Mermaid) and learns of the war ravaging outside her protective bubble. Despite her mother’s misgivings, Diana leaves her island home. What follows is a sweeping tale of discovery and empowerment.

The success of Wonder Woman is due, in large part, to Gal Gadot.  She is utterly fantastic as Diana. That, by the way, is an understatement. Gadot inherited a role made iconic by Linda Carter and transformed it into something new and uniquely hers. Gadot infuses a warmth and sense of wonder in Diana. Her arrival in London mixes a charming naiveté with honest observation. Diana’s reactions give each scene an air of authenticity. This innocence, however, does not detract from Diana the Amazon Warrior. On the contrary, Gadot adds just the right notes of vulnerability at exactly the right moments. Thus, when Diana at least meets her nemesis, the lessons she’s learned merge with the warrior she trained all her life to be. The result is inspiring.

While no one compares to Gadot, Robin Wright comes this close. Stealing scenes at the onset, Wright’s portrayal of Antiope is fierce. There is no softness in this warrior. She is, first and foremost, a protector. Yet, there is pride in Diana and certainly, love. A role model and a teacher, Antiope passes her devotion to duty on to Diana through training. It is she that sets Diana on the path to greatness. Robin Wright is phenomenal in this role.

Chris Pine is amazing as Steve Trevor. He truly understood his role was secondary to Gadot’s. Nonetheless, Pine managed to create a charismatic man confident in his own abilities and able to appreciate a woman’s power. Steve is at turns serious and humorous which is a delicate balance. Too much of one emotion and the character is boring. Too much of the other and he becomes a caricature. Pine walks that line brilliantly.

The romance between Steve and Diana is sweet. It is certainly not the focal point but neither is it an afterthought. Instead, it’s one of the themes that shapes Diana. The chemistry between Pine and Gardot is wonderful. Their banter is electric and watching the dawning awareness between the two is a lovely side-story that complements the overall movie. However, what I appreciate most is that the romance didn’t become the center of Diana’s life. She maintained her independence in both thought and action.

I cannot rave enough about Wonder Woman’s action scenes. More often than not, action sequences go on just a beat too long. Yet, Wonder Woman hit all the right notes. Just when I was ready for the action to end, it did. In addition, by mixing real time with slow-motion shots, there was a great sense of power and strength that didn’t overwhelm. I applaud director Patty Jenkins. Her vision of the film saturates every frame. As a result, Wonder Woman isn’t just your average line ’em up and knock ’em down action movie. It is a story. There is a truth to Wonder Woman we don’t often see in superhero movies. 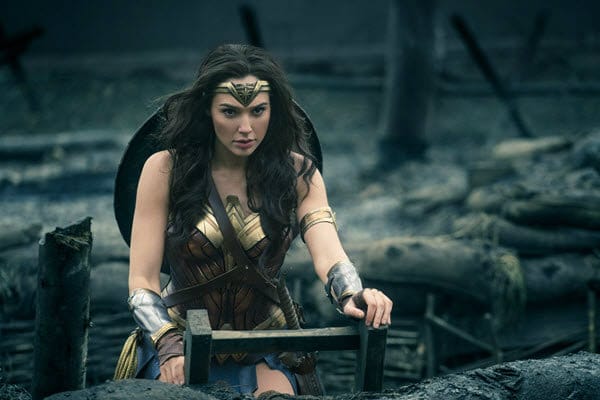 I’m sure there are some that could nitpick this movie just to say there was some fault in it. They would certainly need to dig hard. Wonder Woman was truly an experience. Jenkins’ vision made Wonder Woman a relatable, inspiring story. It was empowering to just watch this story unfold on the big screen. Its success also lies in the film’s simplicity and, as I said above, the perfection of casting Gal Gadot as Diana. Along with a superb cast of supporting (and eclectic!) characters, Wonder Woman soars and is sure to become a classic.

Content Note: Rated PG-13 for sequences of violence and action, and some suggestive content. Unfortunately, my seven-year-old children will have to wait before they see this film. Still, when they do, it will be just as powerful and relevant as it is today.

(Scroll down for the Full Romanic Period Drama Breakdown!)

Our romance-themed entertainment site is on a mission to help you find the best period dramas, romance movies, TV shows, and books. Other topics include Jane Austen, Classic Hollywood, TV Couples, Fairy Tales, Romantic Living, Romanticism, and more. We’re damsels not in distress fighting for the all-new optimistic Romantic Revolution. Join us and subscribe. For more information, see our About, Old-Fashioned Romance 101, Modern Romanticism 101, and Romantic Living 101.
Pin this article to read later! And make sure to follow us on Pinterest.
By Catherine on June 19th, 2017