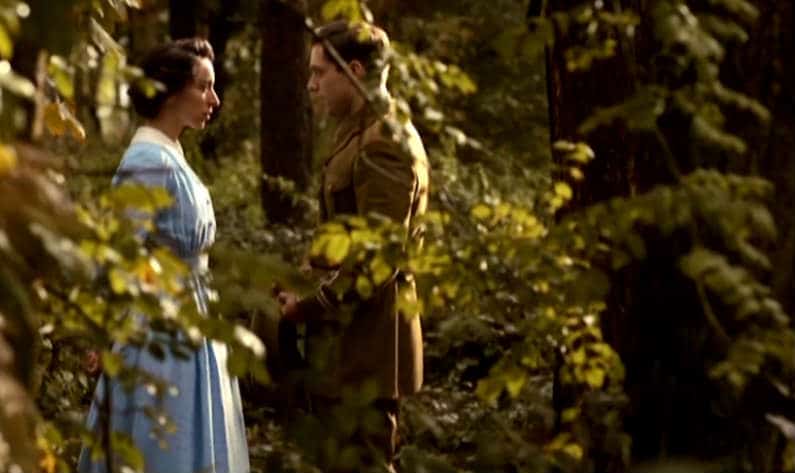 THE SHOW: The Crimson Field (PBS)

THE MOMENTS: Anton and Joan prove their deep love for one another; After weeks of tension and almost confessions, Captain Gillan and Kitty finally get to the heart of their relationship.

BBC has rolled out many wartime dramas instead of the more classic period dramas in the era of North and South or Austen. One of their latest was The Crimson Field, which turned out to be a beautiful six-episode series that, sadly, was cancelled without the promise of a second outing. The story follows a company of doctors and nurses battling to save the lives of wounded men in a field hospital in France. Because the two events are connected (plus I couldn’t choose which couple to feature), I am spotlighting two romances. The characters included are Anton Erhlich and Joan Livsey (a soldier and his fiancée, a nurse), and Kitty Trevelyan and Thomas Gillan. She’s a volunteer nurse and he’s a doctor with the rank of Captain.

Early on in the show, we learn Joan is harboring someone special who she keeps hidden and close to her heart in the form of a ring she wears on a chain around her neck. What we don’t know, is if this is because the man has died or simply because he’s at the front and she prefers not to be reminded of the danger he’s in every day. We later learn that he is indeed a soldier. Through an intermediary, Joan discovers her beloved Anton is alive. But the danger is Anton’s a German soldier. Were their relationship to be uncovered, he would be shot and Joan imprisoned. Anton leaves his regiment when he learns they are travelling close to Joan’s hospital and when the pair is seen, Joan is reported and held prisoner by military intelligence. She stands accused of helping her lover escape but refuses to give up any information on his whereabouts. 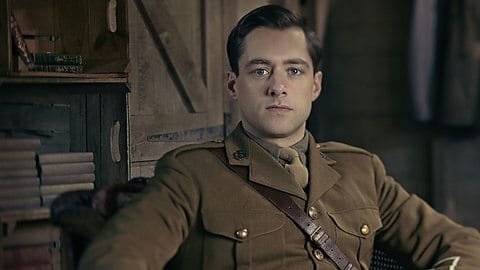 Then there is Kitty and Thomas. From the moment Kitty and Thomas meet, we sense there is something to come in their interactions. Kitty is the ice-queen character, who’s clearly harboring closely held secrets of her past (one that includes a child), whereas Thomas is the talented albeit frustrated doctor whose inventive medical articles are perpetually passed over for publication. Their first meeting isn’t the typical meet-cute, but there are obvious sparks. Days and weeks pass with stilted and little conversation before the pair experience a turning point. She begins to ever so slowly trust someone again. Thomas asks Kitty if she will meet him. Following a smile (a rarity on Kitty) and flirty banter, he tells her, “I’ve been alarmed since the moment you arrived.” (This is much swoon-ier on-screen than it sounds on paper… trust me.)

Their meeting time arrives and passes, and unfortunately, for Kitty, something comes up that prevents her from making that meeting in the woods engagement. When she returns to the hospital, Kitty has retreated to her calm, cool self. Perhaps missing their meeting plans was a good thing she surmises. She came here to work, not become entangled in a relationship… all of which she tells him immediately after he slowly leans in, about to kiss her. A gentleman, he says softly, “Understood.” This puts an end to their interaction, and what little there is, is awkward at best.

Be warned, what’s ahead will reveal major spoilers.

As Joan is being carted away to stand before a tribunal, Anton gives himself up. Struggling against her captors, she cries out, trying to touch him as he too is rushed and held back. Joan is sequestered to her room, guarded by the M.P.’s where Anton is allowed to see her. She begins to rush towards him, only to be held back by the guard. Anton too is kept away. 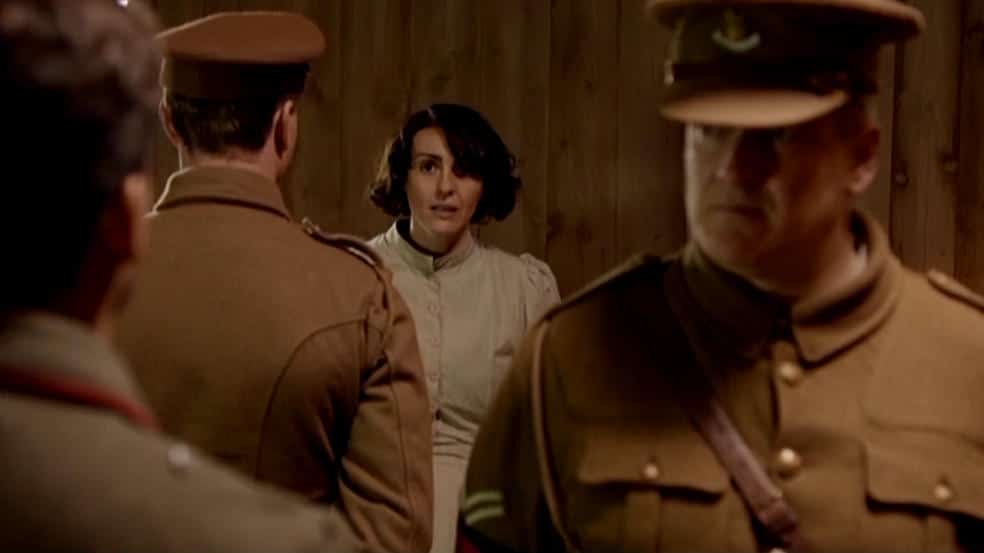 “What’s happening?” she asks him. 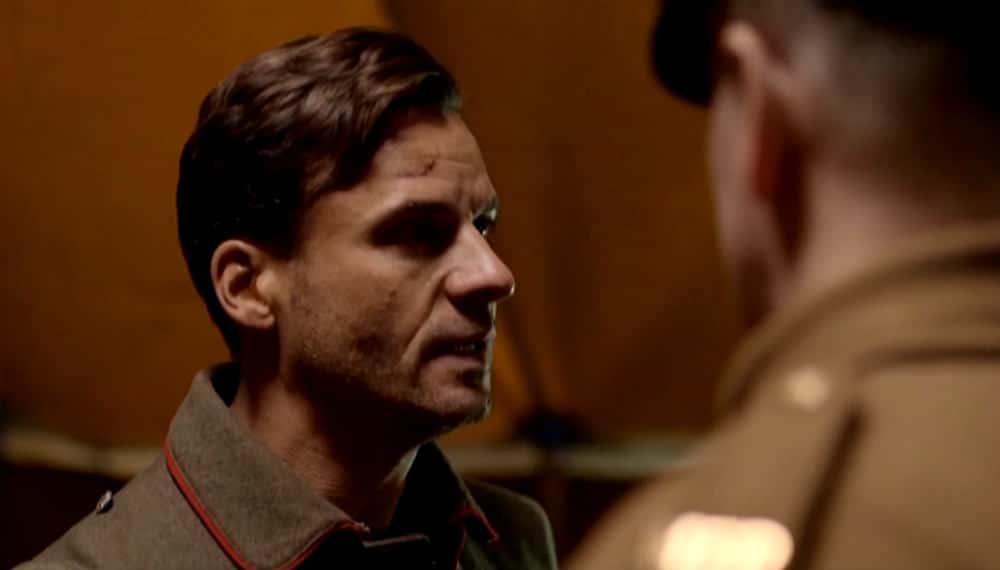 Turning to the guard, Anton asks if he can stand next to Joan, to which the officer emphatically replies that he cannot. Addressing Joan, he answers her question, “An arrangement has been offered. You would go home. You would be monitored, but you would go home.”

Understanding flickers across Joan’s face. This arrangement comes with conditions and her next question is more statement. “You would be spying for them.”

“And you think I’m going to let you agree to that?”

Easing her fears about this proposition, he continues with his reasons for considering it. “Joan, I am no longer an escaped prisoner. You will not be shot, but you will go to prison. Hard labor. For the duration at least. I really don’t want you to go to prison.” 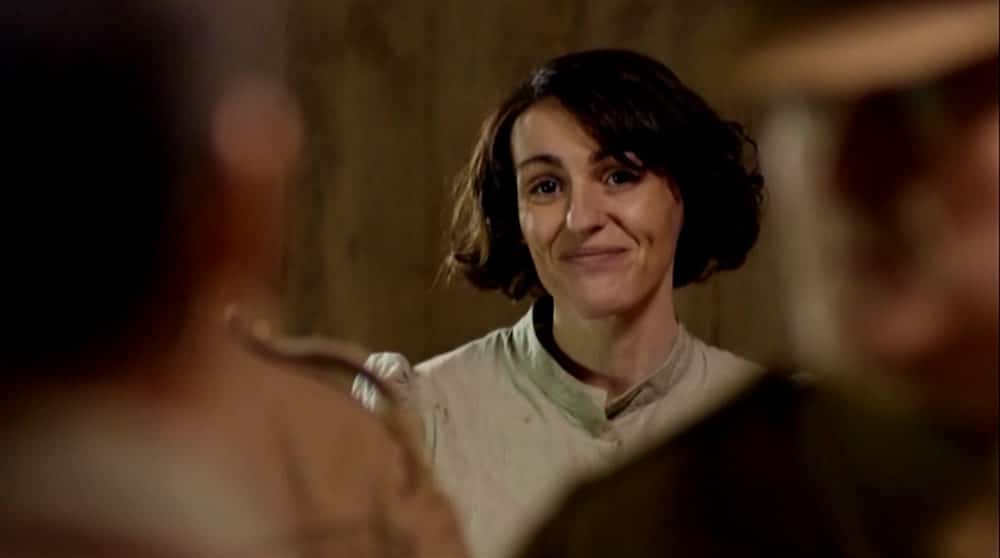 Not about to let him sacrifice anything, she counters with logic. “If you are caught spying for them, they’ll have you up against a wall. And you would get caught.” Taking a minute to remember how well she knows him, she continues with a sad smile. “Because you’re a hopeless liar.” She doesn’t care about prison and begs him not to take the deal – if he loves her at all, he’ll say no.

Understanding she isn’t going to be swayed, softly, he replies. “Then, liebchen, this is what I will tell them.” Looking at her, he asks the important question. “Are you going to marry me?”

Smiling through tears, breathlessly, she replies, “yes.” When his second attempt to stand with her is prevented, with a single statement, Joan attempts lightening their impending separation. “It’s only the duration. It can’t last forever.” 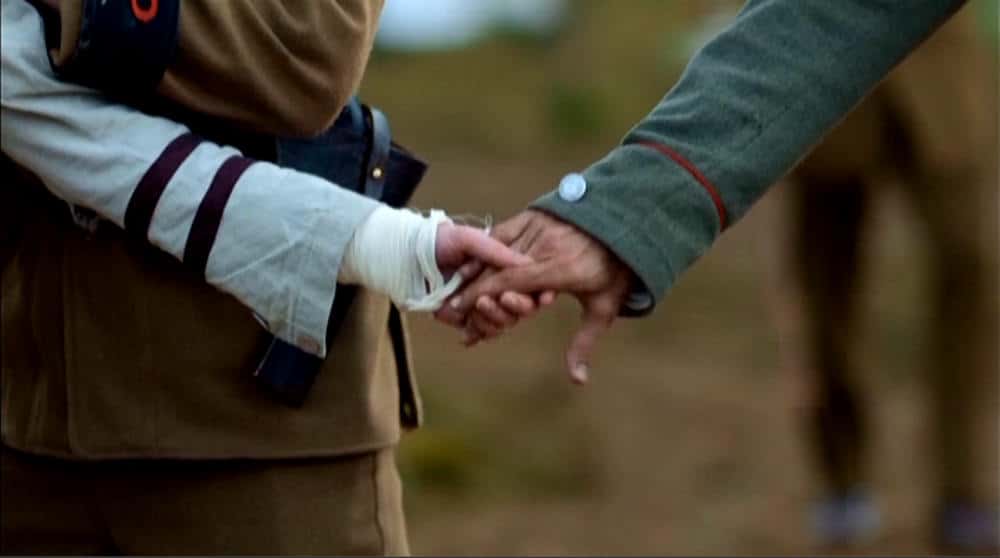 Holding each other’s gaze, both understand the hopeless days, months or years ahead of them, each wanting to take an image of each other with them to their respective prisons. Their bittersweet looks convey what they cannot through touch. As they are being separately hauled away, a last look is exchanged between them. Anton reaches out to take her hand and in a final act of defiance, Joan escapes those holding her just long enough to kiss her love.

Now that Thomas has backed down his pursuit of Kitty, she begins to see they have something she’s afraid of. But a potential danger she discovered by omission, a threat among their ranks and didn’t report threatens to again tear apart their relationship. When he finds out, Kitty naturally assumes he’s about to turn her in. Until they find themselves alone. 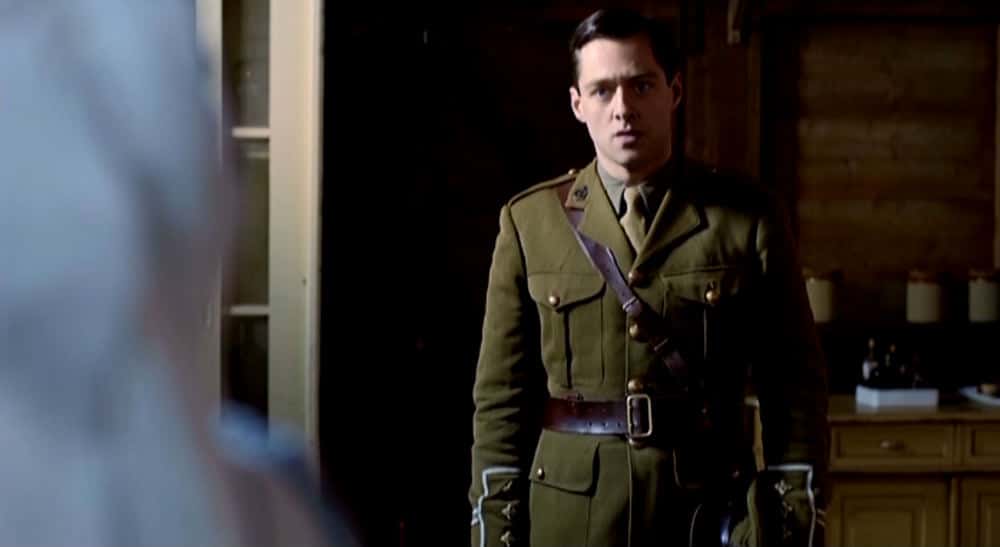 Walking into the room to see Kitty re-stocking medical supplies, he inquires about her reaction to seeing him speaking with the intelligence officers. “You thought I was bringing them straight for you, didn’t you?”

“You actually believed I would deliver you up and watch them drag you away?” He persists. “Why would you think that?” And finally, with passion and sincerity, he finishes. “You drive me mad, but I’d never hurt you.”

Taking his words in, Kitty nervously considers telling him something. Unsure where to start, she begins telling him she volunteered in France for a reason. Interrupting, he says, “I know. You’ve told me…” 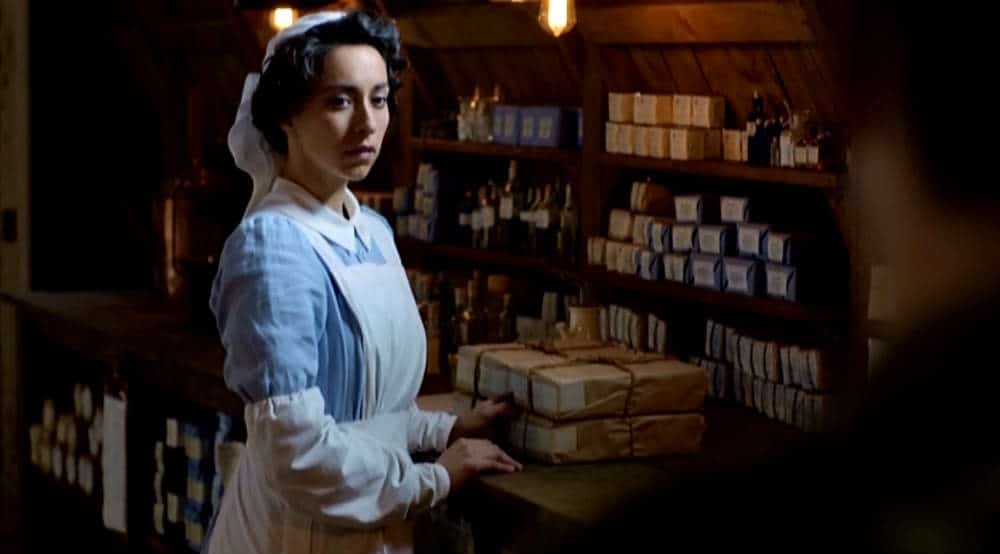 Determined not to think before telling him what she wants him to “understand,” Kitty continues. “The reason I came is because in England, I have a daughter who I’m not allowed to see.”

Processing, taking a moment before reacting he exhales and asks the logical question. “Why not?”

Forging on with her confessions – wanting him to understand her distance, she answers, “Because I made a terrible, terrible mess of things. I really made such a mess.”

With a whisper of a smile, he asks. “What’s she like?” 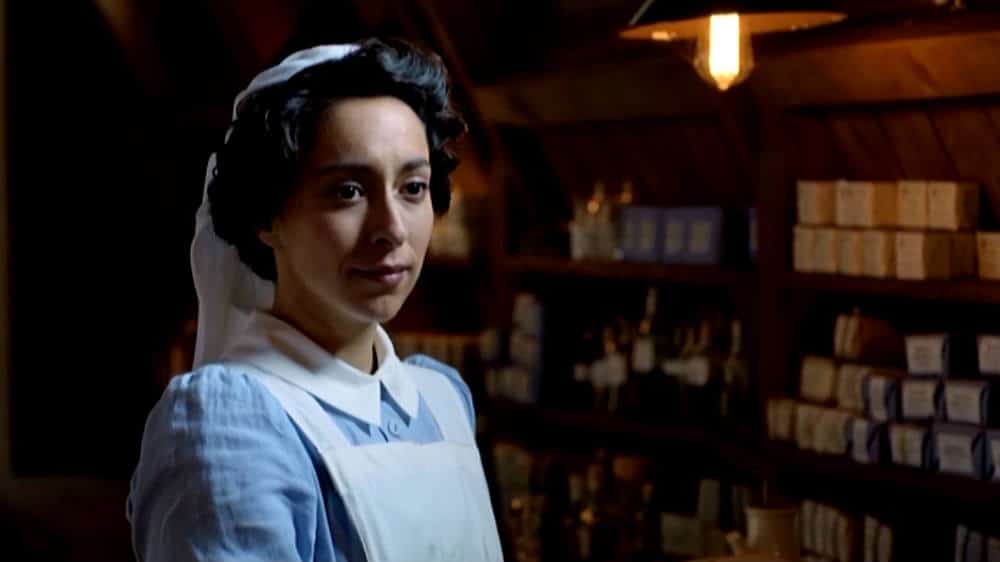 Noticing his genuine interest, Kitty remembers her daughter. She shares that she’s fearless and beautiful and wants a dragon for Christmas, a request he smiles at as if he can conjure up an image of the daughter of the woman he loves. 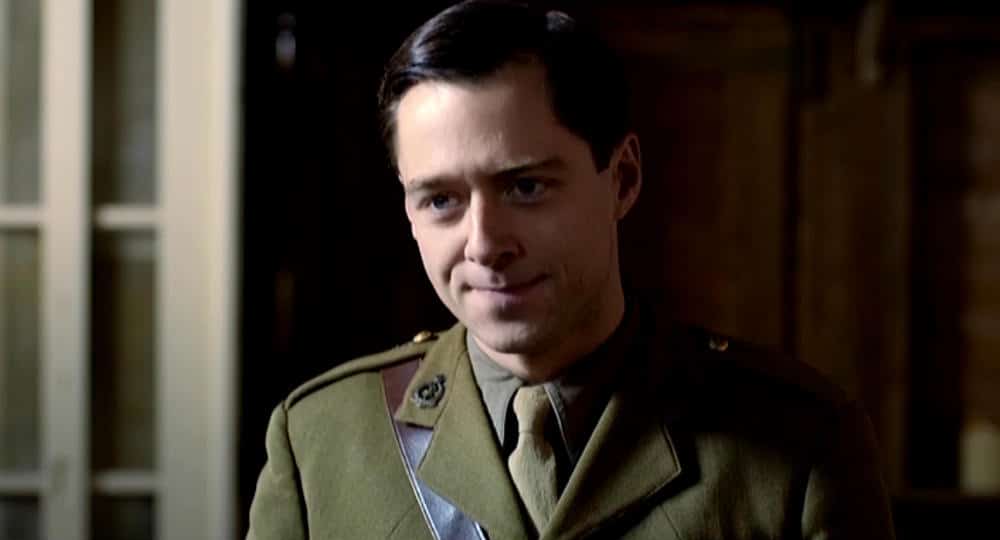 “I can’t think where she’d get that from,” is his reply. This makes Kitty laugh, and she wipes a tear from her eye. 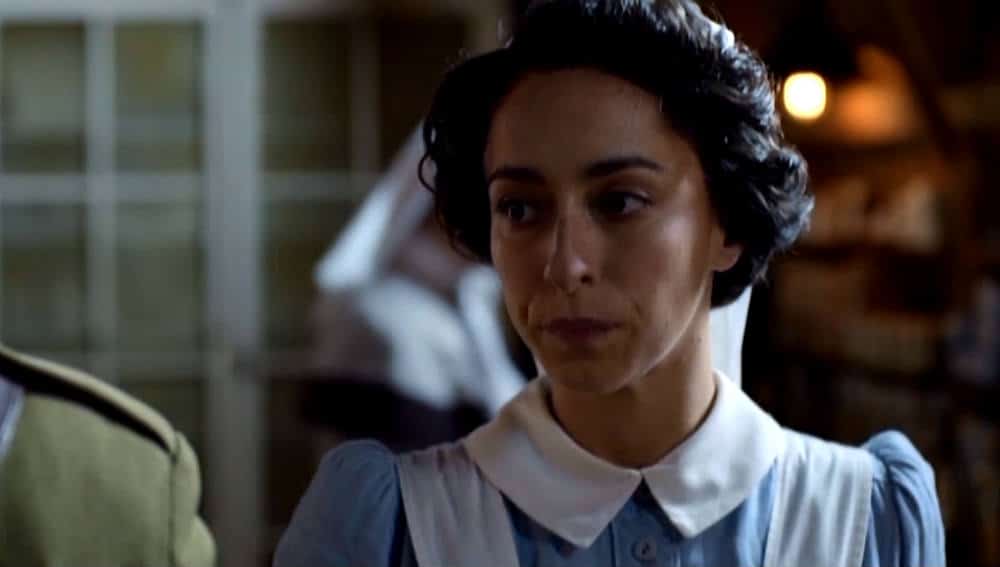 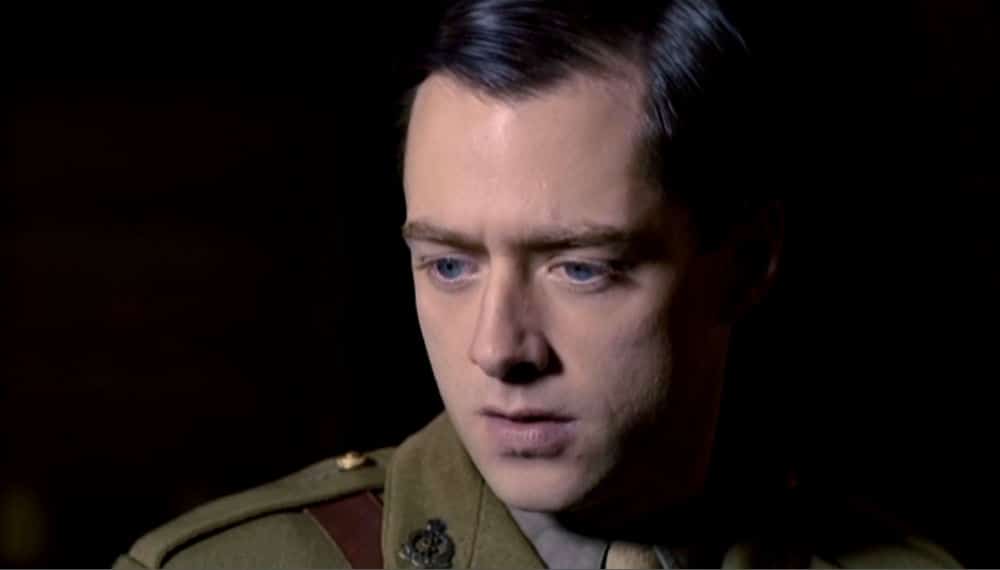 Just then, another person walks into the room, interrupting them. Quickly walking up to him, Kitty says, “Meet me. At the place you said before.” This referring to their prior meeting place she missed. “I’ll understand if you’re not there, but I’ll be there.” 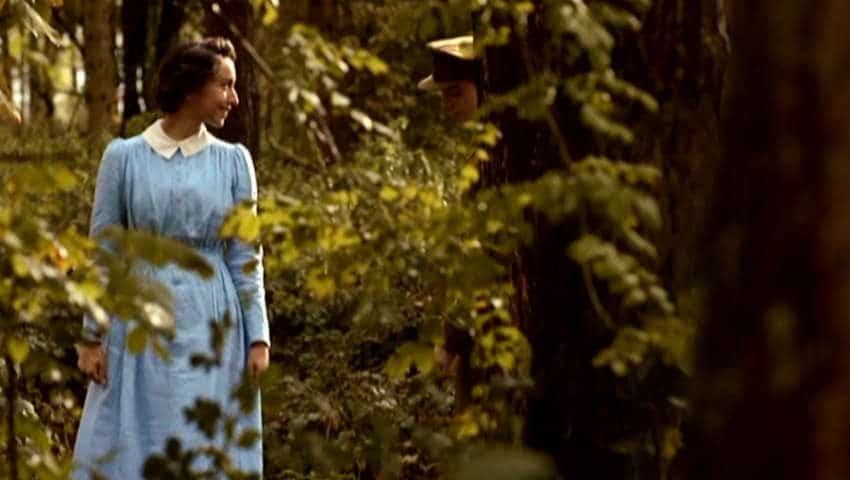 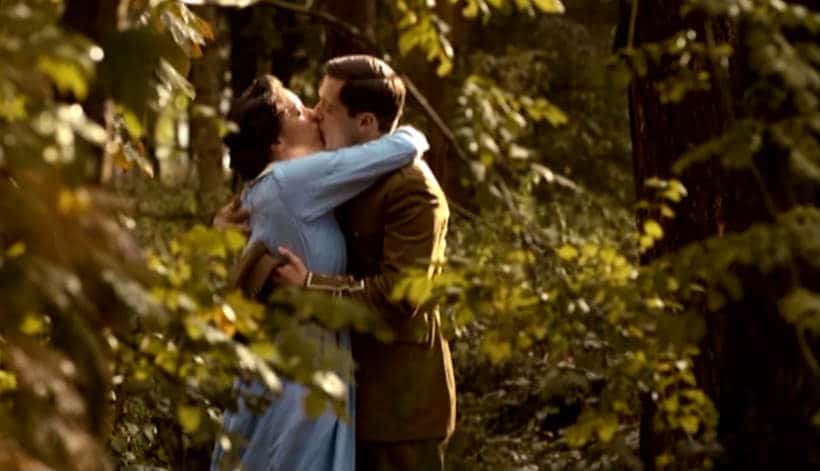 As the episode winds to a close, Kitty is alone standing in the woods. She sees Thomas before we do as evidenced by the joyful smile on her face and walking up to her, the pair exchanges no words. Instead, a nervous look is affixed on his face… but hoping he misread nothing in Kitty’s invitation, he leans in, closes the gap and impulsively kisses her. Her arms go around his neck and he pulls her closer, both swept up in the moment.

Two very different romantic exchanges take place in these scenes. One is more passionate whereas the second might not be considered classically romantic, but for the couple, its events were the ultimate kind of “romance.” Joan and Anton proved the depth and sincerity of their love for one another. It’s heartbreaking and inspiring in turn. Kitty and Thomas proved something different; she understood the importance of confessing her past and learning to trust someone else with her heart. It was what both needed before they could even consider the possibility of admitting what their hearts wanted. His feelings remained, and still he loved her sincerely and without condition.

Given its cancellation, we are unlikely to ever see what happens to either relationship beyond this. How did you feel about the way their respective stories end? Did you like Kitty and Tom’s slow-burn path it took to completion? What about Joan and Anton? Sound off down below.

Our romance-themed entertainment site is on a mission to help you find the best period dramas, romance movies, TV shows, and books. Other topics include Jane Austen, Classic Hollywood, TV Couples, Fairy Tales, Romantic Living, Romanticism, and more. We’re damsels not in distress fighting for the all-new optimistic Romantic Revolution. Join us and subscribe. For more information, see our About, Old-Fashioned Romance 101, Modern Romanticism 101, and Romantic Living 101.
Pin this article to read later! And make sure to follow us on Pinterest.
By Rissi JC on August 15th, 2015