Stories about arranged marriages are fascinating to me. I love watching the characters either fall in love gradually or fight tooth and nail against the whole idea. In When Dimple Met Rishi by Sandhya Menon, I got to see both!  This is a fantastic young adult novel full of humor and heart.

Dimple Shah is a young Indian American woman who has just graduated high school. She has been excepted to Stanford to study web design. Although she loves her parents, she’s frustrated with them often. Her mother is determined to find Dimple the I.I.H., or Ideal Indian Husband, while Dimple is too busy for romance.

RELATED: Set It Up – A Girl-Guy Meet-Cute Romantic Comedy in the Workplace

She wants to attend school, learn, and make a difference before she even thinks about settling down! When Dimple’s parents agree to let her attend Insomnia Con, a summer program for aspiring web designers, she’s convinced that this means they are beginning to understand her a little more. However, her parents have other plans for her summer.

Dimple is a modern young woman who is determined to change the world. She loves her family, is loyal to her friends, is extremely intelligent, and has a passion for web design. Dimple feels like she’s not ready to date or get married, and meeting Rishi throws a wrench in her plans.

Rishi Patel is a boy who loves tradition. He has grown up hearing about his parent’s arranged marriage that bloomed into love. When his parents suggest that he attend Insomnia Con to meet and begin to woo his future wife, he agrees. What Rishi doesn’t expect, however, is for his existence to come as a complete shock to his future wife.

Rishi is a romantic. When he realizes that Dimple had no idea who he was, he takes a step back. Soon, his easygoing and chivalrous nature make an impact on her.  As the oldest son, Rishi has decided to attend MIT to pursue a career in engineering, despite his talent as an artist. Rishi wants to honor his family and make them proud and feels like engineering is the best way to do that.

The Plot – When Dimple Met Rishi 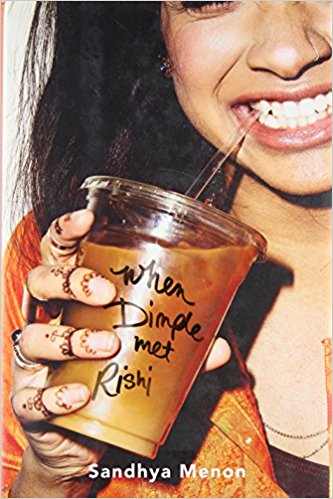 The story is told from the point of view of both Dimple and Rishi, following them through their summer together. Dimple and Rishi’s parents have been thinking about arranging the marriage between their children, but first, they decide to let the two meet. When Dimple arrives at her summer program, she’s shocked to find a boy who introduces himself as her future husband.

Not knowing who he is, she’s terrified and throws her coffee in his face. Soon, she learns the truth about who he is. Angry at her parents for not telling her about Rishi, Dimple is determined to ignore him. He’s fine with this because they are sure that there is no way they could ever work out.  Soon, however, they begin to spend time together. As the summer goes on, they learn more about life, love, and themselves.

When Dimple Met Rishi actually reminds me a lot of a modern Pride and Prejudice or The Lizzie Bennet Diaries. Dimple and Rishi both make assumptions about each other, and as they grow closer, they learn that they were wrong. Not only do their personalities complement each other, but they are both smart, driven, and passionate about the things they care about. The two of them gradually become friends, and then something more. However, no love story is complete without misunderstanding and heartbreak, and When Dimple Met Rishi is no exception.

Dimple and Rishi are wonderful characters. They feel alive and real. The two of them are also fantastic because they push each other to be the best that they can be, supporting each other and giving a push at times. The biggest conflict for Rishi is the pull between his passion and the job that he thinks is realistic. For Dimple, she’s torn between having a successful career and a relationship. In her mind, to have a relationship means that she will have to sacrifice her career, a career she is passionate about. Both of these conflicts are given the seriousness that they should have, while the tone remains light.

I also should mention the side characters. Dimple’s roommate Celia and Rishi’s brother Ashish are complex and interesting characters in their own right. They add a bit more perspective to the story, and also help push Dimple and Rishi to make hard decisions about life and love.

Although there are some serious discussions in the story, mainly related to the conflict between duty to family and following your passions, the story is as light and frothy as a good cup of coffee. When Dimple Met Rishi is a perfect book to read sitting in the sun. It made me laugh, it made me cry, it was, all around, a very sweet and compelling love story. If you like stories like Pride and Prejudice and Ten Things I Hate About You, you’ll probably enjoy When Dimple Met Rishi.

A movie adaptation of When Dimple Met Rishi would be wonderful. Sandhya Menon describes the world and her characters in such a clear way, it seems to be made for the screen. It’s a wonderful modern love story with a touch of realism. It could play out on any college campus in a major American city. Honestly, this would be a wonderful movie. I have no ideas for casting, but I am certain that Menon should be involved in any film that is made.

Content Warning: This would be a PG-13 movie. There are moments of teens partying and some sexual situations, though nothing explicit.

Have you read When Dimple Met Rishi? Who would you cast? Let me know in the comments!

Our romance-themed entertainment site is on a mission to help you find the best period dramas, romance movies, TV shows, and books. Other topics include Jane Austen, Classic Hollywood, TV Couples, Fairy Tales, Romantic Living, Romanticism, and more. We’re damsels not in distress fighting for the all-new optimistic Romantic Revolution. Join us and subscribe. For more information, see our About, Old-Fashioned Romance 101, Modern Romanticism 101, and Romantic Living 101.
Pin this article to read later! And make sure to follow us on Pinterest.
By Bailey Cavender on July 13th, 2018

2 thoughts on “When Dimple Met Rishi, a Sweet and Compelling Love Story”