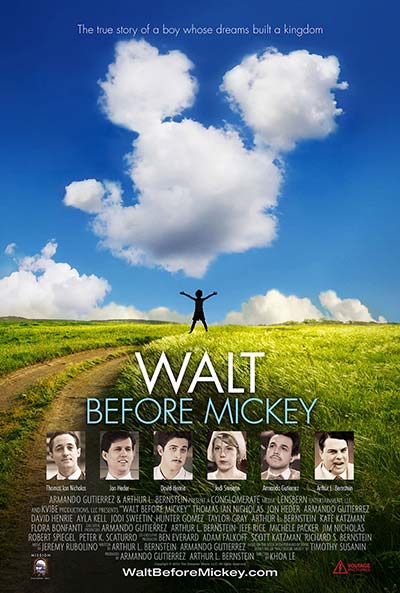 Walt Before Mickey, available today on Walt’s birthday, is a new period drama about the younger years of the visionary Walt Disney. What was life like for Walt before he created Mickey Mouse? This film explores just that question. Before his name became synonymous with brilliant animations, family films, and theme parks, Walt was just a man attempting to pursue his dreams, but like most people who are dreamers, success doesn’t come easily.

The film follows Walt mostly between the years of 1919-1928 and his attempt to start his own animation businesses, including the trials that come with these ambitious endeavors. With a father that always taught Walt to work hard, he becomes quite the dedicated worker. In fact, he becomes consumed with succeeding; his vision and dreams something that inspires other animators to join him without much pay (although Walt’s funds – or lack thereof – become a huge problem throughout the film for everyone that works for him).

Right out of the war, Walt’s optimistic attitude leads him to leave working for others behind and to start his own commercial art company. The progression from a young boy drawing on his barn wall, to Walt’s earliest businesses he started with the brilliant animator Ub Iwerks (responsible for the original artwork of Mickey Mouse) such as Laugh-O-Gram Films and then Walt Disney Studios, is inspirational for anyone attempting to pursue their own American Dream, a dream that first comes with several failures.

With each failure (at one point, Walt is evicted from his home, business, and loses everything), Walt just keeps on going, a trait most people just don’t possess. He never gives up. When he fails in Kansas City, he moves to California with his Aunt Charlotte (Jodie Sweetin) and Uncle (a man who doesn’t understand Walt’s unrealistic aspirations) and begins anew, eventually realizing that he needed to focus more on creativity than business, and smartly leaves that side to his financial savvy brother Roy (Napoleon Dynamite’s Jon Heder) who had been suffering from TB.

Based on the Disney family approved biography of the same name (“Walt before Mickey”), the amount of research put into Walt’s early years by Timothy S. Susanin is quite remarkable, and it is this research and story that makes the film adaption fascinating to watch. More than anything, Walt Before Mickey succeeded in making me want to learn more about Disney’s past and the steps taken to create such an iconic empire that indeed did start before Mickey Mouse. While likely somewhat dramatized for the movie, I did also love the appearance of Walt’s little mouse friend…

The journey of Walt Disney as performed by Thomas Ian Nicholas (anyone else remember him from A Kid in King Arthur’s Court?) is the true highlight of this indie film. He carries Walt Before Mickey with intensity, passion, and likeability. That being said, viewers should go into the movie knowing that this is not of the same caliber as Saving Mr. Banks when it comes to cinematography, costumes, and performance. The budget just isn’t there and neither is the script.

Some of the actors feel like they are acting (Jon Heder did not suit the time period in this one for instance) and part of the problem was the dialogue. It isn’t easy to write language suitable for the past, and in the process, sometimes the words come across as unnatural or slightly stiff. Weaknesses aside, the filmmakers do attempt to make up for it with heart and the Disney optimism.

It is in this optimism that helps Walt Before Mickey succeed and stand out from the much darker material permeating the theaters lately. Indeed, the quality and tone remind me of the made for Disney TV movies that used to air back in the late ‘80s and early ‘90s, a tone that gives this little indie film just a touch of nostalgia to add to its heart. Overall, if you love Disney, period dramas, and maybe even a little romance, you can catch the legendary story of the man behind a kingdom online (VOD) or pre-order the DVD available December 8th on Amazon or the official website.

Will you be checking out Walt Before Mickey? Sound off below…

I think this is the beginning of a beautiful

Our romance-themed entertainment site is on a mission to help you find the best period dramas, romance movies, TV shows, and books. Other topics include Jane Austen, Classic Hollywood, TV Couples, Fairy Tales, Romantic Living, Romanticism, and more. We’re damsels not in distress fighting for the all-new optimistic Romantic Revolution. Join us and subscribe. For more information, see our About, Old-Fashioned Romance 101, Modern Romanticism 101, and Romantic Living 101.
Pin this article to read later! And make sure to follow us on Pinterest.
By Autumn Topping on December 5th, 2015