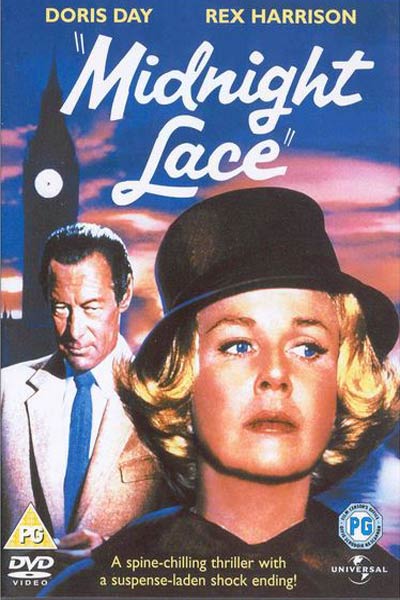 Movie fans alike know Doris Day was one of Hollywood’s most adorable and popular leading ladies for her roles in lighthearted romantic comedies and her signature singing in many of her films. But many of her fans don’t know of one of her most daring and out of character roles in the 1960 thriller “Midnight Lace.”

The film was a chance for Day to showcase her dramatic talents and take a break from her many comedies. She had previously starred in two similar thrillers: the Alfred Hitchcock classic “The Man Who Knew Too Much” and the lesser known “Julie.” After “Midnight Lace,” Day never starred in another thriller and stuck with what audiences and critics expected from her: humor. Still, out of the three, this film was considered her best dramatic performance.

Day portrays Kit Preston, a newlywed and American heiress whose husband, Tony, is played by Rex Harrison, known for his performance in “My Fair Lady.” The couple have been married for three months and Kit is still adjusting to living in London. Several humorous scenes depict her still not knowing how to count British money. Her husband owns a company and it is shown that he is a workaholic. They even had to delay their honeymoon to Venice due to his work. 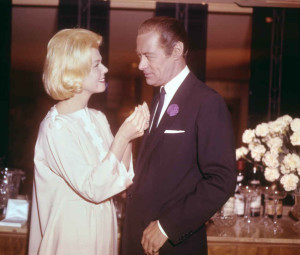 The film begins with Kit walking home in a thick fog when a strange and almost electronic voice startles her by calling her by name and threatening to kill her within a month. Kit runs home as the voice torments her through the fog, constantly telling her that she will die and he is nearby.

Kit returns home, terrified, only for Tony to consider it a practical joke and Kit begins to calm down but still seems worried. Kit seemingly putting the incident behind her, but starts taking the threat seriously again when she begins receiving phone calls from the same voice. We, the audience, don’t hear the voice; each time Kit becomes more paranoid and frightened.

When a falling girder nearly hits Kit as she is returning home from a shopping trip and the elevator breaks down in her building, Kit’s fears just keep growing, even though both incidents were shown to be accidents due to the construction of the building next door. Kit is saved both times from the contractor, Brian Younger, a WW2 survivor who seems to take a shine to Kit.

A man is seen several times throughout the film, either outside the Prestons’ apartment building or in the pub. He seems to be following Kit and even enters her apartment and terrifies her enough to call the police. Unfortunately, he disappears and due to nobody else seeing him, this only hurts Kit’s story and makes her other threats unreliable.

Tony, her visiting Aunt Bea and her friend and neighbor Peggy begin to wonder if Kit is making up the phone calls and threats to gain attention from her busy husband, as each call and incident happen after something upsets Kit. When Tony takes her to Scotland Yard, the inspector agrees with this theory and angers Kit with his attitude towards her stalker.

Peggy finally takes Kit seriously after she witnesses her fall in front of a double-decker bus and is barely missed by the driver. Kit informs her that she felt a hand on her back before she was pushed, adding to her fears that the killer is becoming more ruthless. Kit asks Peggy to lie to Tony about having heard the voice on the phone, so he may take her more seriously about the threats. Unfortunately, the time that Kit tells him that the killer called was when the phone was dead therefore ruining any chance she had of Tony believing her. 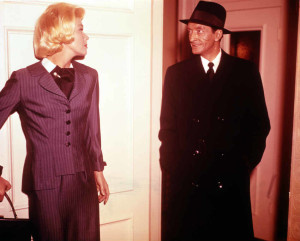 Several characters are shown to have motive throughout the film to want to torment Kit, including Younger who has dark memories from the war and is shown to have made phone calls from a close pub around the time Kit’s stalker phoned her home. Another suspect is her maid’s son, Malcolm who Kit is shown to have little tolerance for as he is lazy and constantly takes money from his mother. After he confronts Kit at the ballet and subtly asks for money for “his mother,” Tony catches him threatening her and considers him a suspect. The final suspect is an employee at Tony’s company and a former suitor of her Aunt Bea, Charles Manning. Tony’s assistant notices over a million pounds missing from the company, taken at various times and known for his gambling debts suspects him of stealing the money and threatening his wife. Day’s character doesn’t find out until the very last moments of the film who her killer is and why she has been targeted. 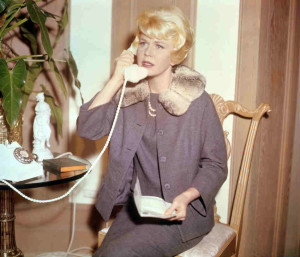 When the film was released, it received mixed reviews from critics who felt the terrorized wife in a film had become stale, but they were impressed with her performance, especially her most vulnerable scene where no one believes her about the voice and she crumples on the staircase into a hysterical sob. The film was certainly not what audiences expected, but Day was able to make us feel such sympathy for her character that we can almost feel her mistrust and paranoia ourselves as every man she sees becomes the terrifying voice on the phone.

Our romance-themed entertainment site is on a mission to help you find the best period dramas, romance movies, TV shows, and books. Other topics include Jane Austen, Classic Hollywood, TV Couples, Fairy Tales, Romantic Living, Romanticism, and more. We’re damsels not in distress fighting for the all-new optimistic Romantic Revolution. Join us and subscribe. For more information, see our About, Old-Fashioned Romance 101, Modern Romanticism 101, and Romantic Living 101.
Pin this article to read later! And make sure to follow us on Pinterest.
By Julia McCracken on February 20th, 2015