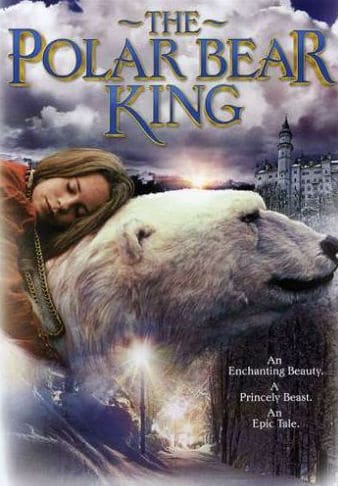 When kids from the 1990’s talk about movies from their childhoods, there is one it seems we all watched, but no one can remember the name of. There’s a puppet polar bear, a crazy witch, an invisible queen, magic shoes, and it’s based on “East o’ the Sun and West o’ the Moon,” but that’s where our collective memories usually run out, leaving us to wonder what the name of the movie is.

Originally released in 1991 in Germany as Der Eisbarkonig and in Norway as Kvitebjorn Kong Valemon, the story was filmed in Norway and looks gorgeous. It’s listed as being based on “Norwegian Folklore,” specifically on a fairy tale I had never heard of, “White-Bear-King-Valemon.”

This story is very closely tied to both “East o’ the Sun and West o’ the Moon” and “Beauty and the Beast,” with splashes of “Cinderella” thrown in for good measure. If you haven’t read the original, it’s fantastic. I’d recommend tracking it down. It won’t take long to read, and reading it shows that The Polar Bear King is a very thoughtful adaptation.

Basically, the story follows the Princess and King Valemon. She is the youngest of the three daughters of the King of the Winterland, where it is always winter. Her sisters are just the right mix of awful and loving, which makes them less cardboard than older sisters in fairytales can easily become. The Princess is her father’s favorite, but she is always dreaming of summer and the lands to the South. Her dreams include a handsome prince and a lush garden.

RELATED YA Book Review: East – A Journey to Find Love and Destiny

Meanwhile, in the South, young King Valemon is put under a spell when he refuses to marry a Witch who wants to rule his kingdom. She turns him into a polar bear though he will turn into a human every night at midnight. If he can find a bride within seven years who will be content to marry a polar bear, and if he can go the whole seven years with no one seeing his face, he will be free. If anyone does see his face before those seven years were up, he will belong to the Witch forever.

Determined to find a bride, Valemon heads North, where he meets the Princess. When she meets Valemon, she knows she has found the prince from her dreams. Believing his story, she agrees to go with him as his Queen. Her family tries to stop her, but they are unsuccessful and the Princess is determined to go. The two head South and get married. Things are good for a time for our couple, but the curse is not broken yet.

The Witch is not used to losing, and she will stop at nothing to win both her King and the kingdom. And, of course, we have the usual story, seen in both “Cupid and Psyche” and “East O’ the Sun and West O’ the Moon.” The Princess has one rule to follow. Just one. She is not to look at her husband’s face. When she breaks this rule (with only a few months left before the spell is broken), Valemon has to go to the Witch and he is less than thrilled.

The princess is determined to save her love. With the help of a magical mother-in-law and her own missing children, she sets out on a quest to save her love and land from evil. Will she succeed? I don’t want to spoil anything, but it is a fairytale…

The love story, although they met in a dream and she agreed to marry him because she was dreaming of the south, was still pretty solid.  Regardless of the rushed feeling, I got the impression that they really loved each other, and she did risk a lot to save him. Without a connection between the Princess and Valemon, the story kind of falls apart, and I don’t feel like that happened here.

Also, the villain is fantastic. The witch has the best and most ridiculous costumes and manages to be menacing but also funny at the same time. I was terrified of her as a kid. She reminds me a lot of Cruella de Ville, actually. She’s a ton of fun, and I always loved how the Princess and Valemon were able to trick her (and all her friends) in the end.

As a fairy tale adaptation, it’s wonderful and works very well. Although the puppet looks less realistic today, it reminds me of the BBC Narnia movies of the late 1980’s, and there are worse things to look like. The polar bear puppet was made by the Jim Henson Studio, and it shows in the craftsmanship and its motions. At times, it looks cheesy, but for the time period, the technology used looks to be fairly solid.

Really, the only thing that I really want to criticize about The Polar Bear King is very nit-picky.  I think some of the original language and meaning got lost in translation to the English. I can never tell if it’s been dubbed or not (I just get caught up in the story), but sometimes there are weird breaks in a sentence, pauses where it doesn’t really make sense, that sort of thing. It just feels a little jarring at times.

Besides that, the music is fun, and exactly what I expect out of a live-action fairy tale; it sets the mood and the pace for the events. I don’t recognize either of the names behind the score (Geir Bohren and Bent Aserud), but both have impressively long resumes.

I also love the costuming, the citizens of both Winterland and the Summer Lands are dressed appropriately for the weather in their respective climates, and I appreciated that the different cultures also seemed to have different hairstyles. It gave the two kingdoms additional differences, not just the weather.

Of course, it is a fairly faithful adaptation of a fairytale, so view with caution; it can be a little scary (the Witch’s master makes a few appearances, and there are some exploding characters). There are also some more gory moments that might be too much for younger kids, (though a lot of us watched it as kids and we all turned out okay).

The fact that the Princess doesn’t actually get a name never bothered me, since she didn’t have one in the original story either (and to give her a name would have felt shoehorned in). She’s still a great character who is brave and resourceful, and unnamed heroines seem to be pretty common in fairy tales.

Overall, The Polar Bear King is a really fun fairytale adaptation of a lesser-known Norwegian fairytale, with ties to other, more well-known tales. It’s not a perfect film and it does have some weird story choices, but it is fun (and I wonder which of the story problems were related to translation, or staying true to the source material). If you think you may have seen it but can’t remember for sure, or haven’t seen it at all, it’s well worth the watch. If you like fairytale adaptations, you will probably enjoy The Polar Bear King.

Have you seen The Polar Bear King? What are your thoughts on this fairy tale classic? Let me know in the comments!

Our romance-themed entertainment site is on a mission to help you find the best period dramas, romance movies, TV shows, and books. Other topics include Jane Austen, Classic Hollywood, TV Couples, Fairy Tales, Romantic Living, Romanticism, and more. We’re damsels not in distress fighting for the all-new optimistic Romantic Revolution. Join us and subscribe. For more information, see our About, Old-Fashioned Romance 101, Modern Romanticism 101, and Romantic Living 101.
Pin this article to read later! And make sure to follow us on Pinterest.
By Bailey Cavender on February 26th, 2016