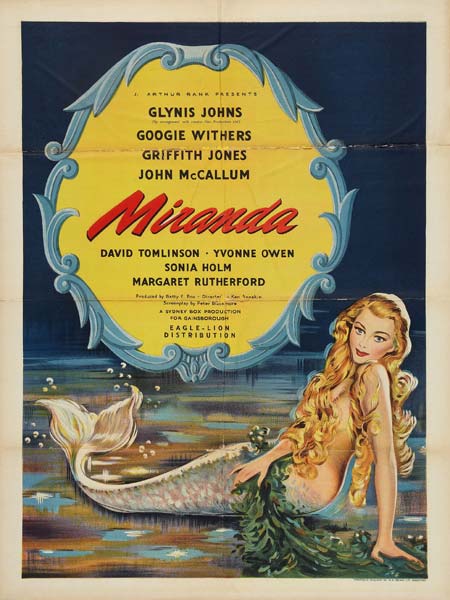 Miranda is a 1948 British comedy about the boy crazy, flirty mermaid Miranda played by the gorgeous Glynis Johns (Mrs. Banks in Mary Poppins). When Dr. Paul Martin, a married man mind you, goes on a fishing trip, he catches (or rather gets caught himself) a mermaid. Excited to have found a man (for mermen are rather boring after all), Miranda takes him hostage in her cave. That is, until he agrees to take her to London with him. 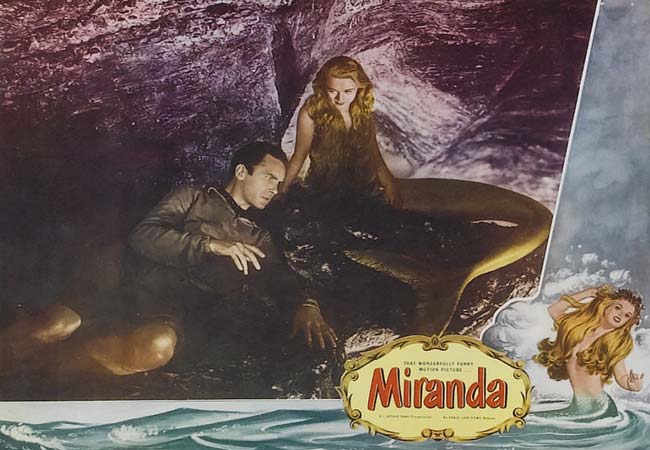 Since she’s a mermaid, the two create a façade that she’s an invalid that can’t walk with Paul as her Doctor. Paul takes her back home to his wife, but considering how beautiful and overly flirtatious she is, this causes all the women to become suspicious, particularly Paul’s wife Clare. When two other unavailable men (though not married like Paul) begin to fall for Miranda, chaos and hilarity ensues. The men just love to carry Miranda around, and she loves for them to help her. And as Clare becomes closer and closer to the truth, you’re left wondering just exactly what Miranda is up to. Is she looking for a human husband? Is she just crazy about men? The film definitely answers this question by the end.

Aside from the entertaining plot and charming cast of characters, you can really see how it influenced later mermaid films like Splash and The Little Mermaid. While decidedly less rape like than Splash (seriously go re-watch), the similarities are intriguing. Then there is Miranda’s cave of human trinkets that really paved the way for Ariel’s own secret cave full of human “treasures.” 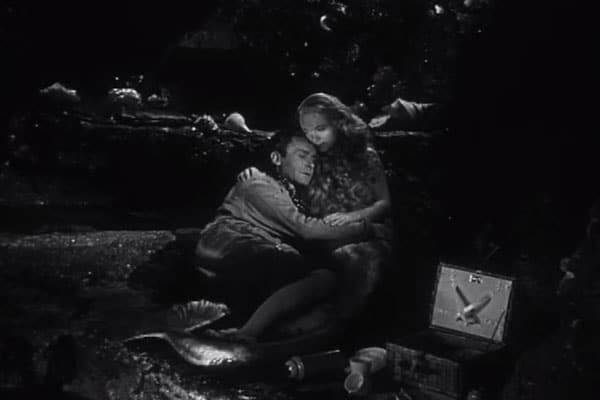 While Miranda would influence later mermaid films, Miranda itself was influenced by folklore. Whether through the sirens of Greek mythology luring men away with their voices (Miranda can sing like a pro), or through the mermaid legend of Cornwall (where Miranda comes from) in which it is said a mermaid fell in love with a man (See more here: http://www.cornwalls.co.uk/myths-legends/mermaids.htm), there’s a lot to appreciate for those of us interested in the mermaid myth.

Overall, if you love mermaids or classic British comedies, then you will likely enjoy Miranda. Not only is it laugh out loud funny at times thanks to Miranda’s flirty antics, but also an enchanting film that will hold you captive with its interesting story. It should be noted, however, that while Miranda seems like it would be a romantic comedy, and there are definite romantic ingredients involved, this is not really a love story, but I can’t really say more than that…You can catch Miranda on both Netflix and Amazon Prime. Also keep an eye out for the sequel, Mad About Men.

Our romance-themed entertainment site is on a mission to help you find the best period dramas, romance movies, TV shows, and books. Other topics include Jane Austen, Classic Hollywood, TV Couples, Fairy Tales, Romantic Living, Romanticism, and more. We’re damsels not in distress fighting for the all-new optimistic Romantic Revolution. Join us and subscribe. For more information, see our About, Old-Fashioned Romance 101, Modern Romanticism 101, and Romantic Living 101.
Pin this article to read later! And make sure to follow us on Pinterest.
By Autumn Topping on July 2nd, 2015