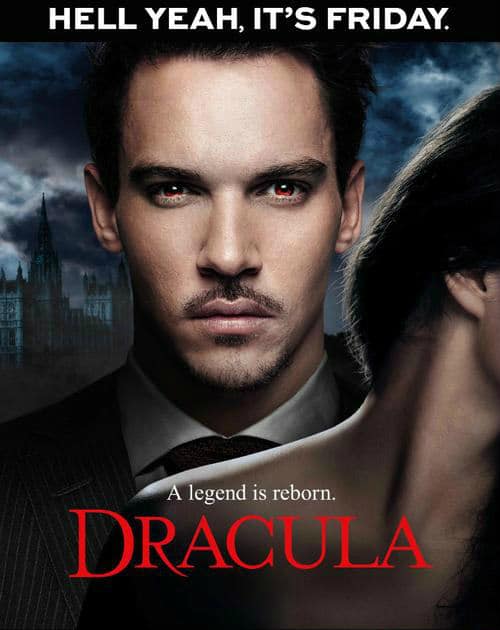 Premiering last Friday night, NBC’s Dracula is a new re-imagining of Bram Stoker’s classic tale, this time with the iconic vampire awakening in the 19th century to help take down a secret and evil organization “The Order.” While this order is trying to control the populace and hunt vampires, Dracula, or Alexander Grayson as he’s called, stumbles upon Mina a medical student who looks eerily like his deceased wife killed by “The Order” during the Dark Ages. This Dracula is less Stoker, more Coppola and even more BBC costume drama (if they were to, you know, make a miniseries about a vampire in Victorian London). Dracula is romantic, clever and stylish with a slower pace befitting the Victorian Era proving the writers and director understand period drama, something typically not found on American television.

Out of all the pilots I’ve seen this new fall TV season, Dracula is by far my favorite. To be frank, I’ve been more than a little underwhelmed by the new shows, so I was pleased Dracula was actually good. While many may feel weighed down by an overabundance of vampires in film, television, and literature in the recent past, I say…why not have at least one more, particularly when it’s done well? There is a never-ending supply of cop procedurals, medical soaps, and teen shows, so why disparage a new supernatural ADULT genre series? There aren’t actually that many good ones, so when one appears I tend to get more than a little excited!

The design of this series is breathtaking. The sets, the costumes, the atmosphere…all authentic yet stylized. You feel like you’re experiencing Victorian London with a supernatural twist. Usually on American shows, fantasy and period come across as cheesy and inauthentic. But with some overseas help mixed with new talent (creator Cole Haddon) and an obviously talented cast and crew, this show excels in recreating the time.

Besides the look and atmosphere of the series, the show was cast to perfection. There wasn’t a misstep in the selection. Jonathan Rhys Meyers is the perfect choice for Dracula known all too well for playing villainous (but somehow likable) roles. He excels at playing the brooding bad boy who can kill you at any moment. He’s seductive yet frightening; romantic yet dangerous. Certainly, his charisma will draw many viewers into his performance and keep them glued to the television screen. Having a deep affection for Byronic Heroes, I always welcome a new one.

Then there’s Thomas Kretschmann as Van Helsing. You’ve probably seen him around in tons of movies on the big screen. I remember him as the charismatic captain in Peter Jackson’s King Kong for instance. What’s great about NBC’s Dracula is that there are no weak links in the cast and all the stops (and perhaps budget) was put out for the real deal. With a believable accent and a masculine, intellectual approach to the role I can’t wait to see more of him on screen. There’s a twist at the end of the pilot connected to Helsing you’ll have to watch to find out, but if you aren’t hooked throughout the episode, make sure to watch the last 5 minutes. Your mind just may change. After all, pilots are really more blueprints to a series anyway. It’s not usually till a few episodes in (and sometimes a whole season in) that shows truly find their voice. This one seemed to find it by the end of the episode.

On top of Dracula and Van Helsing, there’s the villainous Browning played by Lark Rise to Candleford star Ben Miles who heads The Order. At this point, his character is a bit one-note, but I gather a few episodes in, and his character will begin to make more sense.

The female characters were brilliantly cast. First, there’s Jessica De Gouw, scene stealer from last season of Arrow as Mina and love interest to Dracula. Mina has been modernly updated to be a medical student, very fitting to her character. Plus, there’s a nice setup for her to work with “Professor” Van Helsing, which in turn I’m sure will lead her right back to Dracula. Her best friend is Lucy, played by Katie McGrath of Merlin fame. It’s refreshing to see her in a new role, albeit with blonde hair, and I am excited to see how her character will flesh out. Last, there’s Lady Jayne played by Victoria Smurfit. She’s the only female member of The Order (that we know of) who also happens to be a vampire hunter AND has a seeming attraction to Dracula. As it stands, all three female characters seem promising.

As an extra tidbit, for all the period film aficionados out there, if you watch closely you’ll notice Lord Laurent is played by the swoon-worthy Anthony Howell from Wives and Daughters (Roger Hamley). I know he will be in future episodes, so I’m hoping he’ll have a larger role! So basically in the pilot we’ve got Jonathan Rhys Myers of too many movies and shows to count, the charismatic Thomas Kretschmann as Van Helsing, Jessica De Gouw, Katie McGrath, Ben Miles and even smaller roles filled by familiar faces of BBC period drama including Downton Abbey, and more. The show is not off to a bad start especially when they have such a memorable cast, to begin with.

The writing was also top notch in the pilot. The dialogue was more natural and less clunky than most shows that attempt period. It’s very difficult to capture dialogue suited to another time, but Dracula does it particularly well. There were a few cheesy lines here and there, but for the most part, I was pleased. Usually, writers will try to modernize too much to appease to a modern audience which then makes the dialogue feel stilted and unnatural because it doesn’t match the setting and atmosphere. As the show continues, I can imagine the dialogue will only continue to get better.

Another part of the pilot I really loved was the whole direction in and of itself. By creating an “Order” that hunts vampires by the aristocratic elite, there’s more mystery and intrigue behind what is usually a straightforward story. As a TV Series, the story of Dracula will have much more time to be explored. So far, the writers have successfully begun to build a promising mythology, hopefully continuing what could have been fantastic in the season two of Moonlight that never happened with vampire cullings and a modern day French Revolution in Los Angeles. This time, this type of story will be in Victorian London.

I’m not completely sold on the idea of “who” belongs to the Order. It’s a little bit stereotypical to have the rich be behind the corrupt order. I’d like to see a little more variety which in turn could create better twists in the future. There’s a possible theme here of rationalism and science vs. religious conservatism and the changing times. Certainly no doubt if done well, it could accurately capture a time that was changing at the turn of the century which would be fantastic. But it could also be done in a way that feels too modern (it’s okay to modernize but don’t go overboard) and too Hollywood. This could turn off some viewers. I don’t really see much need to politicize Dracula. But that’s just me. Tell a good story and let the rest fall into place. No one likes to be preached at, especially by a blood-sucking vampire (True Blood season 6 anyone when the vampires are put into “camps?”)

Overall, I truly enjoyed the series and believe it to be the best of the fall pilot season. Some may find it a little bit slow compared to other fast-paced genre shows on TV, but I think this supernatural series is more akin to a period drama with fangs than an actual action genre series, even if Dracula does have a lot of blood. If you like BBC miniseries, good characters with a memorable cast, strong writing, an intriguing mythology and quite a bit of romance, then this show may be for you. I know I’ll be tuning in next week. It feels nice to watch another vampire show again on Friday night. Nostalgically, I want to ask the question once again (Moonlight fans will understand): “Is it Friday yet?”

What did you think of NBC’s Dracula? Will you be tuning in this Friday? Discuss in the comments below…

Check out our other Television Reviews!

Check out our classic romantic moment of the week between Mick and Beth.

Take a look at our list of the Top 35 Vampires in Film and Television.

Don’t miss the Top 20 Vampire TV Shows to Sink Your Teeth Into.

Our romance-themed entertainment site is on a mission to help you find the best period dramas, romance movies, TV shows, and books. Other topics include Jane Austen, Classic Hollywood, TV Couples, Fairy Tales, Romantic Living, Romanticism, and more. We’re damsels not in distress fighting for the all-new optimistic Romantic Revolution. Join us and subscribe. For more information, see our About, Old-Fashioned Romance 101, Modern Romanticism 101, and Romantic Living 101.
Pin this article to read later! And make sure to follow us on Pinterest.
By Amber Topping on October 27th, 2013