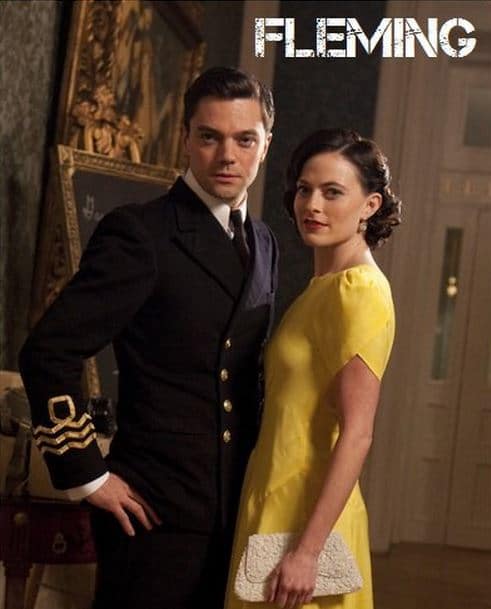 The Show: Fleming: The Man Who Would Be Bond

“There’s no questioning the iconic status of the man they call 007, but before his thrilling adventures hit the page or screen, they were experienced first-hand by author-to-be, Ian Fleming. Stylish and explosive – Fleming: The Man Who Would Be Bond tells the fascinating story of the man whose own life and escapades were the inspiration for one of the most iconic figures in modern literature – James Bond. The new original four-part drama stars Dominic Cooper (Captain America: The Winter Soldier) as Fleming, a charming and sophisticated maverick, whose pleasure-seeking life was turned around by WWII and led to the creation of the greatest spy the world has ever known.”

While admittedly I have never been that into James Bond flicks (Timothy Dalton is my favorite because hello Mr. Rochester…), a biopic mini-series based on the writer sounded right up my alley: period drama, great British actors, a little romance, some spy drama, etc. I wasn’t wrong. Only one episode in so far (episode 2 airs tonight on BBC America), and I generally already like the direction. The series is exciting, well-acted and written, engrossing, and the directing/cinematography is stunning.

Even though I am not a huge Bond expert, the small nods to the books and films were a nice touch, the opening sequence to the series very Bond esque with the boat and a little love making. Once they reveal what book Fleming is writing (the first James Bond novel), the series takes us back thirteen years just when WWII was about to begin. This works effectively to emphasize the need to pay attention to what Fleming experienced during the War that would later influence some of the most popular books of all time. Certainly, dramatic license was given and much of the “truth” has been romanticized and embellished for television but that’s okay because it makes for good entertainment (at least in my book).

Still, because this is “based” on a true story, the writers can only take the film so far. We know who he marries, we know he survives the war, and we know the ultimate outcome of his life as a novelist. But sometimes watching the journey to a known ending can be just as fascinating as one that remains uncertain. Right off the bat, Fleming is revealed as not your typical hero but rather as a cad. He fancies himself a ladies’ man which works well with Cooper in the leading role because he is rather dashing (the real Fleming wasn’t quite so attractive).

The black sheep of his rich family (his mother clearly knows Winston Churchill and his perfect, heroic and famous brother Peter always shines brighter), Fleming just doesn’t know his place in the world. With a fantastic imagination, he can’t cut it in the typical life of being a stockbroker. Plus, he’s just not that reliable…That is, until he gets offered a job (thanks to his mother contacting “Winston”) in Naval Intelligence where his fanciful ideas and imagination can make a difference during the War. I am very intrigued to see where this direction is headed. Based on his biography, the writers have a lot to play with here. Despite the embellishments, Fleming did lead quite an interesting life.

In the midst of the War and work, the series also makes time for some romance as Fleming clearly starts falling for the beautiful and captivating baroness, Ann O’Neill, played by the always charismatic Lara Pulver (Sherlock). While certainly interesting to watch, I can’t say that I am rooting for these two to come together (even though they eventually marry) because not only is Ann already married but she is also having an affair with another man. Still, this being a true story, the writing and directing really knows how to sell their story and do so in style. The shot of them kissing in slow motion while the bomb hits, is just spectacular.

Another fascinating romance in the series is between Fleming and Muriel Wright. While certainly Fleming is just using her (they first met when she asked for his brother’s autograph), the actress Annabelle Wallis portrays the vulnerability of the character seamlessly as she can’t help but fall for a man who clearly doesn’t love her in return.

Aside from the romance department, the acting from all of the characters is fantastic. There are no weak links, no moments in which the deliveries of the lines throw me out of the series. BUT, one particular standout that I MUST mention is the simply wonderful Second Officer Monday played by Anna Chancellor (The Hour). Her dry wit and subtle emotions written on the face sell this performance with ease and I am eagerly awaiting the next episode to see where the series goes with her (and I have to admit that I kind of love that I don’t know her ending).

Overall, this is another great BBC miniseries worth tuning in to. If you hadn’t heard of it before now, catch up (it is free online if you go to BBC America’s website) and tune in live! There are just never enough good period dramas and this one is quite good, even if like me you’re just not that into James Bond.

Content Note: This is rated TV-MA and has some sexual innuendo as well as a couple of sex scenes. There is brief bad language but it is not pervasive.

Our romance-themed entertainment site is on a mission to help you find the best period dramas, romance movies, TV shows, and books. Other topics include Jane Austen, Classic Hollywood, TV Couples, Fairy Tales, Romantic Living, Romanticism, and more. We’re damsels not in distress fighting for the all-new optimistic Romantic Revolution. Join us and subscribe. For more information, see our About, Old-Fashioned Romance 101, Modern Romanticism 101, and Romantic Living 101.
Pin this article to read later! And make sure to follow us on Pinterest.
By Autumn Topping on February 5th, 2014