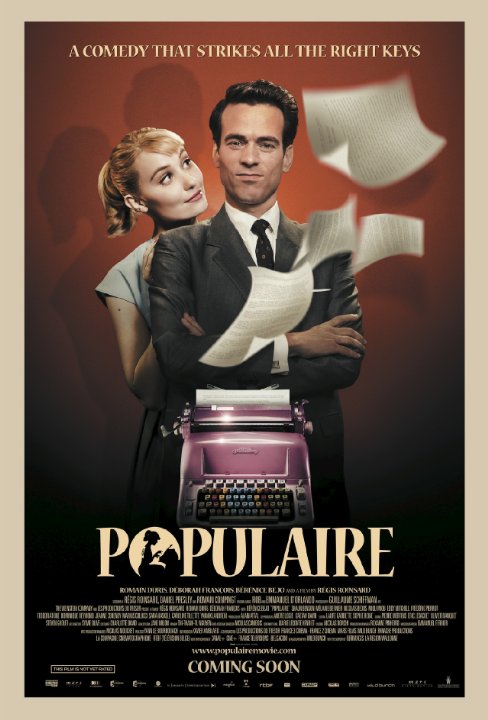 “Spring, 1958. 21-year-old Rose Pamphyle lives with her grouchy widower father who runs the village store. Engaged to the son of the local mechanic, she seems destined for the quiet, drudgery-filled life of a housewife. But that’s not the life Rose longs for. When she travels to Lisieux in Normandy, where charismatic insurance agency boss Louis Echard is advertising for a secretary, the ensuing interview is a disaster. But Rose reveals a special gift – she can type at extraordinary speed. Unwittingly, the young woman awakens the dormant sports fan in Louis. If she wants the job she’ll have to compete in a speed typing competition. Whatever sacrifices Rose must make to reach the top, Louis declares himself her trainer. He’ll turn her into the fastest girl not only in the country, but in the world! But a love of sport doesn’t always mix well with love itself …”

…this film brings all the right ingredients together for a surefire film that entertains and just simply lifts the spirits.

If the summary wasn’t enough to convince you to tune into this French imported film of awesomeness, let me convince you why Populaire is a must see! Part Doris Day romantic comedies, part Mad Men, and part just plain good drama, this film brings all the right ingredients together for a surefire film that entertains and just simply lifts the spirits. While some of you may be wary of the subtitles, I encourage you to overlook them and make an exception; be brave and venture into the unknown. This is no snore fest you see at the loftiest theater in town. Instead, Populaire is funny, romantic, and never (not once) has a dull moment. For those who love foreign films (including the adorable Amelie), I don’t see how you could go wrong here.

Right off the bat, the film gets right into the action, the director’s style also endearing from the opening scene and old-fashioned credits. Rose doesn’t take long to leave her small village and father to work for the handsome Echard as a secretary. But he certainly didn’t hire her for her stellar work (her clumsiness and awkward antics just make Rose all the more charming), however, but because he sees something in this naïve, untrained girl that can type like a whiz. Before too long, Rose moves into Echard’s house so he can train her to be the fastest typist in the world. Emotions start to fly but can Rose open up the closed off Louis Echard as more than just a coach?

Confession time: I started rooting for a happy ending for these two from their first scene. Their chemistry sizzles without a word and when they do speak, it was even better (I love when Rose loses her temper)! Throughout, I couldn’t help but find myself smiling and simply enjoying the love story and tension between Rose and Echard. How wonderful to watch a film that reminded me of the movie magic of the past. The cinematography was stunning and also reminiscent of old Hollywood classics from the late 1950s and 1960s. The feeling of the movie invoked the classics and that to me was extremely welcome in a modern world of darker, grittier films or even the huge blockbusters.

Besides the romance, the characterization stands out strongly as well. After the credits rolled, I left the film as if I knew Louis and Rose as real people. I understand who they are and why they are the way that they are. They have flaws that make them easy to identify with, while at the same time qualities that I also can’t help but admire. I root for Rose to prove her father wrong and to prove something to herself in the process: that she is indeed more than just this weird girl with only one gift in life, typing. Likewise, I long for Louis to overcome his own demons as Rose competes in the national and then world typing competitions. Mainly, I became invested in these two and I think it would be pretty hard not to for almost anyone with heart. What finally sells these two as characters, outside of the brilliant writing, were the inspired performances from Déborah François and Romain Duris. I would definitely want to see them in more, particularly François because of her rare, classic like quality as an actress. Not once did I ever not believe she was Rose Pamphyle.

As homage to the Doris Day romantic comedy of old, Populaire just worked on all levels. The romance was truly romantic, the lines well written with humor and drama, the acting brilliant, and the filmmaking from the period costumes to the sets were gorgeous. I am thrilled that I was able to discover this lesser known movie through Netflix streaming. If you are bored one day, I suggest you also give Populaire a chance. If I had seen it last year, there is no doubt it would have made my top ten films of 2013. Overall, a great feel good movie that will force you to smile and maybe even stand up and cheer.

NOTE: This movie is Rated R but if you prefer cleaner period dramas, it is basically PG with one scene of sexuality that is easily skipped over.

If you love classic romance, check out my Top 50 Classic Romances in Film that Will Make You Swoon

Our romance-themed entertainment site is on a mission to help you find the best period dramas, romance movies, TV shows, and books. Other topics include Jane Austen, Classic Hollywood, TV Couples, Fairy Tales, Romantic Living, Romanticism, and more. We’re damsels not in distress fighting for the all-new optimistic Romantic Revolution. Join us and subscribe. For more information, see our About, Old-Fashioned Romance 101, Modern Romanticism 101, and Romantic Living 101.
Pin this article to read later! And make sure to follow us on Pinterest.
By Autumn Topping on January 23rd, 2014