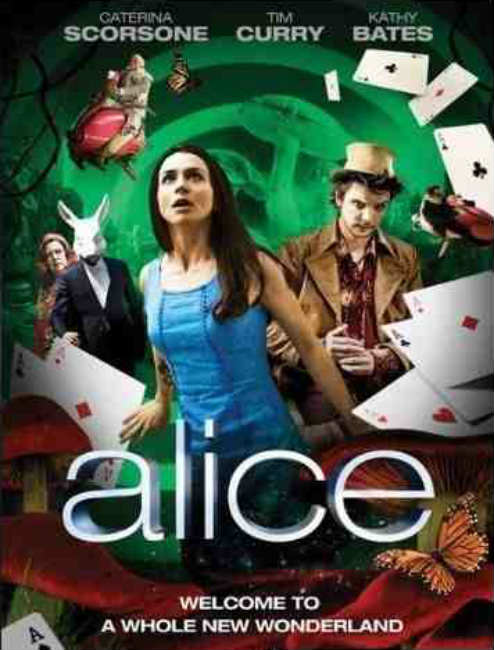 Alice is the follow-up to Tin Man, this time reimagining aspects of Alice in Wonderland and its sequel Alice Through the Looking Glass.  This is, in my opinion, the more competent of the two.  In this version, wonderland is ruled by the red queen who keeps her people in line by harvesting emotions from oysters (kidnapped humans) and selling them to her subjects as mood altering teas.  It is a sci-fi adaptation set 150 years after the events of the books.  Alice is a gritty surreal modern update to Lewis Carroll’s masterpiece.

Martial Art Instructor Alice is searching for her father who disappeared ten years previously. One night she sees her new boyfriend being pulled away by mysterious men. She follows just in time to see them disappear through a large strange-looking mirror in an abandoned factory. She enters the mirror after them and wakes up in a strange and surreal world where nothing is exactly as it appears.

The visuals are creative and quite well done.  Using numerous indoor and outdoor locations combined with several different types of CGI Alice brings its unique version of wonderland fully to life.  I was especially impressed with the library as resistance base and the Hospital of Dreams. The CGI generally meshes quite well the real locations with the bizarre and vertigo effects, creating a cool effect.  The animation used to create the jabberwocky was also creative and believable.  The character design and costumes were interesting though some were better than others. The mini-series improves upon this atmosphere with the use of a curious, and at times ominous, discordant soundtrack that manages to not quite sound like anything I have heard before. The writing is good, the plot develops cleverly and the action is involving.

Alice also includes some memorable performances. Caterina Scorsone is refreshingly active as Alice with a great deal of agency and personality. Matt Frewer is eccentric and wonderfully unusual as the White Knight.  But most watchable is Andrew Lee Potts of Primeval fame as the enigmatic and adorkable Hatter. Hatter is by far the most entertaining aspect of the mini-series infusing it with a unique humour and charm.The mini-series also has an impressive and talented supporting cast that brings an extra depth to it.  Kathy Bates, Tim Curry, Harry Dean Stanton and Colm Meaney perform their roles with gravitas and flair, bringing their own unique styles to the piece.

As an adaptation, there are numerous little shout outs to the original text such as a slightly meta use of the famous ‘drink me’ bottle and Alice dreaming of her cat Dinah grinning like the Cheshire.  Having been quite familiar with the books, these nods to the audience were very much appreciated.  Although if this mini-series has one flaw, it’s that given the subject matter it could stand to be weirder.  Some of the strongest sections of the mini-series occur when the writers have simply let their imaginations run away with them.

One of the best aspects of the film, however, was the romance. There is a sweet love story that develops between Hatter and Alice after Jack is revealed to not quite be who Alice thought he was.

In all, Alice is an imaginative and fun mini-series which takes a new look at wonderland, creating an exciting adventure which will appeal to fans and newcomers alike. I am not embarrassed to say that the ending left me grinning.

Our romance-themed entertainment site is on a mission to help you find the best period dramas, romance movies, TV shows, and books. Other topics include Jane Austen, Classic Hollywood, TV Couples, Fairy Tales, Romantic Living, Romanticism, and more. We’re damsels not in distress fighting for the all-new optimistic Romantic Revolution. Join us and subscribe. For more information, see our About, Old-Fashioned Romance 101, Modern Romanticism 101, and Romantic Living 101.
Pin this article to read later! And make sure to follow us on Pinterest.
By Elinor Cackett on September 14th, 2015