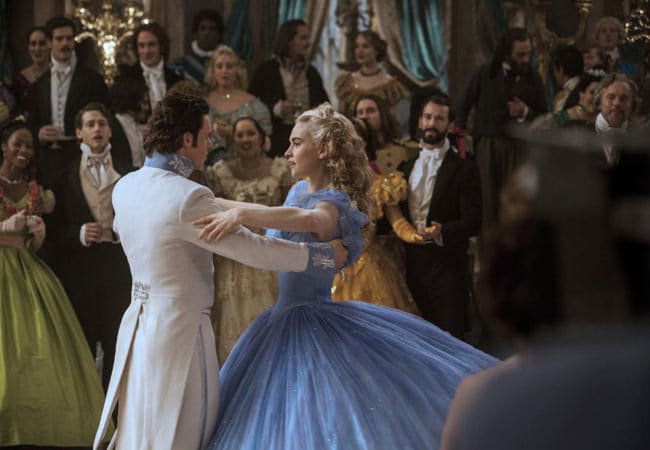 THE MOMENT: The Prince and Cinderella fall in love at the ball.

The latest live action Cinderella finally arrived in theaters this week and the film was even more romantic than I could have imagined.  The chemistry between Cinderella and Prince Kit lit up the big screen as if by magic.

In the past, one of the biggest setbacks of this enjoyable fairy tale has always been the development of their relationship because it verges on being completely shallow. Rightly so, the screenwriter and director altered the love story (one clearly based on the Disney cartoon) and developed it into something greater, creating a love story the audience can root for.

The chemistry between Cinderella and Prince Kit lit up the big screen as if by magic.

Cinderella has several wonderful romantic moments to choose from (their first swoon worthy meeting and the perfectly played out ending), but I decided to focus on Cinderella’s invitation to the ball and actual ball experience because it sets up the rest of the movie.

Everything about the ball scene felt like a romantic dream put to screen. The visual effects, costumes (especially Cinderella’s unbelievably gorgeous blue gown), and production design created the most amazing spectacle. Like the Prince, I know I couldn’t keep my eyes off Cinderella (the film that is). 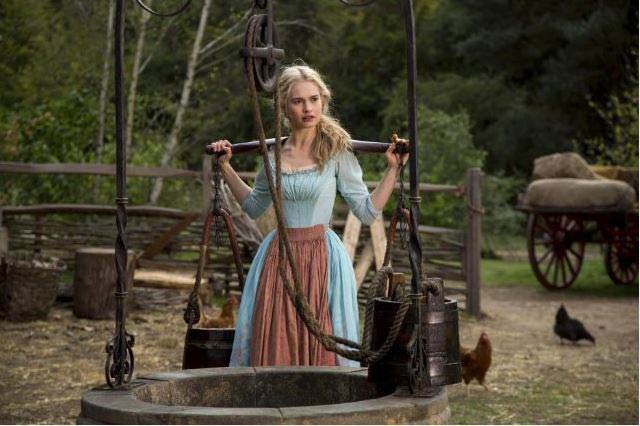 Prior to the ball, poor Ella (now Cinderella thanks to her unkind stepsisters) has very little in life to look forward to. After her father’s death, she is treated like a servant by her step family (Cate Blanchett shines in her cruelty), and has only the mice to talk to. In spite of all this, she treats her step family with kindness, the movie offering a wonderful strength of empathy and goodness to their female heroine. It is in this goodness that the Prince falls for our heroine.

After being humiliated by her ‘family,’ Cinderella takes her horse to the woods. There, she meets a beautiful stag frightened by a hunting party. She rides to save the stag and in the process meets the prince who she doesn’t recognize. The prince, enjoying his anonymity, introduces himself as just Kit, an apprentice. Without knowing his royal background, Cinderella asks him to let the stag go free, for just because something is done, doesn’t mean it’s what should be done. He agrees, clearly falling for her instantaneously.

What I loved about their introduction is that Kit doesn’t care who she is or that she’s just some country girl. He likes her goodness; he likes her for who she truly is. And unlike Ever After, he never looks down at her status (though Ever After has the deeper development overall). He only sees the woman he wants to marry, despite all the pressure to marry a princess. It is in Kit’s own goodness that he decides to invite every woman (no matter how common) to the ball; all because he would do anything to find this strange and beautiful girl, no matter her rank in life. I loved this added development because it gives a reason why the Prince sent out an invitation to everybody. It also gives deeper characterization to him as more than just a handsome prince that falls for Cinderella at first sight at the ball.

Despite the prince’s invitation, and even though every maiden in the kingdom receives this invitation, Cinderella isn’t allowed to go. Wearing her mother’s pink gown, her stepmother tears it apart. Finally, Ella can take it no more and cries hysterically at her lot in life.

In the midst of her tears, an old woman interrupts, asking for a bit of milk. Revealing inner strength and compassion, Cinderella doesn’t hesitate to help her. After this ‘test’ of kindness, the old woman reveals she is actually her fairy godmother. At first, Cinderella doesn’t believe (though her mother did), but when the fairy godmother transforms into a beautiful woman, her magic can’t be denied. 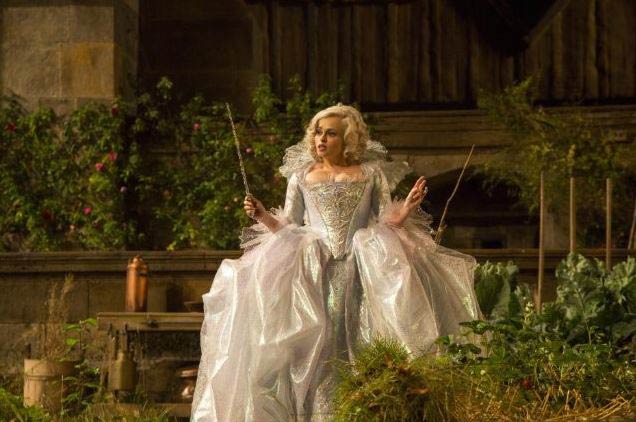 Returning the kindness, her fairy godmother helps Cinderella go the ball: mice for horses, a pumpkin for a carriage, lizards for footmen, etc. Then there is her dress. With magic, her mother’s gown becomes the most beautiful dress in the history of dresses. Just as Cinderella hops into the carriage, her fairy godmother sees her dismal shoes and gives Cinderella the iconic glass slippers (Kenneth Branagh doing for the glass slippers what the 1939 Wizard of Oz did for the ruby red slippers).

She goes to the ball; the prince waiting and looking for the girl he met in the woods. Arriving late, Cinderella makes her way to the entrance and enters without an introduction. No one knows her name (her stepfamily spelled to not ‘see’ her true face), but Kit recognizes her. She walks in with beauty and grace, and an aura of goodness to add to it. Anyone can see why the Prince is so taken with the enchanted girl.

The two dance, once again like a dream, Kit noting how everyone was looking at her. But they do more than dance, they also talk as if equals and begin to get to know each other. The believability in this ‘rushed’ romance is surprisingly likable and authentic.

Kit even takes her to his secret garden where he pushes her on a swing in a wonderfully old-fashioned moment. 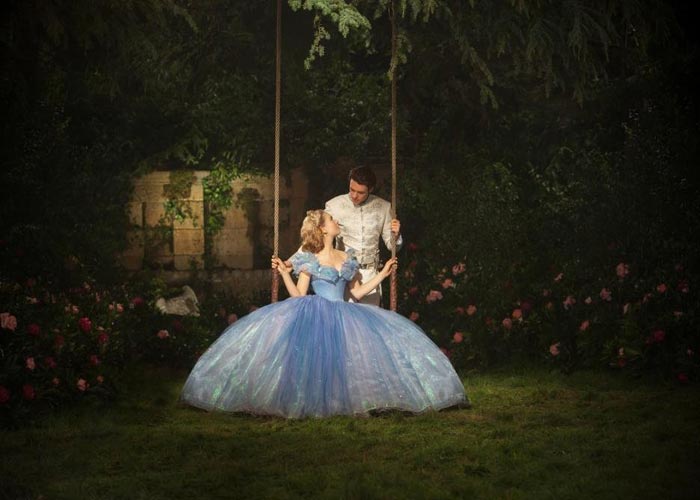 Foreshadowing the ending we all know, Cinderella’s shoe falls off and the Prince sweetly puts it back on.

But their time is cut short. Midnight is approaching. With a quick goodbye -Prince Kit still not knowing her name- Cinderella runs away from him and then the ball. He chases after her, but she’s too fast. Going too fast, she loses one of her glass slippers, setting up the ending of this classic tale.

The dream is over and reality must soon set in, but it is in this reality that Cinderella can find her happily ever after. As we all know the story, I believe we all know what happens next, an ending just as romantic as the ball, especially since this time the Prince loves Cinderella for who she really is. Sometimes, dreams do come true after all, especially when there’s magic involved.

What did you think of Cinderella? Did you like the love story between Cinderella and Prince Kit? Sound off in the comments…

Our romance-themed entertainment site is on a mission to help you find the best period dramas, romance movies, TV shows, and books. Other topics include Jane Austen, Classic Hollywood, TV Couples, Fairy Tales, Romantic Living, Romanticism, and more. We’re damsels not in distress fighting for the all-new optimistic Romantic Revolution. Join us and subscribe. For more information, see our About, Old-Fashioned Romance 101, Modern Romanticism 101, and Romantic Living 101.
Pin this article to read later! And make sure to follow us on Pinterest.
By Autumn Topping on March 14th, 2015