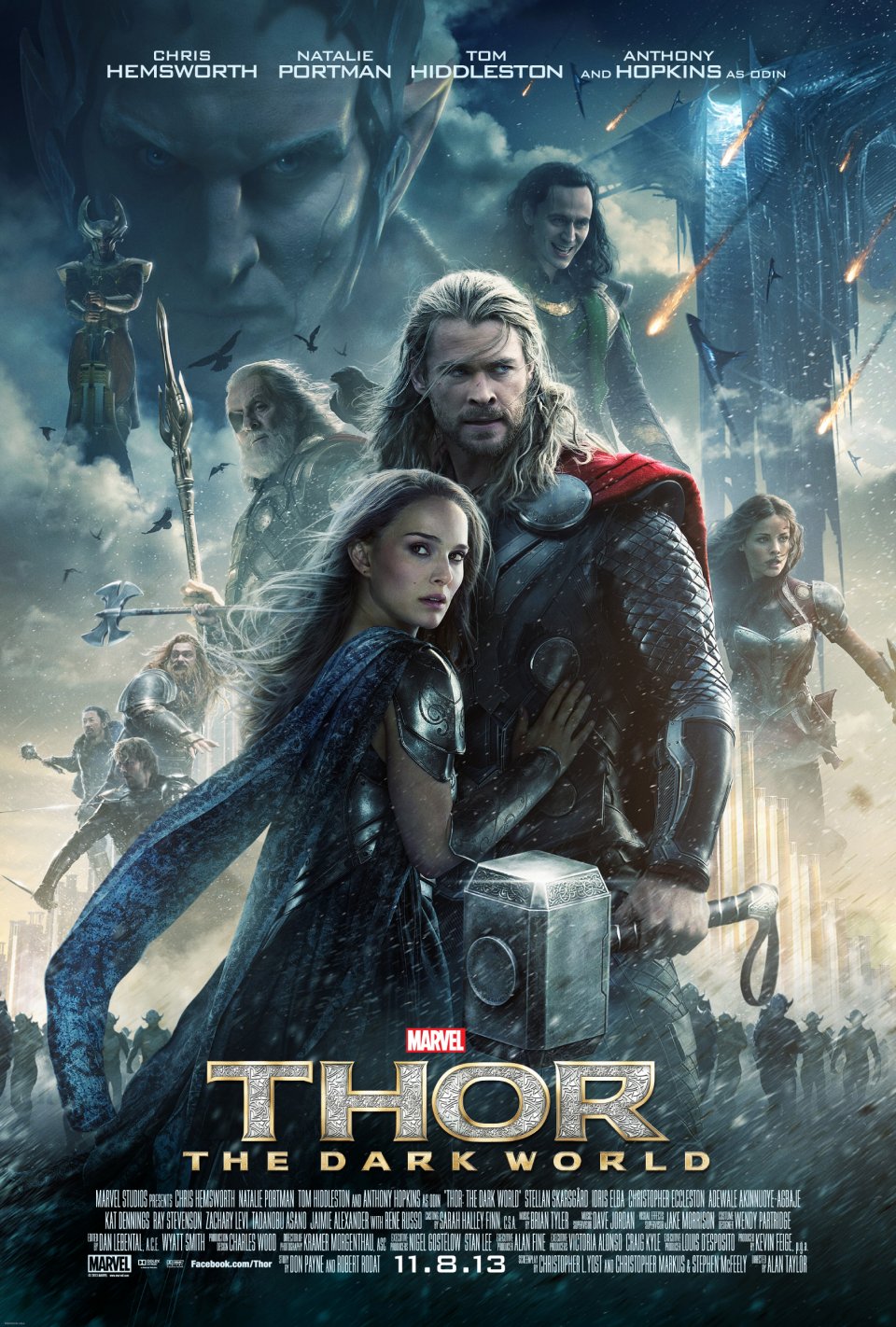 Romance, war, laugh out loud humor,  action, revenge, and two handsome brothers finally (if Loki is to be trusted) fighting on the same side, all come together for this much anticipated sequel. Thor: The Dark World is part Lord of the Rings, part Star Wars, and part Doctor Who; all of which quite frankly make for an all-around enjoyable film that never slows down for an instant and even outshines the first.

In the first outing, much time had to be devoted to introductions. In the sequel, this is no longer the case, villains and new intern aside. This definitely benefits all the characters in that the writers can focus on building on what they have already done previously regarding characterization in both Thor and in The Avengers. The romance between Jane and Thor profited the most as I always found their romantic development (while extremely likable) to be a little underdeveloped in the first film. Now that they are past the first stages of the romance, this story begins where they left off rather nicely.

Two years have passed for Jane since Thor left with his promise to return. Yet, he still hasn’t…That doesn’t bode well for good reasons, especially since she witnessed Thor all over the news based on the events during The Avengers. I probably wouldn’t have been so happy with his non-visit then either. Nevertheless, Jane has never ceased trying to get back to her Doctor, I mean god…alien, or in this case Thor. Searching for him using her science in London of course (because this HAS to be a little like Doctor Who mind you), leads her to an anomaly that transports her to another world, opening the door for a reunion with the man she loves when Heimdall, the guardian, can no longer see her. Thor must return to save her and thus begins their second adventure; however, this time Jane gets to visit Thor’s home and family (the King not open to their relationship, even comparing her to a goat in a familiar argument I have heard from ‘some’ of the online community regarding the Doctor and Rose).

Thor and Jane’s scenes are funny, swoon inducing romantic, and well done. I believe authentically that Thor would want to choose this human over the woman he ‘should’ choose, the likable and loyal warrior woman Sif. The themes present of near immortality versus Jane’s short mortal life (especially since her life is in danger thanks to the energy inside of her that begins to kill her) stand strong as Thor realizes that he can only spend (no matter if one more day or one hundred years) a short time with the only woman he has ever loved. Now that there are obstacles in their relationship (including the King being against them), their relationship feels more developed and complete.

Romance aside (and there are several amazing want to rewind moments), I want to talk about the villains. How can I not bring up the awesomeness of Christopher Eccleston (the 9th Doctor of Doctor Who)? As the evil elf Malekith, he is menacing and powerful. He is believably evil. The story is also strong, reminding me of Lord of the Rings with the ancient battle that had supposedly been won but then it is once more awakened and once more needs to be stopped. Like all good villains, Malekith believes what he is doing is right for his people (that were almost all slaughtered by the people of Asgard) even if he desires to bring the world into darkness.

Then there is Loki. He gets the best lines of the entire movie and also receives much better treatment than he received in The Avengers. Although I enjoyed the film, I never felt like he was exactly in character to the man from Thor becoming just slightly more one dimensional. In Thor, his actions were for family and to prove himself worthy as a future King. This film returns to that Loki, giving him even stronger characterization as one considers his relationship with his mother. Being that he is also the trickster, it is also fun to watch him play games and fool people with illusions. The brotherly relationship and competitive jabs between the two make them even more entertaining to watch.

Besides the fun action (that surprisingly never became boring like some superhero films can do when they go on and on and on), there was never a dull moment to be had. This film is downright funny. Besides Loki, the fight scene between Thor and the dark elf Malekith is enjoyable because it is consumed by humor. The writers and director just don’t take themselves too seriously and in a world of superhero films post The Dark Knight, this is very refreshing. The side characters get humor as well, particularly Erik (the kooky scientist that gets arrested for running nude and looking crazy with his all too true theories) and Jane’s intern Kat who gets an intern of her own.

This is a fantastic superhero film with some great surprises that I won’t spoil for you. I’d dare say it is even better than The Avengers. So if you like your superhero films with strong romantic elements, excellent fantasy mythology building, entertaining action, and light-hearted humor that bring the magic of movies to life, then go see this movie. It is worth seeing on the big screen. In fact, I plan on seeing it a second time if at all possible.

Our romance-themed entertainment site is on a mission to help you find the best period dramas, romance movies, TV shows, and books. Other topics include Jane Austen, Classic Hollywood, TV Couples, Fairy Tales, Romantic Living, Romanticism, and more. We’re damsels not in distress fighting for the all-new optimistic Romantic Revolution. Join us and subscribe. For more information, see our About, Old-Fashioned Romance 101, Modern Romanticism 101, and Romantic Living 101.
Pin this article to read later! And make sure to follow us on Pinterest.
By Autumn Topping on November 8th, 2013