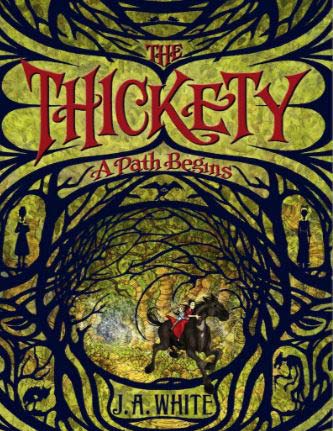 Hand in hand, the witch’s children walked down the empty road.

When Kara Westfall was six years old, her mother was convicted of the worst of all crimes: witchcraft. Years later, Kara and her little brother, Taff, are still shunned by the people of their village, who believe that nothing is more evil than magic . . . except, perhaps, the mysterious forest that covers nearly the entire island. It has many names, this place. Sometimes it is called the Dark Wood, or Sordyr’s Realm. But mostly it’s called the Thickety.

The black-leaved trees swayed toward Kara and then away, as though beckoning her.

The villagers live in fear of the Thickety and the terrible creatures that live there. But when an unusual bird lures Kara into the forbidden forest, she discovers a strange book with unspeakable powers. A book that might have belonged to her mother.

And that is just the beginning of the story.

The Thickety: A Path Begins is the start of a thrilling and spellbinding tale about a girl, the Thickety, and the power of magic.

Magic. Temptation. Witch Hunts. Secrets. Power. These are all words that aptly describe the first Thickety book, an enchanting beginning for those of us who love fantasy. J.A. White also has quite a good grip on suspense and creepy horror, The Thickety a book you may not want to read in the middle of the night.

The story begins with Kara’s mother being killed for being a witch. The fantasy setting definitely harkens back to the feel of historical witch hunts which makes the beginning all the more chilling. Add in a magical monster that can test humans to see if they are witches or not, and the fearfulness of this moment becomes even more intense.

Years later, Kara and her younger brother are outcasts in their village. They are the children of a convicted witch after all. What if Kara has her mother’s evil powers? Barely able to survive thanks to a now useless father, Kara does what she can to take care of the family while still a child herself. It doesn’t help that everyone sees her as an ‘other’, a person to be constantly ridiculed and hated, particularly by the most horrible girl at school.

Then, one day, Kara enters the forest, the Thickety, a place you are never to enter and discovers her mother’s magical book. Soon, she begins to understand her own powers and the temptation to use it for evil and revenge becomes a new temptation. Suspense builds as the townspeople begin to suspect her. Of course, other danger and evil lurk nearby.

Overall, The Thickety: A Path Begins is a great middle grade read especially if you are a fan of The Witch of Blackbird Pond (there are comparisons to be made) and fantasy books about witches. It should be noted that as this is a series, the novel ends on a HUGE cliffhanger. Thankfully, two more books are already published so you can make this one a book binge!

While The Thickety could easily be made into a film series, a TV show would be immensely better so the writers could focus on characterization and the mythology in a less rushed way. The series format of the books also makes TV a better choice. Perhaps a limited TV series event for a streaming site like Netflix, Amazon Prime, or Hulu. As for casting, I can imagine no one else as Kara but Millie Bobby Brown from Stranger Things (Eleven). She’s seriously amazing and this show, like Stranger Things, would need a young teen actress who can act without being cutesy.

What do you think about The Thickety: A Path Begins? Sound off below…

Our romance-themed entertainment site is on a mission to help you find the best period dramas, romance movies, TV shows, and books. Other topics include Jane Austen, Classic Hollywood, TV Couples, Fairy Tales, Romantic Living, Romanticism, and more. We’re damsels not in distress fighting for the all-new optimistic Romantic Revolution. Join us and subscribe. For more information, see our About, Old-Fashioned Romance 101, Modern Romanticism 101, and Romantic Living 101.
Pin this article to read later! And make sure to follow us on Pinterest.
By Autumn Topping on July 27th, 2016