The Spanish Main is a 1945 swashbuckler film about an honorable Dutch sea captain who turns pirate to get revenge against an evil viceroy who wronged him. It all starts when Laurent Van Horn’s ship shipwrecks off the Colombian coast. He turns to Don Alvarado, the Spanish Viceroy, for help. Instead, the Viceroy imprisons Van Horn for no clear reason other than greed. Luckily, Van Horn and other prisoners escape! Of course, what else is there to do but become plundering pirates? Especially when Don Alvarado controls the Caribbean seas after all.

Five years later, the creepy Don Alvarado awaits his bride-to-be to arrive. Meanwhile, news of the pirate Barracuda spread wide and far, irking the mustache-twirling villain because of the Barracuda’s destruction on the high seas. Even more unfortunate for Don Alvarado is the unlucky fact that his fiance also just so happens to be on board the same ship as our dashing pirate. And we can all guess who she’s going to prefer…

But it’s not all romance at first. Francisca, our romantic heroine straight out of a romance novel, meets a mysterious sailor on her ship. She’s intrigued by his good looks, wondering if her fiance will be half as good looking as he is. But he insults her high minded ideals and gets whipped for his insolence.

RELATED | MAN CANDY – 26 OF THE MOST HANDSOME CLASSIC FILM ACTORS

Soon after his men swarm her ship, he discovers Francisca’s identity and kidnaps her as part of his revenge scheme against Don Alvarado. To save lives and another Spanish ship, Francisca agrees to willingly marry the Barracuda instead if he lets the ship and their people live. He agrees. She’s the prize against Alvarado after all.

Their wedding night goes unconsummated (because Van Horn has to be gentlemanly compared to his forceful behavior earlier if we’re to root for him) while other pirates don’t like Van Horn’s plans involving Francisca. Then, of course, there’s the jealous Anne Bonny, who even challenges Francisca to a hilarious duel.

Obviously, love follows, particularly once Francisca realizes Van Horn is nobler than he seems and Don Alvarado is rather disgusting in comparison to her handsome pirate. There’s no way she would want to marry the despicable Alvarado so she must find a way to save the man she actually loves! Sword fights ensue and the ‘good’ guys will obviously win by the end. 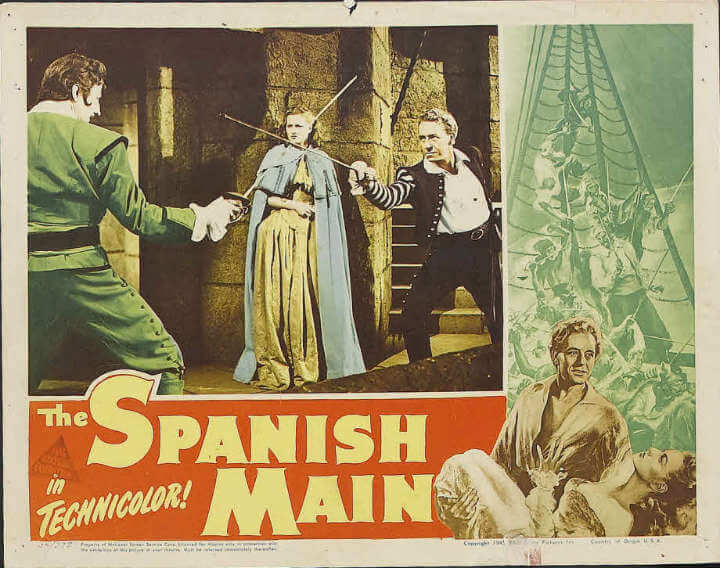 What makes The Spanish Main so entertaining is hands down the performances. Paul Henreid (Now, Voyager and Casablanca) plays our romantic pirate with likability though it’s certainly not one of his top roles, while the always fabulous Maureen O’Hara plays the fiery Francisca to perfection. Only her acting skills and delivery of what would be really bad lines make it believable she could fall in love with the pirate who kidnapped her. Everything is completely absurd but you keep watching anyway. Not to mention, the dialogue is so over the top that you’ll cringe and laugh in a good way. Well, most of the time.

RELATED | AHOY, ROMANCE! PIRATES AS A ROMANTIC HERO IN FICTION

What hurts the film the most (besides the absurdity) is that the script IS extremely sexist and troublesome when it comes to consent. But if you look at the movie through the lens of the past, several moments can be overlooked in context. Plus, Anne Bonny (the iconic female pirate) sparring with Francisca is a good bit of campy fun. Overall, if you love romantic swashbucklers, watch The Spanish Main in all its technicolor glory. Just don’t take it too seriously.

Where to Watch: You can rent or buy The Spanish Main on Amazon Prime, iTunes, or on DVD. The movie also airs on TCM from time to time.

Content Note: While Not Rated, I would say PG for innuendo, misogyny, and violence.

What do you think about The Spanish Main? Sound off below…

Our romance-themed entertainment site is on a mission to help you find the best period dramas, romance movies, TV shows, and books. Other topics include Jane Austen, Classic Hollywood, TV Couples, Fairy Tales, Romantic Living, Romanticism, and more. We’re damsels not in distress fighting for the all-new optimistic Romantic Revolution. Join us and subscribe. For more information, see our About, Old-Fashioned Romance 101, Modern Romanticism 101, and Romantic Living 101.
Pin this article to read later! And make sure to follow us on Pinterest.
By Autumn Topping on December 6th, 2018