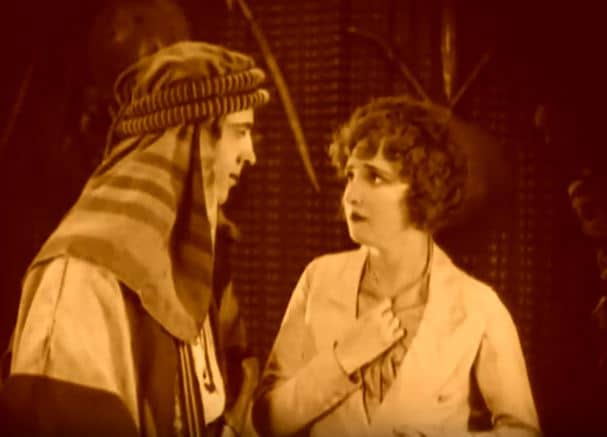 In The Sheik, Lady Diana Mayo is an aristocratic orphan visiting the African town of Biskra. With only her brother to guide her, she has become wild, independent and naively fearless. Diana plans an extended tour of the desert with no one other than a local guide to protect her. Her fellow British aristocrats warn Diana about the dangers to a single white woman traveling alone, but she ignores them.

The night before her departure, Diana visits a local casino only to be denied entrance because of a private party for a young sheik. In defiance, Diana disguises herself and sneaks into the casino. It is not long until the sheik, Ahmed Ben Hassan, discovers her. Though he expels her, she has also caught his eye. Diana finds him equally fascinating.

After heading out for her desert trek, Diana and her guide are surrounded by what appears to be Bedouin warriors. But, as she soon discovers, it is Ahmed. He quickly abducts her, whisking her away to his desert camp. Ahmed has his own plans for Diana, but she refuses him at every turn. It is a battle of the wills and wits, between a Sheik accustomed to immediate obedience and a woman used to her independence.

Though she attempts to escape, eventually Diana accepts her gilded prison. But she still refuses to yield her heart to Ahmed. Just when she finally comes to terms with her emotions towards the Sheik, she is kidnapped once again by a bandit with nefarious purposes in mind. This forces both Ahmed and Diana to face the truth about their relationship. Will the Sheik recapture both Diana and her heart?

A silent film is a very different medium than the talking pictures we are used to. Though all films tell a story, the way that story is told requires different skills and techniques in a silent film. Those unfamiliar to the world of silent cinema may find the exaggerated body language and facial expressions a bit off-putting at first.

To call these early films silent is a bit misleading. Though there is no spoken dialogue, there is musical accompaniment for the entirety of the film. Silent films also utilize title cards. These feature narration and dialogue to help move the story arc along.

MY REVIEW OF THE SHEIK 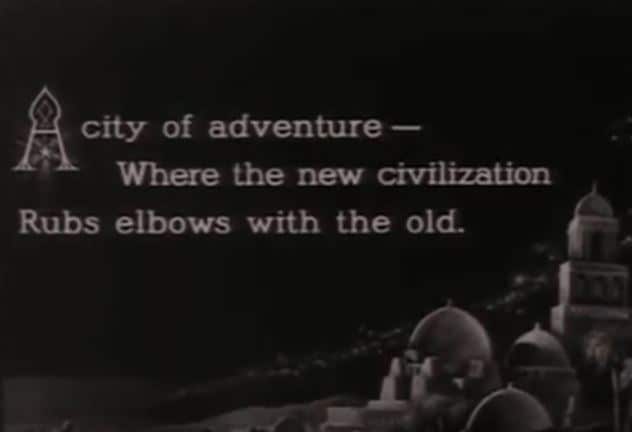 The Sheik is based on a novel of the same name by author Edith Maude Hill. It was so popular that Paramount Pictures brought it to the screen.

This is a story which must be viewed through the lens of its’ time. Modern sensibilities might have a difficult time appreciating a story of forced abduction. Some could also argue that it has racial overtones which might be offensive in today’s world. The scandal created by a Bedouin chief kidnapping a white British woman does not fit in with today’s equality narratives. Even if that Sheik is Paris-educated and also turns out to be half-English himself. Thankfully, some of the novel’s more extreme plot points, including rape, have been toned down for the screen.

If you can get past the challenges of watching a silent film as well as some of the issues with the story, The Sheik is fairly entertaining. It is equal parts drama, romance, and adventure. Despite the limitations of early film, the production is well done. Filmed in black and white, some of the frames are actually tinted with color, which I did find to be a bit of a distraction.

RELATED POST: Advance YA Book Review: In the Eye of the Storm, The Further Adventures of Lilly Linton

The real reason to watch The Sheik is for the stars. In his breakout role, Rudolph Valentino plays Sheik Ahmed Ben Hassan. Though he overacts in the first half of the film, by the second half he settles into a really good performance. Valentino appeared in other films before this. However, as the Sheik he not only cemented his status as one of the earliest film superstars but popularized this type of story. Sadly, his reign in Hollywood was short-lived. Valentino tragically passed away a couple of years later after completing work on the sequel The Son of the Sheik at the age of 31. But the onscreen charisma and magnetism which drew the audience of his day to the theaters are still clearly felt on screen decades later.

Agnes Ayers who plays the Lady Diana was a popular actress in the ’20s. Her performance in The Sheik is my favorite. Though her facial expressions are still more exaggerated than those common in talking films, she is much more subtle and natural than her co-star. She plays a range of emotion from defiant, to scared, to submissive to an equal. She makes me feel the frustration, confusion, and determination of Lady Diana. When she finally admits to herself that she loves her abductor, she makes it absolutely plausible to the audience that such a thing could occur.

Viewers with a sharp eye will also notice a familiar face in the Sheik’s French doctor friend Raoul de St. Hubert. The same man who plays Mr. Pendergast in Disney’s Pollyanna is the man who befriends Diana and challenges Ahmed in his treatment of her. Adolphe Menjou was a fixture on the screen for decades, from 1916 -1961.

For those who love film history, The Sheik is definitely a film to watch. It gives a glimpse into the story trends, production capabilities and popular stars of the time. It is also a clear example of how much the public’s mores and standards have changed in the past century. I doubt this type of film could be made today as it certainly defies our current politically correct culture.  Still, if you can look past its’ flaws and lack of conformity to modern expectations and film advancements, The Sheik is an entertaining and enduring example of the art of silent film.

Content Warning: Though the content matter is mature, it is very tame and there is nothing graphic shown on screen.

Where to Watch: Buy on DVD. It is also available on YouTube, but I can’t guarantee the quality of the print.

Have you ever watched a silent film? What is your opinion on abduction romances?

Our romance-themed entertainment site is on a mission to help you find the best period dramas, romance movies, TV shows, and books. Other topics include Jane Austen, Classic Hollywood, TV Couples, Fairy Tales, Romantic Living, Romanticism, and more. We’re damsels not in distress fighting for the all-new optimistic Romantic Revolution. Join us and subscribe. For more information, see our About, Old-Fashioned Romance 101, Modern Romanticism 101, and Romantic Living 101.
By Brittaney B. on March 8th, 2018