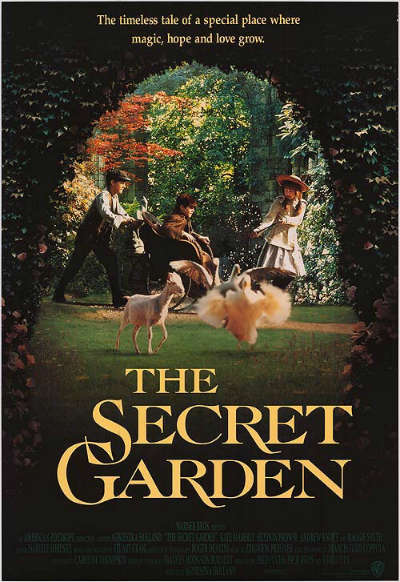 Disclaimer: This was one of my favorite films as a kid, and reviewing it as an adult, I found very little to fault it for!

The Secret Garden is based on the Frances Hodgson Burnett book of the same name, with the screenplay by Caroline Thompson, who also wrote many screenplays for Tim Burton — Edward Scissorhands, The Nightmare Before Christmas, and Corpse Bride. The film follows Mary Lennox (played by Kate Maberly), a British girl raised in India at the height of British colonialism.

The opening title sequence shows Mary as she is tended to by her nanny, spending more time with her nanny or alone, than with her parents.

Mary is an angry girl, and woefully neglected, but very smart.

When her parents are killed in an earthquake (one of the largest plot points that deviate from the novel; in the novel, her parents die from cholera), she is sent to England to live with her uncle, Lord Archibald Craven (John Lynch).

Lord Craven doesn’t come to pick Mary up from the docks, instead the head housekeeper Mrs. Medlock (portrayed by the wonderful Maggie Smith) arrives, commenting that Mary is a strange child and doesn’t look much like her mother. Mrs. Medlock also reveals that Mary’s aunt, her mother’s twin sister, has been dead for some time. Mary has little reaction to this, other than, “My mother didn’t have time to tell me stories.”

They travel to Lord Craven’s estate, Misselthwaite Manor, which, in its first appearance, is dark and huge and foreboding (as any estate should be from this time!). Mrs. Medlock promptly tells Mary that she is not to go exploring around the manor and that her uncle will see at some point. Mary almost immediately forgoes Mrs. Medlock’s warning and starts to wander around the manor. She happens upon a room that looks exactly like her mother’s dressing room, with a photo of her mother and her aunt on a swing in a garden. (Another deviation from the novel; it is Mary’s father and his sister that are related, not her mother, and they are siblings, not twins.) There is a key in the jewelry case that she finds but leaves in the case. She hears what sounds like someone crying, but before she can investigate further, Mrs. Medlock catches her and throws her back in her room.

One of the other servants, an older girl named Martha (Laura Crossley), tries to be kind to Mary and tells her that her brother Dickon (Andrew Knott) tends to wander around the estate grounds as well, with his animals.

Martha sends Mary outside where she discovers both Dickon and  a locked door that may have a garden behind it. As Mary puts the pieces together — the key in her aunt’s case is the key that opens up the door to the garden — and she tries to discover the origin of the crying she hears in the manor, she begins to learn more about life and herself.

One night, she stumbles upon the person crying in the manor, who turns out to be her cousin, Colin (Heydon Prowse). He’s bedridden and has been his entire life. His father refuses to see him, which Colin thinks is because he reminds his father too much of his late wife. Mary and Colin bond, but as Mary spends more time outside in the garden and with Dickon, she sees how selfish Colin is and perhaps how her own behavior before coming to the manor mirrored his. She takes it upon herself to make Colin see that he really isn’t sick and that there is a whole world outside of his room and the manor, waiting to be explored.

The garden flourishes, but will it be enough to spark happiness and love in a place that has lost it for so long?

The film, though released in 1993, has not aged, which I think is in part to the great direction of Agnieszka Holland, and the cinematography by Roger Deakins. Period pieces, though set in a non-contemporary setting can still age, and the beautiful, wide shots of the Misselthwaite Manor keep the film from doing so.

The score by Zbigniew Preisner is gorgeous and lends itself to the emotional journey that the characters experience. There is not a lot of romance in the story, per se (there are frequent references to how much Lord Craven loved his wife), but overall, there is a romantic element to the film, with its sweeping shots of the estate and the mystery that pulses steadily throughout.

The one qualm I did have (that I didn’t have as a kid) was that the pacing is a bit slow, but not enough to take away from the quality of the film. The Secret Garden is a quiet testimony to the magic that children experience, and how small changes can affect people’s lives in big ways.

The Secret Garden is rated G, and available on DVD, and for rent through Amazon Prime.

You must allow me to tell you how much I ardently adore and admire you.”

Our romance-themed entertainment site is on a mission to help you find the best period dramas, romance movies, TV shows, and books. Other topics include Jane Austen, Classic Hollywood, TV Couples, Fairy Tales, Romantic Living, Romanticism, and more. We’re damsels not in distress fighting for the all-new optimistic Romantic Revolution. Join us and subscribe. For more information, see our About, Old-Fashioned Romance 101, Modern Romanticism 101, and Romantic Living 101.
Pin this article to read later! And make sure to follow us on Pinterest.
By Clarissa Hadge on October 14th, 2015