I have a confession to make. My favorite Shakespeare play is not Hamlet or Romeo and Juliet. No, one of my favorite plays by the Bard would have to be Macbeth. The story is fascinating, and the play raises some interesting questions about fate, prophecy, responsibility, bravery, madness, and loyalty. 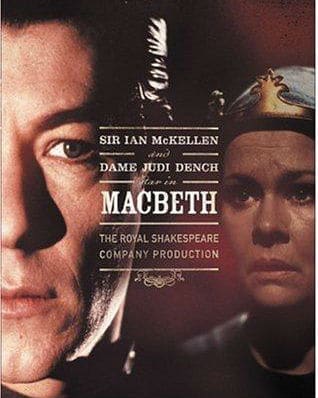 Called “The Scottish Play,” Macbeth is a strange member of the Shakespeare Canon. Rumor has it that the play was cursed by a local coven of witches because of the spells Shakespeare used. There are also people who doubt that Shakespeare actually wrote the play since it doesn’t seem to follow many of his rules. Historically, there have been lots of accidents surrounding productions of “The Scottish Play.” As a result, it is considered bad luck to say the name of the play while in a theater.

It’s a play that asks a lot of questions about human nature, and some of them are hard questions. So when I saw that Acorn TV was streaming the 1979 filmed for television version of the play, performed by the Royal Shakespeare and starring Ian McKellen as Macbeth and Judi Dench as Lady Macbeth, I got excited. 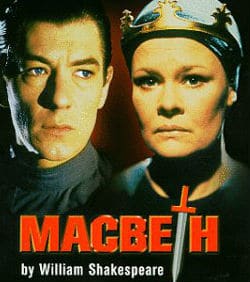 Macbeth follows a guy named Macbeth, a Scottish Thane who has recently proved himself to be loyal to his king. The King executes the Scottish traitors and decides to give their titles to Macbeth. Meanwhile, Macbeth meets three witches. They tell him that he will get a promotion. Later, they promise, he will become king. Also, his best friend Banquo’s kids will be kings. The two men are skeptical, but when Macbeth gets a promotion, he begins to wonder if he will be king someday.

Sadly, King Duncan did not get the memo about Macbeth’s future and names his son Malcolm his heir. Lady Macbeth wants to be queen, however, and she convinces Macbeth to kill the king. He agrees and when Duncan is staying with them, Macbeth murders the king as he sleeps. He feels incredibly guilty, but things work out according to Lady Macbeth’s plans.

Duncan’s sons flee Scotland and Macbeth becomes king. Afraid that Banquo suspects the truth, Macbeth has his best friend murdered. Banquo proceeds to haunt Macbeth, who fears he’s losing his mind. Meanwhile, the Thane Macduff is even more suspicious of the new king, heading to England to find the true heir to the throne.

Macbeth visits the witches again and learns three things; he needs to fear Macduff, no man born of woman can kill him, and he won’t be defeated until the forest comes to him. Macbeth has Macduff’s family murdered, just in case. When Macduff hears, he vows revenge against the murderer Macbeth and joins forces with Malcolm to take back Scotland as Macbeth and Lady Macbeth slip further into madness.

Macbeth is interesting because it is a story that looks at the corrupting nature of power. It 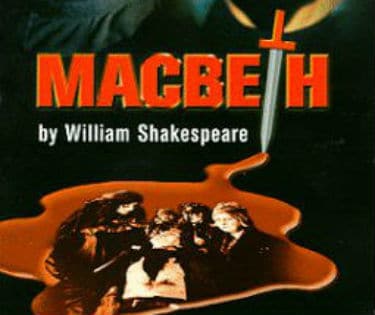 also asks if there is such a thing as fate. Did Macbeth have a choice in his actions, or was he set on a dark path the minute he met the witches? Was he always bloodthirsty, or did this happen after the first murder?

As far as film versions of Macbeth go, this might be my favorite. The actors made the characters come alive, and it was wonderful to watch. I also appreciated seeing many older and distinguished actors when they were younger.

The set is very sparse. Personally, I thought this was a nice touch.  The play focuses entirely on the actors and their inner conflict. It also leads the audience to question the sanity of the characters. Since the play deals so much with insanity, this seemed appropriate to me.

Ian McKellen portrays the inner conflict and the guilt of the title character in a convincing way. In this production, it feels like Macbeth gets bullied into the murder by his wife, and then begins to spiral out of control. He becomes a much harder character. There are flashes of that early vulnerability in the later scenes, but for the most part, it is clear that committing murder changed the character.

Judi Dench is also able to wonderfully act the conniving, power-hungry Lady Macbeth. She seems to care for her husband, but also wants to have things go according to plan. Lady M wants to be queen and will stop at nothing to make her dreams come true. Not only that, she seems to have no patience with her husband and his desire to not commit murder. Despite that, the guilt seems to hit her harder and quicker. Her descent into madness is also fun to watch, in a weird way. Dench knows just how to play it. 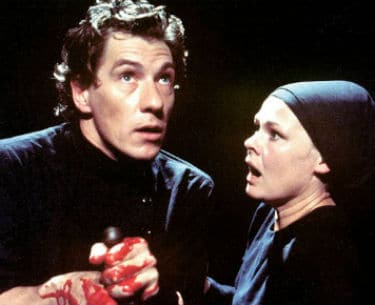 The romance in this play has always been interesting to me. Macbeth seems to legitimately care for his wife in the beginning of the play and then falls into madness gradually. By the end, Macbeth seems to care for nothing and no one, which shows the audience how far he has fallen. The Macbeths might not have a sweet romance, but he does kill the King of Scotland for her. He must love her at least a little bit. In fact, the fact that Macbeth and Lady Macbeth love each other in the beginning seems to be their main redeeming quality.

If you like watching Shakespeare or stage plays in general, or you enjoy stories about treachery, murder, and the supernatural, you will probably enjoy Macbeth. Or, if you want to see legends of the stage and screen acting in iconic Shakespearean roles, this is a good way to accomplish that. Macbeth is a good reminder of the corrupting nature of power, and this production shows us Shakespeare the way it should be performed.

CONTENT NOTE: There is quite a bit of violence, both off-screen and implied on-screen. There are also several references to murder and some swearing.

WHERE TO WATCH: You can now stream this classic theater production on Acorn TV.

Our romance-themed entertainment site is on a mission to help you find the best period dramas, romance movies, TV shows, and books. Other topics include Jane Austen, Classic Hollywood, TV Couples, Fairy Tales, Romantic Living, Romanticism, and more. We’re damsels not in distress fighting for the all-new optimistic Romantic Revolution. Join us and subscribe. For more information, see our About, Old-Fashioned Romance 101, Modern Romanticism 101, and Romantic Living 101.
Pin this article to read later! And make sure to follow us on Pinterest.
By Bailey Cavender on May 30th, 2017