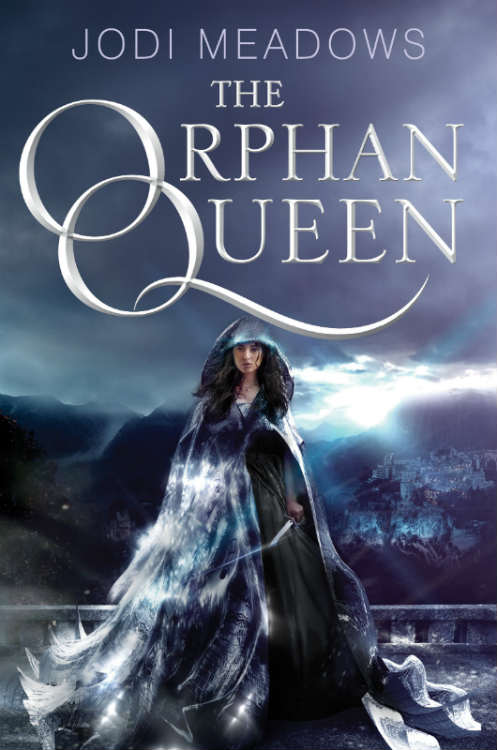 During my teen years, my reading habits would have been coined as being “safe” up until a handful of years ago. The genres I read were primarily those I’d enjoyed as a young teen and I fell into a pattern of normalcy, and while I did enjoy the feeling of “comfort,” if you will, looking for something different meant I’d need to look outside of that. In expanding my reading into the popular and growing young adult genre, Jodi Meadows’ name was among the list of authors I’d been most curious to read. Her books sounded crazy unique and exciting, which was my primary reason (not to mention her covers are epic) though I was also interested in expanding beyond my “safe” reads, which didn’t include fantasy stories. Book one of Jodi’s most recent works, the first in a duology (plus novellas), The Orphan Queen is as lovely on the inside as its dust jacket suggests.

The complex story is about neighboring kingdoms fighting off creepy wraith creatures, a king working to outlaw magic and a group of Osprey orphans building an army to reclaim their lost kingdom. Among these orphans is Wilhelmina, the queen of the lost land. Wil remembers all too well the one-night war that resulted in the death of her beloved parents, the king, and queen. Skilled at weaponry and disguise as well as being an expert forger, Wil along with her best friend, Melanie infiltrate King Terrell’s kingdom, hoping by doing so they’ll learn their enemies’ secrets in the preparation of reclaiming Wil’s kingdom. A birthright the King stole from Wil. While living in the palace, Wil begins to play a dangerous game as she tries to navigate life as a noble and a renegade who, at night runs around with the mysterious vigilante Black Knife…

Surprisingly, I found it challenging to fully become immersed in this novel. I’m not sure why since the opening is interesting and springs us immediately into the action of what’s to come, setting up its dangerous and dark world. Speaking from a pre-reading mentality, the summary of this book sounded amazing. Just the kind of story that was a 100% tailor-made book with my name on it. Eventually, the book did end up matching my expectations. The twists, the deceptions and the eventual tease of cloak and dagger romance rivaled any fantasy book I’ve read. That kind of intrigue is exactly the sort of Kryptonite that ensures this reader will love a story. There’s an almost fairy tale quality to the concept because its heroine is a lost princess of sorts. That kind of tease in the world building presents a fascinating premise with an even more interesting group of characters, all of which this magical novel possessed.

Wil is an interesting heroine, who’s a bit “dark” in comparison to some of the books I’ve read. She’s fierce and certainly a kick-butt, take charge kind of girl. I also particularly loved that she wasn’t willing to bow to the demands of the man who leads the Ospreys. When the final page is turned, if there is a minor flaw (for anyone wondering about the romantic side of this novel), the romance is virtually nonexistent or at best, subtle. It doesn’t really present until the latter quarter of the book although there is always a whisper of romance present, which is sometimes more alluring than that of the glaringly obvious.

The information is given at once (about the world’s history) rather than sprinkled throughout so that it’s the intrigue of the vigilante or how Wil is going to reclaim her throne that keeps the reader flipping pages. There are some moments when confusion rules the otherwise clean and crisp text, but it’s not because the story is poorly composed. No, instead it was merely a case of being distracted as the world (and its sects of people) is clearly laid out in the opening pages. For those considering picking up this novel, if you like fantasy reads, this would be an ideal one to curl up with during the winter months ahead.

Plus, the second novel (a story I expect will play with that romance more), The Mirror King, is right around the corner (releasing April 2016)! I’m one reader who cannot wait to see what comes in the next novel, which is set to conclude this epic fantasy duology. As far as I know this will remain a two-book series (complete with its e-book novellas already available), which I prefer over asking readers to invest in multiple year adventures. This way, our book nerd hearts can anticipate without feeling tortured. And I don’t know about you, but I say anytime we can walk away from a novel with our hearts intact, is a very good day indeed.

Have you read The Orphan Queen or any of Jodi’s other novels? If you have, what do you anticipate from The Mirror King? Comment down below with any of your thoughts.

Our romance-themed entertainment site is on a mission to help you find the best period dramas, romance movies, TV shows, and books. Other topics include Jane Austen, Classic Hollywood, TV Couples, Fairy Tales, Romantic Living, Romanticism, and more. We’re damsels not in distress fighting for the all-new optimistic Romantic Revolution. Join us and subscribe. For more information, see our About, Old-Fashioned Romance 101, Modern Romanticism 101, and Romantic Living 101.
Pin this article to read later! And make sure to follow us on Pinterest.
By Rissi JC on October 26th, 2015