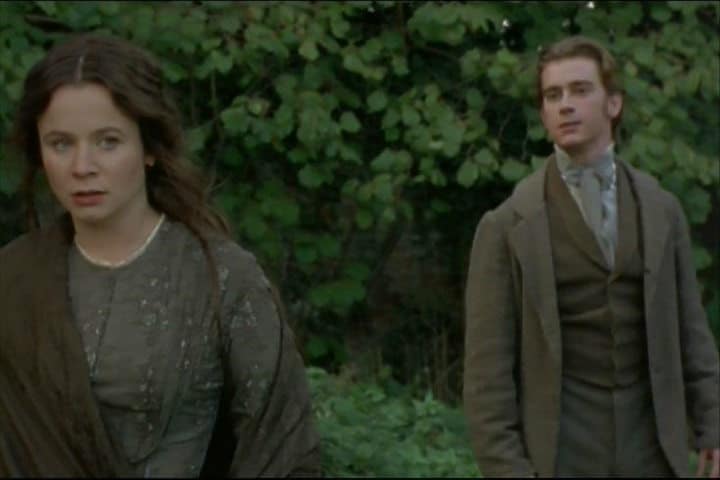 The Mill on the Floss is an adaptation of the novel by George Eliot. I have not read the book and so I cannot say if the film is a good adaptation or not. Instead, I will try to view it as its own entity.  The Mill on the Floss is a frustrating picture of a young woman caught between the constricting ties of family and her desire to forge ahead to find her independence.

Maggie Tulliver is an intelligent, passionate and non-conforming woman stifled by her life in a Victorian rural community. She has a close relationship with her cold, dutiful brother Tom whose approval she craves almost pathologically.

She seeks acceptance elsewhere and is drawn to the hunchbacked Philip, son of the man who will take everything from her family. Maggie and Philip bond over their shared passion and love of reading. However, upon discovery of this blossoming romance Tom commands her not to see him again.  Things are further complicated when her beloved cousin’s fiancé Stephen, begins to develop an obsessive love for Maggie.

George Eliot supposedly drew heavily on her own childhood and relationship with her brother in writing The Mill on the Floss. This semi-autobiographical aspect of the story only serves to heighten the tragedy of it, for it is a tragedy. Half of the major characters have a fatal flaw that drives them inexorably to their doom.

In some ways, Eliot’s novel uses and then subverts the traditional structure of a bildungsroman to condemn the strictures placed on young women in Victorian society. Maggie clashes spectacularly with her brother in a particular scene. She rails against the lack of help she is to her family due to her status as a woman and the subsequent dependence she is forced into. This scene is apparently taken directly from the book and I was impressed by how modern Maggie’s sensibilities were.

RELATED POST – 50 Books To Read if you Love Jane Austen

Maggie forms the heart of this film and you will care deeply for her. This is not least of all due to the talents of Emily Watson. Already brilliant in an early role she crackles with intelligence and frustrated passion. Bernard Hill is excellent as the single-minded and increasingly bitter father of Maggie and Tom. James Frain brings a soulful and strongly sympathetic depth to Philip. It is a pity he did not get more screen time. However, I found Ifan Meredith to be a little wooden as Tom and James Weber Brown to lack any memorable qualities as Stephan Guest. However, in both cases, this may be due to the writing of the original characters rather than any fault of theirs.

The child actors Lucy Borton, Jon Lee and Stefan Weclawek who play Maggie, Tom and Philip respectively, were all very good. This was important as we spend quite a lot of time with them. If the young actor playing child Tom looks familiar you may be surprised to learn that he went on to be a member of S Club 7. Yes, I found that hard to process too.

In terms of plot, I found myself engaged during the first two-thirds of the film. However, the last third found my interest drifting and the ending lost me entirely. Many aspects of this last third felt rushed and seemed to come out of nowhere.  I got the feeling that the filmmakers suddenly realized how little time they had left to tell the story and crammed it all in as quickly as they could.  No doubt these things were set up a little better in the novel. Indeed, I suspect that much of the spirit of George Eliot’s writing, her wry wit, intelligence and sharp social commentary on small-town rural life, has fallen by the wayside in the service of brevity. This is a real shame as it really affects the overall quality of the film.

As with many classic novels, I think the short running time of a feature film could not do the story justice. In this case, that means forcing events to occur one after the other with little explanation. This bare-bones approach to The Mill on the Floss makes it seem as if it doesn’t know what to do with its heroine and the ending is deeply unsatisfying.

The Mill on the Floss takes a realist approach to fiction choosing to show life as it was, the good and the bad. However, curiously, contrasted to the film’s realism are moments of dreamlike surreality which heighten the action. I think this is an aspect that actually works rather well.

There are two love stories in The Mill on the Floss. One sweet and one extremely ill-advised. Maggie’s connection with Phillip is believable and full of chemistry. However, the second love story is badly handled. It feels almost brushed over, with feelings springing up out of nowhere. It was due to this in large part that the final third of the film did not work for me, as it was just too unbelievable. The first love story is certainly worth watching even though not much is seen of it.

It is not a bad film but it lacks depth. Much more could have been done with a longer running time.  The Mill on the Floss is still worth watching for its heroine and her relationship with Philip. Just be prepared for a miserable ending.

Our romance-themed entertainment site is on a mission to help you find the best period dramas, romance movies, TV shows, and books. Other topics include Jane Austen, Classic Hollywood, TV Couples, Fairy Tales, Romantic Living, Romanticism, and more. We’re damsels not in distress fighting for the all-new optimistic Romantic Revolution. Join us and subscribe. For more information, see our About, Old-Fashioned Romance 101, Modern Romanticism 101, and Romantic Living 101.
Pin this article to read later! And make sure to follow us on Pinterest.
By Elinor Cackett on October 26th, 2017

10 thoughts on “Classic Review: The Mill on the Floss (1997) – A Flawed Yet Intriguing Adaptation”