I received a free copy of The Masterpiece from Tyndale House Publishers through NetGalley, to write an honest review on The Silver Petticoat Review. I was not financially compensated for this post and all opinions are my own.

An artist with a traumatic past that leaves him lost and unable to connect with others.  A woman who has experienced tragedy but refuses to give up. These two broken souls are on a collision course not only with each other but with redemption in Francine River’s The Masterpiece.

As a successful commercial artist, Roman Velasco has it all, fame, money, women, and freedom. But no one knows the man behind the name and that is just the way Roman wants it.

Grace Moore is struggling to put her life back together after a shattered marriage and a one night stand which turned her into a single mother. She desperately wants to gain her independence from the family whose boundary issues are threatening her relationship with her son. 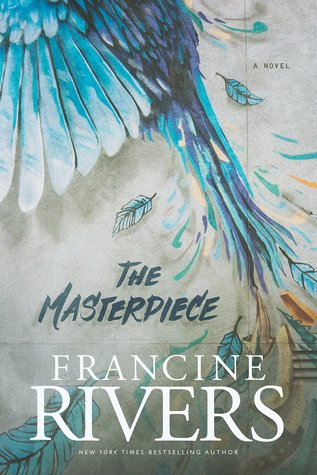 Roman’s need for a personal assistant brings Grace into his life. Grace is initially put off by his rude and overbearing behavior but needs the job too badly to quit. Though both intend to keep their relationship strictly professional, as they work together, their initial impressions of each other slowly change. Both Roman and Grace find they have more in common than they originally believed. But even as their friendship grows, their pasts continue to haunt them. And Roman’s artistic alter ego is taking risks that jeopardize not only his freedom but his life. Will Roman and Grace ever be free of the things which haunt them or will past traumas and tragedies hinder their futures forever?

Francine River is a powerhouse author in the Christian/Inspirational fiction genre. Her first novel for this market, Redeeming Love is a personal favorite which not only helped popularize the genre but set the standard for all those who followed. Over twenty-five years after it’s the initial publication, it is still one of the best selling books in that market.

It has been four years since River’s last release, so when the opportunity to review The Masterpiece arose, I jumped at the chance. It did not disappoint.

MY REVIEW OF THE MASTERPIECE

From the first page, I was drawn into the world of Roman and Grace. I could not put the book down and literally finished it in one sitting. Considering The Masterpiece runs just over 500 pages, that is saying something.

I really appreciate how Rivers took the time to build both the backstories and the relationship between Roman and Grace. Though we see the effects of their past experiences and choices, the details are so slowly revealed that the reader becomes invested in these characters. I became emotionally attached to Roman and Grace as if they were real people. I experienced equal parts compassion, frustration, anger, and joy through the emotional journey these two make.

RELATED POST: Book Review: The Woman With No Name -A Story of Romance and Mystery

The Masterpiece does a great job developing the friendship turned romance between Roman and Grace. Because of their initial impressions of each other and past mistakes, both are wary of exploring their mutual attraction. In fact, they spend a lot of time denying and fighting that attraction. So, their relationship remains on a low simmer before gradually growing into anything more than boss and employee. Even then, the emotional wounds which have crippled them, hinder any romance they might have. The slow progression to more actually frames in stark reality their personal issues, forcing each of them to confront their pain and fears.

A STORY OF REDEMPTION

Though The Masterpiece features a realistic romance, that is really not the main point of the novel. Romance is woven in, yes, but this is really a story of redemption and restoration for Grace and Roman. Each one must choose whether to let their pasts dictate their future or to face the pain of breaking free of old patterns and mindsets. Because of this focus, there is a very clear and strong message of faith which is the catalyst and foundation for their freedom.

I loved the author’s choice of making Roman an artist. This really ties into the cover, storyline, and conclusion of The Masterpiece. The cover itself is also a part of that theme and gives a hint to Roman’s true self. Though like Grace, I am not an art aficionado, the explanation of Roman’s professional process and work is a fascinating glimpse into a world I am not familiar with.

If I had to summarize The Masterpiece, I would say it is a story of grace and hope.  Its characters are broken, flawed, and above all human just like us. The message of healing and freedom is one that will stay with me for a long time.

The Masterpiece is a great fit for the wholesome, faith-based market of the Hallmark channel. But I would love to see what could be made of it with a bigger budget as a feature film. Oscar Isaac would be a good fit for the intense, emotionally unavailable Roman. Emma Watson would do a great job capturing Grace’s strength of character and vulnerability.

CONTENT WARNING: Though not graphically described, this book covers themes of abuse, neglect, prostitution, and other criminal activity.

WHERE TO BUY: The Masterpiece releases February 6, 2018, in digital and hardcover format. To pre-order check your local or online retailers. You can also buy it on Amazon.

Have you read any of Francine Rivers’ books? What is your favorite story of redemption?

Our romance-themed entertainment site is on a mission to help you find the best period dramas, romance movies, TV shows, and books. Other topics include Jane Austen, Classic Hollywood, TV Couples, Fairy Tales, Romantic Living, Romanticism, and more. We’re damsels not in distress fighting for the all-new optimistic Romantic Revolution. Join us and subscribe. For more information, see our About, Old-Fashioned Romance 101, Modern Romanticism 101, and Romantic Living 101.
By Brittaney B. on January 16th, 2018