(I received a free copy of The Austen Escape from Thomas Nelson – Fiction to write an honest review on The Silver Petticoat Review. I was not financially compensated for this post and all opinions are my own.)

Official Synopsis of The Austen Escape: Falling into the past will change their futures forever…..Mary Davies finds safety in her ordered and productive life. Working as an engineer, she genuinely enjoys her job and her colleagues—particularly a certain adorable and intelligent consultant. But something is missing. When Mary’s estranged childhood friend, Isabel Dwyer offers her a two-week stay in a gorgeous manor house in England, she reluctantly agrees in hopes that the holiday will shake up her quiet life in just the right ways.

But Mary gets more than she bargained for when Isabel loses her memory and fully believes she lives in Jane Austen’s Bath. While Isabel rests and delights in the leisure of a Regency lady, attended by other costume-clad guests, Mary uncovers startling truths about their shared past, who Isabel was, who she seems to be, and the man who now stands between them.

Outings are undertaken, misunderstandings arise, and dancing ensues as this “company of clever, well-informed people, who have a great deal of conversation,” work out their lives and hearts. 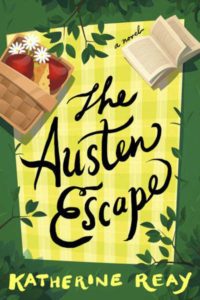 The Austen Escape is exactly just that – an escape from reality. Not only for the characters but readers as well. At a crossroads in her life, Mary unexpectedly embarks on a journey of self-discovery and what it means to truly forgive. Mary also comes to terms with the life she leads. She also re-examines her past choices and the effect those choices are having on her future.

“Austen really had a thing against Marys……We Marys weren’t a kind and gentle lot. We didn’t grow. We didn’t change. We didn’t get redeemed.”

What is beautiful about Mary’s journey is her self-reflection. It starts when Mary’s job is no longer secure. So, she decides to escape to England with Isabel. There, she discovers the holiday is an immersion experience. Guests dress in Regency costume and take on the persona of any Jane Austen character. It is telling how Isabel attempts to make Mary a secondary character in support of her own character choice. This rekindles an age-old, unspoken resentment Mary harbors towards Isabel. Where once she acquiesced to anything Isabel suggested, this time Mary refuses to be anyone’s sidekick.

As Mary peels back the layers of her life, author Katherine Reay uses heroines from Jane Austen’s most famous works to move Mary forward. Characters such as Catherine Morland, Anne Elliot, and Elizabeth Bennet feature in a variety of telling ways. From Catherine’s naivete to Elizabeth’s harsh judgments, Mary finds herself in these women who unknowingly played a huge role in her life. Secondary characters, such as Mrs. Jennings and Margaret Dashwood from Sense and Sensibility or Sir Walter from Persuasion, also play a role. Not only in Mary’s story, but in the stories of guests who took on those personas.

“The idea that one’s happiness can depend entirely on a particular person – it is not possible….Austen’s line had returned to me over and over during my two days of sleeping and moping. I hoped she, again, was right.”

While not the focus of the story, romantic love plays its own role in setting Mary down her path of self-discovery. Which, if you think about it, is very much in keeping with Jane Austen. Arriving in England to help Mary with Isabel, Nathan falls into the role of a Regency gentleman flawlessly. He seizes the opportunity to “court” Mary. Unknowingly, he strikes a nerve as he appeals to her faith in old-fashioned romance and happily ever afters.

In the meantime, Mary sees actual versions of happily ever afters in the other guests. Those relationships give Mary more to consider as she delves deeper into her own psyche.

I think The Austen Escape would make a fun, television movie. The right cast, the right location, and a screenplay that captures the spirit of the novel would make for an entertaining viewing experience. I would love to see a diverse cast in the roles of Mary, Nathan, and Isabel. I’m terrible at fan casting and welcome your thoughts in the comments below!

Final Thoughts on The Austen Escape

The Austen Escape was truly an enjoyable read. I loved the author’s insight into Jane Austen, her characterization, and how different women relate to her stories. It was also fascinating to read how “escapism” affected the different characters of the story, to include the hostess of the entire experience. The reasons each guest had for being there and how they treated the experience was reflective of where the guests were in their lives. When Mary comes full circle, you can’t help but cheer on her growth and the new take on her life.

Sidenote: No lie – the first thing I did when I finished the book was Google “Jane Austen immersion vacations.” Then, I sent a number of links to my husband in a not so subtle hint!

Have you read The Austen Escape? Are you a fan of Katherine Reay’s books? Tell me what your favorite novel is in the comments below!

Learn more about Katherine Reay and her books on her website. You can buy the book on Amazon.

Our romance-themed entertainment site is on a mission to help you find the best period dramas, romance movies, TV shows, and books. Other topics include Jane Austen, Classic Hollywood, TV Couples, Fairy Tales, Romantic Living, Romanticism, and more. We’re damsels not in distress fighting for the all-new optimistic Romantic Revolution. Join us and subscribe. For more information, see our About, Old-Fashioned Romance 101, Modern Romanticism 101, and Romantic Living 101.
[/et_pb_text][/et_pb_column][/et_pb_row][/et_pb_section]
By Catherine on December 5th, 2017