THE MAN FROM SNOWY RIVER SYNOPSIS

An Australian western set in the 1880’s, The Man From Snowy River is the story of young Jim Craig who was born and raised in the mountains. After an accident that kills his father that also leads to Jim’s horse escaping to run free with a pack of wild horses, Jim must leave the family homestead to seek work and respect in the lowlands.

He finds a job with wealthy cattle rancher Harrison and meets Jessica, Harrison’s strong willed daughter. The boss assigns Jim to menial tasks, earning disdain from other ranch hands. But he finds relief in his developing friendship with the boss’s daughter who shares his love for horses.

When Jim and Jessica make the risky decision to break and train Harrison’s new and expensive colt, it leads to a confrontation with Harrison. Jim is fired and Jessica runs away from her father’s harsh hand and the threat of finishing school.

Jealous ranch hands then frame Jim for the release of the colt. Jim must prove his honor and integrity by rescuing Jessica and also recovering the colt which now runs with the Brumbies. This is the same group of wild horses which his own horse has joined and which has roamed freely for many years.

Jim’s task will either be the making or the breaking of him and could earn him respect and the title The Man from Snowy River.

Jim has both an innate and learned skill with horses. Henry Craig is not just Jim’s father but his friend and the loss of this parent results in the loss of his way of life. He is humble, yet sometimes chafes at doing menial work. Jim is willing to step in to help or to share his knowledge with others. His patience and inner strength of character quietly reveal itself as the story progresses.

Kirk Douglas plays the dual roles of Harrison and Spur, two brothers who fell in love with the same woman. Matilda’s decision to marry the first brother to make his fortune leads to disaster for them all with long term ramifications. Harrison becomes wealthy and respected. He is also a hard and bitter rancher who refuses to speak to Jessica about her mother and pretends his brother is dead.

Spur moves into the hills and spends his life in his mine, fruitlessly searching for gold. Despite losing more than just the woman he loves, he remains optimistic and steadfast. After his friend Henry Craig dies, Spur acts as a friend to Jim, encouraging him and giving him advice. He is more forgiving than his brother Harrison, even though he has much more to forgive.

Jessica is the daughter of Harrison and Matilda who dies in childbirth. She is headstrong like her father and sometimes rebellious, but she is also smart, determined and patient. She is raised at home by her mother’s sister who instills in Jessica feminist ideals and independence. This often leads her into conflict with her father who is not happy that his daughter wants to someday follow in his footsteps.

I do not generally prefer Westerns, although I occasionally find one which I really enjoy. I don’t know if it is because I grew up watching this with my family or if it is the quality and storyline of this film, but I really love The Man from Snowy River.

Who knew that Australia could produce a western as engaging and beautifully shot as any made in Hollywood?

Even though the main story line focuses on Jim Craig’s journey to manhood, it is a complex film which weaves together several other underlying themes. These threads all tie together to portray a picture of family, sacrifice, respect and forgiveness.

The friendship between Jim and Jessica eventually blossoms into a romance. Despite the old-fashioned qualities of their love story, I found this one of the least compelling aspects of the film. Although they are believable as friends, I find their romantic chemistry lacking a bit. In some scenes, Jim and Jessica act more like squabbling siblings than love interests. Still, it does not detract much from their relationship.

The gorgeous Australian scenery as well as a perfectly matched music score only enhance this film. I have noticed that well-composed film scores sometimes remain quietly in the background adding to the story without the viewer’s awareness. But that is not the case with The Man from Snowy River. This music was meant to be heard and acts as a spotlight for various moments in the film. One of my favorite scenes is when Jessica finally masters Beethoven’s Fur Elise on the piano. It is one of the best interpretations of this classical song that I have heard. 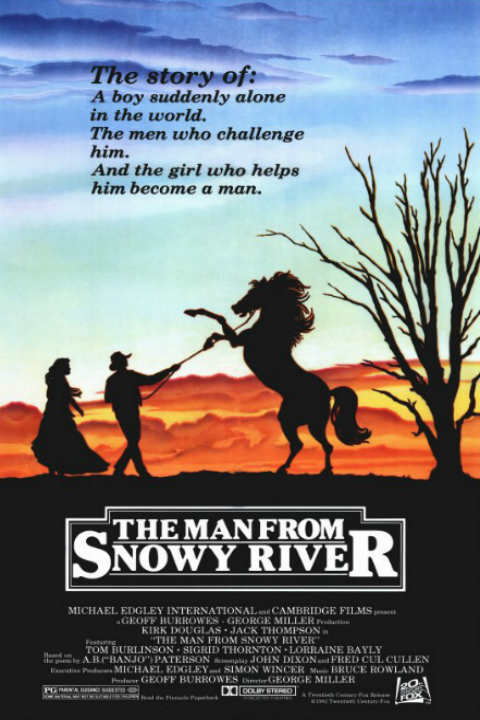 Obviously, when Kirk Douglas is in a film, you can expect a certain caliber of acting. He gives an amazing yet understated performance playing both brothers. It’s fascinating to see him play two different characters in the same film. As Harrison, he stands tall and commanding, striding about with the confidence of a self-made man. Douglas plays Spur as a man bent but unbowed by life and this comes across in his posture. Physically, Spur appears smaller and shorter than Harrison, which is amazing considering Douglas’ personal height doesn’t change.

I have not seen Tom Burlinson or Sigrid Thornton in any other film, but I love their portrayals of Jim and Jessica. They are very believable and I was astonished to find that Burlinson had never ridden before making this film. That is impressive when considering that he did his own stunts, one of which has him taking his horse over a cliff.

I must also commend Lorraine Bayly who has a small role as Jessica’s aunt, teacher and mother figure, Rosemary. She plays a strong woman who must continually stand up to an angry Harrison while also displaying care and compassion for her niece.

I particularly love Jack Thompson in the minor part of Clancy, a locally famous horseman. He played Clancy so naturally that I really thought he was an actual cowboy and not an actor who has multiple screen credits.

Although this is classified as a Western, it also has elements of adventure, drama, and romance which should appeal to a wider audience. The characters, story lines, scenery, and music all add up to make The Man from Snowy River an enjoyable classic which can be watched again and again.

Where to Watch: The Man from Snowy River is available for sale on DVD and can also be streamed on Amazon or YouTube.

Content Note: This film is rated PG and is safe for the whole family to watch.

Have you seen The Man from Snowy River? Do you have a favorite Western film? Let me know in the comments.

Our romance-themed entertainment site is on a mission to help you find the best period dramas, romance movies, TV shows, and books. Other topics include Jane Austen, Classic Hollywood, TV Couples, Fairy Tales, Romantic Living, Romanticism, and more. We’re damsels not in distress fighting for the all-new optimistic Romantic Revolution. Join us and subscribe. For more information, see our About, Old-Fashioned Romance 101, Modern Romanticism 101, and Romantic Living 101.
Pin this article to read later! And make sure to follow us on Pinterest.
By Brittaney B. on March 31st, 2017