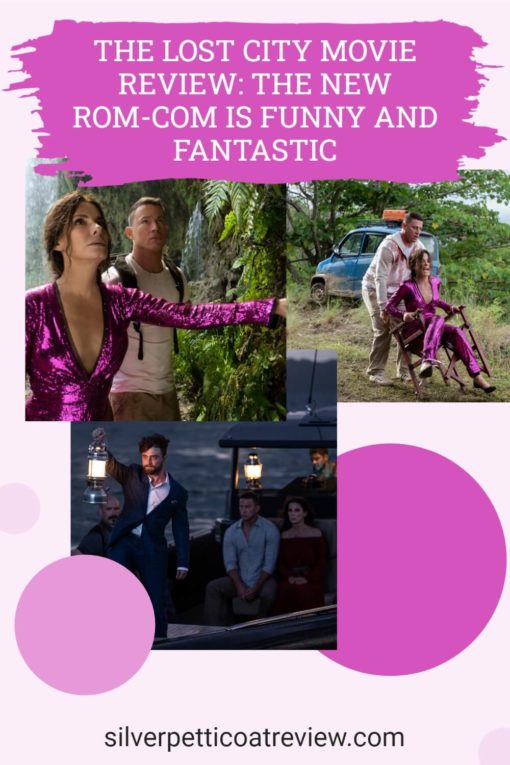 Why aren’t there more movies like The Lost City? In the same style as Romancing the Stone (the classic romance starring Michael Douglas and Kathleen Turner), The Lost City takes familiar tropes and spins them around for a fun film full of romance, comedy, a silly villain, and lots of adventure. And I loved it.

In a clever twist, Channing Tatum is the damsel in distress this time around, while Sandra Bullock is the intelligent heroine/romance novelist often saving the day. Although they also save each other!

Now, before I jump into my complete review, here is everything you need to know about the charming new romantic adventure film.

Yes, the movie is just like the trailer shown above: Silly, fabulous, funny, and fantastic.

While on tour promoting her new book with Alan, Loretta is kidnapped by an eccentric billionaire (Daniel Radcliffe) who hopes that she can lead him to the ancient lost city’s treasure from her latest story.

Wanting to prove that he can be a hero in real life and not just on the pages of her books, Alan sets off to rescue her. Thrust into an epic jungle adventure, the unlikely pair will need to work together to survive the elements and find the ancient treasure before it’s lost forever.

THE LOST CITY CAST (AND OTHER FILM CREDITS):

Besides Bullock and Tatum, the film also stars Daniel Radcliffe as a spoiled and villainous billionaire, Brad Pitt as a handsome former Navy Seal named Jack Trainer, Da’Vine Joy Randolph as Loretta’s publicist, Beth Hatten, and Oscar Nuñez in a scene-stealing part (reuniting with co-star Bullock from The Proposal) as Oscar.

Sure, we’ve seen The Lost City before, but does it matter? How many more superheroes, artistic indies, and raunchy comedies do we need? It’s time for the return of the actually funny rom-com on the big screen. And Sandra Bullock’s latest proves it’s just what the doctor ordered.

The film also works as a satirical (but still loving and respectful) look at romance novels, making the movie even more enjoyable.

The Lost City follows reclusive romance novelist Loretta Sage, a former archaeologist who writes a popular series of romantic adventure novels about a dashing hero named Dash. Because what else?

But she just wants the story to end. She’s even considering killing Dash off. Too bad her publicist Beth (comical in her own right) forces the anti-social Loretta out on a book tour.

To make matters worse, the academic Loretta is stuck doing the tour with the “ridiculous” cover model Alan, Alan, who always takes his shirt off.

With Alan’s popularity with the fans, Loretta’s awkwardness on stage in comparison turns to disaster (all while wearing a glittery purple onesie and high heels).

Meanwhile, Loretta fails to notice Alan’s interest in her, and after a fight, her latest book tour turns even more into an epic fail when the wealthy billionaire Abigail Fairfax (played hilariously by Daniel Radcliffe) kidnaps her.

RELATED: ‘Miss Fisher And The Crypt Of Tears’ Review – A Stylish Romantic Adventure

Fairfax needs Loretta’s help deciphering a clue to the lost city, the city she wrote about in her latest novel. After she refuses, he forcefully drags her to a remote Atlantic Island on a private jet to decipher the ancient map.

Thankfully, help, albeit not the help she’s expecting, is on the way.

Alan (who secretly likes Loretta) witnesses the kidnapping attempt and sets out to rescue her – much like the character he portrays on the cover of Loretta’s books.

BRAD PITT IN THE LOST CITY

With the expert help of an Ex-Navy Seal played by Brad Pitt and the unstoppable Beth, Alan has a plan to be Loretta’s hero. Too bad he’s standing next to Brad Pitt.

Without giving too much away, I can safely share that Brad Pitt’s cameo role may be the funniest section of the entire movie. During the rescue scene, the comparison between Jack Trainer (Brad Pitt) and Alan (who has no fighting skills) is hilarious.

Overall, The Lost City is all about the movie star power of its cast and Sandra Bullock’s physical comedy skills. No one can climb up a mountain in a purple onesie and heels like Bullock. It’s all reminiscent of her performance in Miss Congeniality!

Bullock’s physical comedy skills in this film are a reminder to other aspiring actors and filmmakers aiming to make a romantic comedy: You need to be funny, and you need to use physical comedy.

Learn from Bullock, learn from Lucille O’ Ball, and learn from Fran Drescher. Romantic comedies are good when they are witty and the main actors understand how to utilize physical comedy properly.

In this, Sandra Bullock is the queen. And I wish more rom-coms would realize the importance of comedic skill concerning casting and writing a funny script. A romantic comedy without comedy is just a romance, after all.

Ultimately (and surprisingly), the chemistry between Bullock’s Loretta and Tatum’s Dash works. Perhaps because both actors can simultaneously do romance and physical comedy. Their body language and movements sell it and give us the rom-com we’ve been waiting for.

And as this is Channing Tatum, we even get a swoony dance scene between the two. Naturally.

In short, if you’re looking for pure entertainment and a good love story with Indiana Jones action scenes, look no further than The Lost City.

While the script is imperfect, with perhaps too many writers on board, The Lost City is a welcome return to the big-screen rom-com. Is anyone else ready for the next romantic adventure? I know I am.

HOW TO WATCH THE LOST CITY

The Lost City released in theaters on March 25, 2022. And it is now available to stream and buy on DVD.

Currently (as of November 2022), you can stream the film on Paramount+ (the movie comes from Paramount Pictures), Prime Video, and Epix. You can also rent/buy it digitally.

Have you watched the new romantic comedy yet? Do you agree with our movie review of The Lost City? Let us know in the comments!

2 thoughts on “The Lost City Movie Review: The New Rom-Com is Funny and Fantastic”