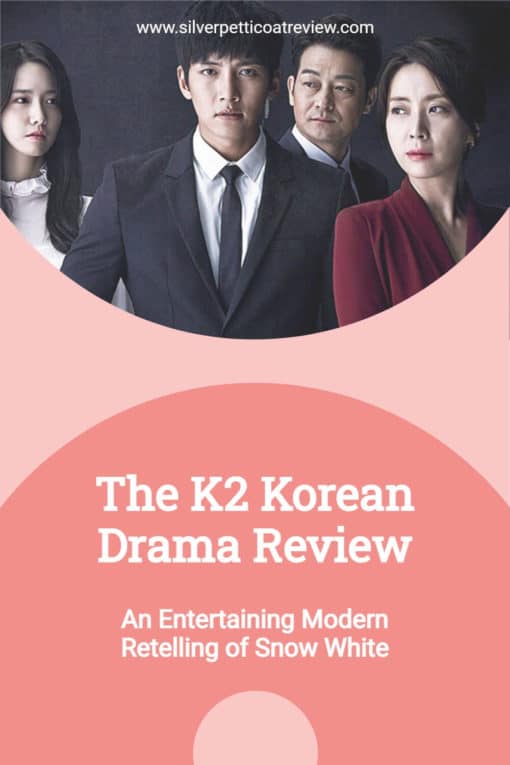 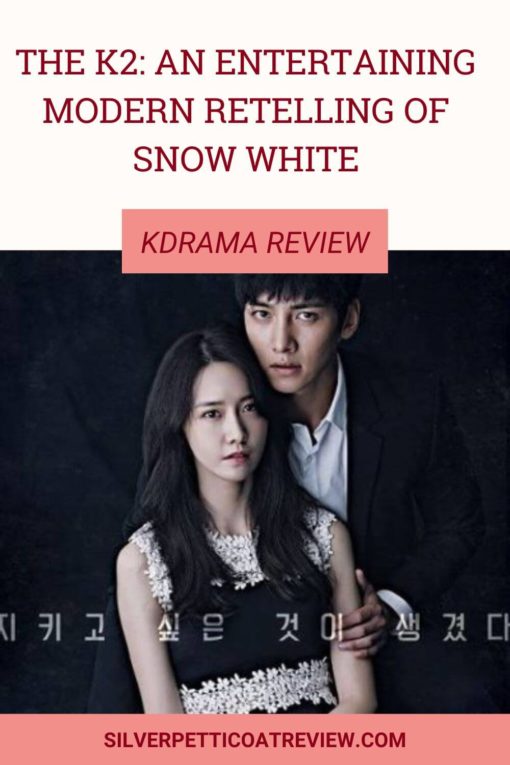 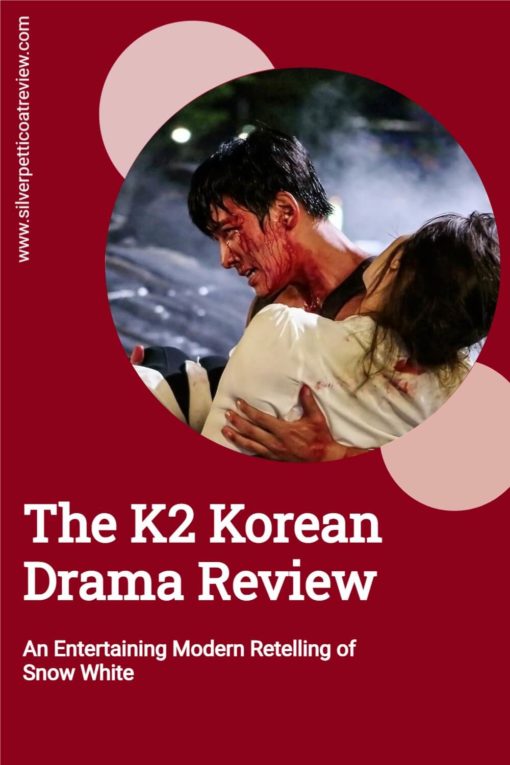 Part romantic drama, part political action thriller, part fairy tale, and part sci-fi, The K2 Korean Drama is a blast to watch despite some issues with the central romance.

In K2, Kim Je Ha is a mercenary soldier framed for a crime he didn’t commit. Known as K2, Je Ha seeks revenge with the help of the ruthless Choi Yoo Jin, the owner of JSS Security Company and the wife of Jang Se Joon, a presidential candidate.

The K2 mission in the series is for Je Ha to get to the truth and also get his revenge.

Soon, he must choose between his loyalty to the cutthroat first lady contender, Yoo Jin, or to his growing attraction to her stepdaughter, An Na. (This is Snow White, after all.)

The contemporary version of the story asks, what if the Evil Queen fell in love with the Huntsman, but the Huntsman fell for Snow White instead?

An entertaining premise: I appreciated the story and the brilliant characterization of Choi Yoo Jin as the wicked “queen,” a powerful and mysterious woman who runs her own company. But is she as evil as she seems?

On the surface, the series as a Snow White retelling isn’t the most obvious, but after minute observation, the similarities and clear comparisons rise. From the sci-fi twist on the “mirror” to the evil stepmother and even the Huntsman.

The main plot points are all there – even down to the wicked stepmother wanting her stepdaughter gone. Instead of royals, we have political leaders. It’s all rather clever.

Seriously, there’s even a cringe scene where Je Ha, a mercenary soldier, mind you, squeals while watching An Na make ramen. It may be the absolute worst romantic scene ever in a K-Drama or any drama.

While the main romance is, at times, painful, the show is still fascinating, thanks to the two main leads (and I’m not talking about the annoying Snow-White character An Na). Rather, K2 is all about Yoo Jin and Je Ha.

So, is Choi Yoo Jin in love with Je ha? Yes…even if he doesn’t love her back beyond an attraction.

THE MAGIC MIRROR WITH A SCI-FI TWIST

On a side note (and one of the exciting observations about this contemporary Snow White retelling) is the writers’ use of “The Mirror.”

I loved the version of the magic mirror in this retelling, a cool sci-fi invention called “The Mirror” that can spy on people with unique technology created by Yoo Jin.

The mirror is a smart twist on the fairy tale and would work well in an American remake. Think Snow White meets Person of Interest.

Overall, while the central romance is eye-rolling and frustrating and lacking some romantic drama instinct, watch for good action scenes, swoony chemistry between Yoo Jin and Je Ha, and a fabulous performance from Song Yoon Ah as the dynamic Choi Yoo Jin, the wife of a presidential candidate (or the “wicked queen”).

Where to Watch: Netflix and Viki. You can also buy it on DVD.

(Note: Below, for the romance rating, I gave it a three, but I would rate Je Ha and An Na a two. It’s only higher because the “queen” and the “huntsman” are so fabulous together onscreen.

If there is ever a remake of this show (and there should be), they should change the romance aspect to better suit the story.)

MORE ABOUT THE K2 KDRAMA

HOW MANY EPISODES OF THE K2 DRAMA?

Jang Hyuk-rin (Yong-pal) wrote the script with Kwak Jung-hwan directing. The action and story are creative and strong; however, the show would have ultimately been stronger by reworking the main love story.

Consider An Na’s bodyguards as the seven dwarfs in this Snow White retelling.

A fugitive soldier gets swept up in personal and political intrigue when he’s hired as a bodyguard for the family of a presidential candidate.

You can watch the political fairy tale on Netflix.

A fugitive searches for justice.

Kim Je Ha (Ji Chang Wook) is a former mercenary soldier known as “K2” who suddenly turns into a fugitive when he is wrongfully accused of killing his girlfriend while he is serving in Iraq. He finds his way back to Korea and gets a job as a bodyguard for Choi Yoo Jin (Song Yoon Ah), the owner of JSS Security and the wife of Jang Se Joon (Jo Sung Ha), who is running for president.

Je Ha uses his new job to plan his revenge on Park Kwan Soo (Kim Kap Soo), the leader of the current ruling party and Se Joon’s rival, whom Je Ha believes ordered the murder of his girlfriend.

When Je Ha is assigned to guard Go An Na (Yoona), the reclusive illegitimate daughter of Se Joon, they begin to develop feelings for each other. But what happens when the person who wants to harm An Na the most is Yoo Jin, Je Ha’s boss and revenge ally? Where will Je Ha’s loyalty lay?

You can see from the trailer that it’s an exciting KDrama with Ji Chang Wook (who did his own stunts) perfect in the lead role!

Have you seen The K2 Korean Drama? Do you agree with our review of The K2, or do you love the central romance? Discuss this in the comments below.