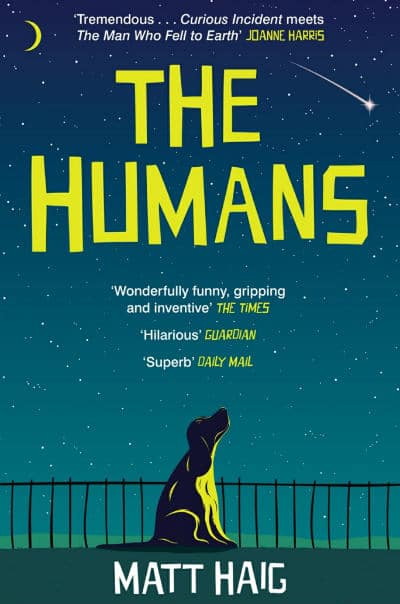 “I don’t want to tell you it is a book that features an alien in it, because you might not like books with aliens in it, and I don’t really. It is a love story and a murder story and a what-are-we-here-for? story. It is about humans. That is why I came up with the title. The Humans. See?” – Matt Haig, author of The Humans

Related Post: Living With The Dead: A Review of The Graveyard Book by Neil Gaiman

I have often heard people say that they would love to be able to read or watch something they loved as if they were experiencing it for the first time. However, there can be so much more gained from re-examining something you are already familiar with. Finding new meaning and pleasure in something one already knows, now that is something!

However, whether we enjoy something or not is usually not down to the item or act itself. In reality, it’s a matter of how we perceive it. Sherlock Holmes’ famous words: “you see, but you do not observe” emphasize the difference between seeing and actually seeing something expertly.

That is why it is a truly life-affirming experience to find a book like The Humans, where the protagonist is seeing and experiencing everything for the first time.

The Premise of The Humans by Matt Haig

You see, the main character of this novel is an alien sent to Earth from a distant planet to prevent the humans from advancing their knowledge and understanding of Math and Science beyond what they can handle. On a planet where Math is the closest thing to a deity and logic is adhered to above all, the emotional and unpredictable humans are not to be trusted. After all, these humans cannot even trust themselves, so why should the other planets’ inhabitants risk them making discoveries that could bring them further out into the cosmos and disrupt the calm and logical lifestyle of more intelligent creatures with their mood swings, illogical feelings, and unpredictable behaviour?

No, the proof of Riemann’s hypothesis must be destroyed! The first step in the mission was achieved by eliminating Professor Andrew Martin, the man who proved what was deemed impossible. An alien, in the guise of that same Andrew Martin, is then sent to Earth to clean up any traces that the proof existed and make certain that humans keep thinking that proving it is impossible.

In order to achieve this goal, he must get close to the real Andrew Martin’s wife, son, and friends. Eliminating any traces of the proof is imperative, whether these traces be files or people.

Learning to Notice Earth and its Beauty Anew

But, just as the author so eloquently stated, this is not a story about alien invasion, political intrigue, and shots being fired right and left. It’s a quiet and contemplative novel about a creature that sees Earth and its inhabitants for the first time. It’s a book about learning to be human and what it entails. Since this is a life-long process for all Earthly inhabitants, not just aliens, it’s a piece of writing that every human would benefit from.

“I was getting the context wrong. Everything here was about context. There was nothing that was right for every occasion. I didn’t get it.”

We get to experience what being human is like all over again through the alien’s eyes and see the quirkiness of our species from a different angle. The new Andrew Martin takes in experience after experience with an endless thirst to understand humankind. Slowly, his initial prejudices start wearing away and he finds beauty in things the way only children seem to be able to. This quiet joy in the little things emanates from him in invisible waves of energy and helps to bring him closer to Andrew’s wife and son. Before he realizes what is happening to him, he falls in love with his new family and learns the advantages that come with letting emotions run their course without rationalizing them.

Every little spark of emotion, the sight of a sprouting blade of grass are discoveries he marvels at like a child that is curious about everything and to whom the simple act of a walk is a grand adventure.

We often long for adventure but think it has to take place somewhere far away, preferably in another country. I too am guilty of such thoughts when, in reality, adventure is always at your doorstep if you choose to open your eyes to it and embrace it.

Nevertheless, being human isn’t always a walk in the park. Andrew Martin quickly finds out that all people appear to be under constant stress. He quickly deduces that this is because everything in human life is a test.

As I was reading this book, I found myself glad that I had the Kindle version. I managed to highlight sections of text on nearly every page of this thought-provoking novel. This is something I could not bring myself to do with a paperback. There are countless beautiful insights into life such as that “on Earth you have to spend a lot of time travelling in between places, be it on roads on rail-tracks or in careers or relationships,” in the text.

At circa 300 pages, this novel is on the short side, but every sentence has enormous meaning behind it. For such a short book, there is a surprising amount of content to it making it a book ideal for re-reading. I could spend hours thinking about many of the sentences in this novel.

An Alien’s Thoughts on Mad People

“Humans, as a rule, don’t like mad people unless they are good at painting, and only then once they are dead. But the definition of mad, on Earth, seems to be very unclear and inconsistent. What is perfectly sane in one era turns out to be insane in another. The earliest humans walked around naked with no problem. Certain humans, in humid rainforests mainly, still do so. So, we must conclude that madness is sometimes a question of time, and sometimes of postcode.

Basically, the key rule is, if you want to appear sane on Earth you have to be in the right place, wearing the right clothes, saying the right things, and only stepping on the right kind of grass.”

If you have ever visited one of the Cambridge colleges, you will know exactly why some grass must never be stepped on! Unless, of course, you are a professor there, in which case you can use it to make that quick getaway from your students and their incessant questions.

When I saw the news that Benedict Cumberbatch plans to both star in and executive produce Matt Haig’s latest novel on the author’s website, I couldn’t help imagining him playing the alien in The Humans. After all, he has already portrayed a Cambridge professor in Hawking, so he could pull it off with ease. Somebody like Lena Headey or Rachel Weisz would also be able to do justice to the role of Isobel, Andrew’s beautiful wife, with plenty of flair.

This story would work very well as a film in the right hands. It would serve as a love letter to the beauty of being human and as a quiet love story of a small family in Cambridge, England.

Content note: There are a handful of occasions where swear words are used, however, these are more scientific and not used with hurtful intentions on the part of the alien. The same goes for his observations on human intimacy.

Advice for a Human

As part of the promotion of his book, Matt Haig sent out a chapter and asked his readers to film themselves reading out their favourite parts. The result is this wonderful video. If you enjoy the advice in this chapter, you will definitely enjoy reading this book!

Humans: An A to Z – A User-Guide to the Strangest Species in the Universe 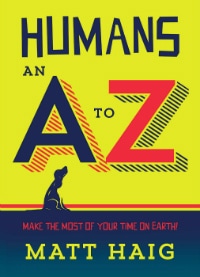 There is even a wonderfully insightful and laugh-out-loud funny dictionary written in the voice of the alien Andrew Martin. If I need a pick-me-up or affirmation that I am indeed human and alive, I just reach over and open the little user guide to the human race at a random page and read a few of the unusual, but surprisingly accurate, definitions in there.

anxiety – An inevitable result of thinking.

day – On Earth, a day is a very short period of time, but still long enough to fall in love

genius – A human who can resist every false map given to them by their family and formal education and find their own way.

tea – Hot drink made of dried leaves. Used, often with milk, in times of crisis as a means of restoring normality. See anxiety, leaf.

My personal advice, as one human to another, would be to read The Humans. It doesn’t have to be today or even tomorrow but, one day, when you feel like being human is sending you insane, you may greatly benefit from reading this book. It’s a book that I reach for when I feel darkness and gloom setting in. When life feels pointless and lifting a limb seems physically impossible. This book helps me change my perception of the world when being alive loses all meaning.

Have you read The Humans? What is your favourite piece of advice on being human from the book? If you have not read the book, what was the line from the video that resonated with you the most?

Our romance-themed entertainment site is on a mission to help you find the best period dramas, romance movies, TV shows, and books. Other topics include Jane Austen, Classic Hollywood, TV Couples, Fairy Tales, Romantic Living, Romanticism, and more. We’re damsels not in distress fighting for the all-new optimistic Romantic Revolution. Join us and subscribe. For more information, see our About, Old-Fashioned Romance 101, Modern Romanticism 101, and Romantic Living 101.
Pin this article to read later! And make sure to follow us on Pinterest.
By Yaroslavna Simdyankina on June 6th, 2017