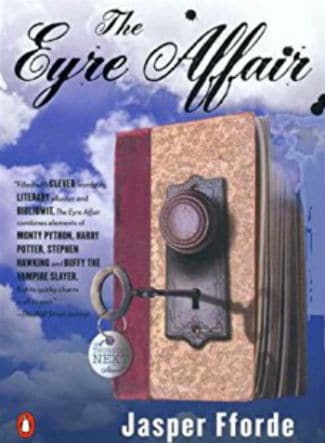 Some books are full of clever wordplay, literary references, and delightful characters. The first book in Jasper Fforde’s Thursday Next Series, The Eyre Affair, is one such book. The story is set in an alternative 1985 England and follows our plucky heroine Thursday Next. Thursday is a member of Special Operatives 27, the Literary Detective Division.

If you think this means that Thursday spends time hunting down lost manuscripts and protecting the books that we know and love, then you are correct. From tracking down a stolen original manuscript of Martin Chuzzlewit to saving Jane Eyre, the book is full of clever literary references. Fforde clearly loves to read and has created a book full of literature puns. It’s like The Phantom Tollbooth for adults.

In The Eyre Affair, our heroine faces both the villainous Acheron Hades and her own past. While in her hometown of Swindon, Thursday runs into her former love Landon. This reminds Thursday of how she used to feel about him and brings her old emotions to the surface.

Meanwhile, Thursday’s eccentric uncle Mycroft has created a machine that people can use to travel to the pages of their favorite books. Unfortunately, he and his technology are stolen. Soon, Jane Eyre is also kidnapped. When she learns that her family and Jane Eyre are in danger, Thursday springs into action. She is determined to save both her family and one of the most beloved books of all time, Jane Eyre.

Thursday also learns that she may have visited the Bronte Classic before, as a child. How is that possible? Can she save her family, Jane Eyre, and Jane Eyre? Will she and Landon get another chance at love? And what is Acheron Hades up to? Read The Eyre Affair to find out! 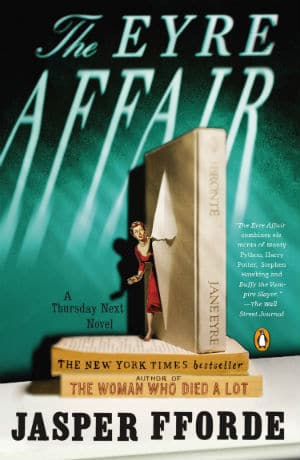 Because Fforde tells his story through Thursday’s eyes, as the book goes on we get a more complete picture of how her world works. Fforde creates a fantastic world where people trade in manuscripts and use time-travel to change history and literature. The world is engaging and funny, and the characters from Jane Eyre feel true to the spirit and style of Bronte’s work.

Thursday Next is a wonderful character. She’s a smart woman and a decorated veteran who knows when to use diplomacy and when to use force. Thursday also has strong opinions and fights for what she believes is right. She’s a wonderfully complex character who feels real. Even though we may never save Jane Eyre from an assassination attempt, Thursday’s struggles and dreams still manage to make her relatable.

The romances in The Eyre Affair are also wonderful. This book has both Jane Eyre and Persuasion. How much better could it get?  Thursday and Landon are like Anne and Wentworth, while Jane and Rochester are characters in the book. Their romance is a plot point and something they struggle with, especially because in the original, pre-Thursday version of Jane Eyre, things work out quite differently for the pair. Thursday’s feelings for Landon are also a major part of the plot, especially because she remembers why she left him in the first place.

The only problem with a film series adaptation of The Eyre Affair would be that I would need to hear or see all the dialogue and literary references. A big part of the appeal of this book is the wordplay, so that needs to be present in a film. When it comes to the screenplay, Jasper Fforde needs to be involved! I also wouldn’t want the Crimea-flashbacks to take up too much space in the film. The war is an important part of Thursday’s character, but it’s not the only main focus.

For casting, I imagine Thursday Next played by Felicity Jones, with Landon as Diego Luna. They might be a little young, but I think that they would still work well in these roles. Other casting ideas include Anthony Mackie as Spike, Michael Caine as Mycroft, Ben Barnes as Acheron Hades, and Jimmy Smits as Thursday’s father. I really want to see Chris Evans as Cable. Cable is a little dorky and nervous and I think that would be fun to see. Also, I would like to see the cast from one of the Jane Eyre movies as Jane and Company.

CONTENT WARNING: There is some serious swearing in several places, and the name of a villain is a play on words that sounds like a swear word. It’s clever, but be aware of that.

Our romance-themed entertainment site is on a mission to help you find the best period dramas, romance movies, TV shows, and books. Other topics include Jane Austen, Classic Hollywood, TV Couples, Fairy Tales, Romantic Living, Romanticism, and more. We’re damsels not in distress fighting for the all-new optimistic Romantic Revolution. Join us and subscribe. For more information, see our About, Old-Fashioned Romance 101, Modern Romanticism 101, and Romantic Living 101.
Pin this article to read later! And make sure to follow us on Pinterest.
By Bailey Cavender on April 7th, 2017

3 thoughts on “The Eyre Affair: Thursday Next and Literature with a Fun Twist”