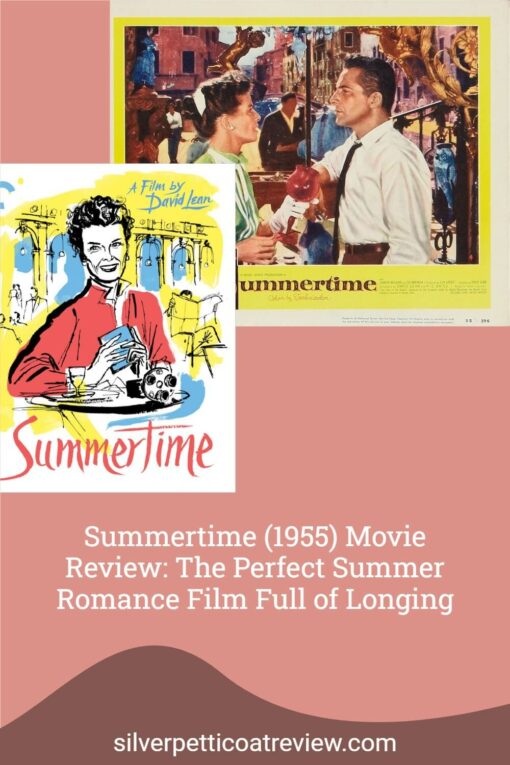 The Summertime movie (1955) is known for being David Lean’s personal favorite film of his. A movie he describes as being about “loneliness.”

The famous director’s filmography includes some of the greatest films of all time: Lawrence of Arabia, Doctor Zhivago, Bridge on the River Kwai, Oliver Twist, Brief Encounter, and A Passage to India. So, it’s surprising this overlooked gem meant the most to Lean.

But David Lean’s connection to the film makes Summertime even more intriguing to watch. Thankfully, Criterion recently restored the movie in all its grandeur.

RELATED: Vintage Film Review: Three Coins In The Fountain (1954) – Three Love Stories For The Price Of One

In July 2022, the Criterion Collection released a brand-new Blu-ray of the Summertime 1955 movie with exciting new features, including a new 4K digital restoration, interviews with David Lean, cinematographer Jack Hildyard, a film historian, and more.

In these special features, you learn more about the history of Summertime and how David Lean felt about the romantic drama.

He even bought an apartment in Venice afterward because he enjoyed his experience.

But when you watch the 1955 film for yourself, what you see is a stunning movie full of longing, an excellent performance from the always exquisite Katharine Hepburn (she received an Oscar nomination for her powerful performance), gorgeous cinematography, and an emotional love story that feels like a companion piece to David Lean’s previous film, Brief Encounter.

Overall, I felt watching Summertime was like stepping back in time to 1950s Venice, Italy, in magnificent Technicolor.

Now, before I jump more into my Summertime review, here is everything you need to know about it.

With this sublimely bittersweet tale of romantic longing, director David Lean left behind the British soundstage to capture in radiant Technicolor the sun-splashed glory of Venice at the height of summer.

In a tour de force of fearless vulnerability, Katharine Hepburn embodies the conflicting emotions that stir the heart of a lonely, middle-aged American tourist who is forced to confront her deep-seated insecurities when she is drawn into a seemingly impossible affair with a charming Italian shopkeeper (Rossano Brazzi) amid the ancient city’s canals and piazzas.

Lean’s personal favorite among his own films, Summertime is an exquisitely tender evocation of the magic and melancholy of a fleeting, not-quite-fairy-tale romance.

You can buy the Blu-ray here.

Katharine Hepburn stars as the middle-aged Ohio secretary Jane Hudson on a dream vacation in romantic Venice. She’s full of wonder for her new surroundings, letting us see Venice through her eyes as if she were seeing the splendor of the world.

And when she finds romance with an Italian shop owner, all her insecurities rise to the surface.

RELATED: The Top 5 Katharine Hepburn Lines To Use In Real Life

Rossano Brazzi stars as her love interest and antique shop owner, Renato De Rossi. He’s handsome, charming, the man of her dreams, and at times, enigmatic.

It’s easy to see why Hudson is drawn to Renato – even if he’s married (but separated) which puts a damper on his appeal.

Brazzi was a famous romantic leading man in Italy in the 1940s and even worked with the resistance during WWII. Eventually, he moved to Hollywood, Los Angeles, in 1949.

The holiday romance film is so beautiful it will make you want Venice as your next travel destination. Lean filmed most of the principal photography in Venice on location. So, what you see in the movie is very real.

He filmed much of the Summertime movie around the Piazza di San Marco (St. Mark’s Square) and De Rossi’s shop at Campo San Barnaba, a beautiful square in Venice. This location includes the famous scene when Hepburn falls into the canal.

According to the Lucas Italy website, the building still has a shop, but it sells toys – even if it is rarely open to the public.

Lean filmed the interior shots of the hotel in a studio; however, the scenes on the hotel’s veranda were filmed along the Venice Grand Canal.

Summertime is based on the play The Time of the Cuckoo by Arthur Laurents, adapted into a screenplay by David Lean and H.E. Bates (the famous English author of books like the Pop Larkin Series and My Uncle Silas).

Watching Summertime feels almost like stepping into a fairy tale – despite the bittersweet aspect of the romance. The cinematography of the picturesque Venice panorama is epic in scope, grand and gorgeous.

But the story itself is a simple one: Jane Hudson longs for love, something that has always eluded her, but when she finds it on the course of a hot summer day, there’s a catch: the man she falls for is married and unable to get a divorce despite their separation.

RELATED: 50 Of The Most Glamorous Old Hollywood Actresses

Ultimately, Jane’s morality and insecurities won’t let her completely give into the relationship for the rest of her life.

Brazzi matches her strength onscreen – proving he’s a charismatic romantic leading man. The rest of the performances are also top-notch, everyone playing their part magnificently.

Beyond the acting and cinematography, the script is strong, and David Lean’s directing is masterful.

David Lean’s Summertime is beautifully photographed and is an emotional love story that is fascinating to watch. Even if, like Jane Hudson, I couldn’t wholly accept the idea of an affair.

But it’s that grayness of the morality that makes for a compelling romance film here – especially with David Lean’s skilled directing, the intelligent script, and Hepburn giving one of her finest performances full of vulnerability and loneliness.

David Lean was undoubtedly the best director for this production.

Overall, Summertime is a love letter to Venice every classic romance fan should see. In the end, I’d be surprised if you left the film not wanting to visit (especially during the summer).

WHERE TO WATCH SUMMERTIME 1955

(Note: Availability is for the United States at the time of the review’s publication and is subject to change at any time.)

You can stream the movie on HBO Max, The Criterion Channel (they offer a free trial), and Kanopy. The classic film is also available to rent/buy on Digital and DVD/Blu-Ray.

I recommend watching the movie on Blu-ray if you can, but it’s not essential.

Have you seen the Summertime movie? What did you think? Let me know in the comments!