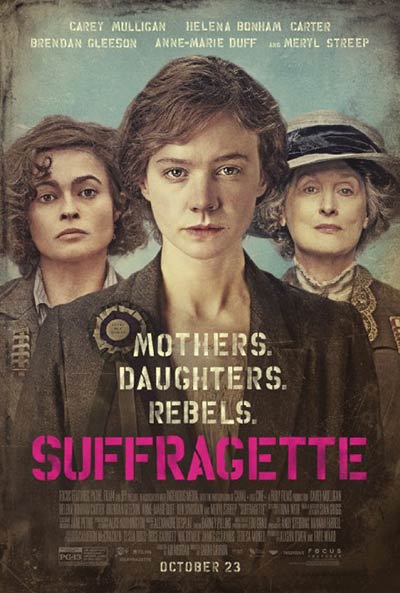 Suffragette is a period drama that tells a fictionalized story about the suffragettes, women who fought for the rights of women in England, including the right to vote. In order to tell the story, screenwriter Abi Morgan (from the powerful TV Series The Hour), created a fictional character to place in the historical events of 1912 and 1913. It is in this gripping and depressing story of Maud Watts (Carey Mulligan) that we are immersed into their terrifying world.

Through her eyes, the audience witnesses firsthand how terrible it was to live as a working class woman. Maud Watts has no choice but to live as a laundress. She’s married, has a child, and spends her entire day just working under horrible and dangerous conditions. Her boss is also a creepy rapist (he likes the young girls), a fact that no one much cares about. Maud’s mother died when she was four because of the harsh working conditions, and Maud herself already carries burns on her body. It is barely a life at all, especially since she has absolutely no rights. With no rights, Maud begins to truly open her eyes as she slowly becomes submerged in the women’s suffrage movement.

Witnessing firsthand one of the violent protests of the Suffragettes (windows being smashed by rocks), a curiosity into this world begins when she sees someone she knows at the protest. Soon, Violet (Anne-Marie Duff) does some recruiting of her friend and the words of people like the wealthier Alice (Romola Garai) and pharmacist Edith (Helena Bonham Carter) begin to affect Maud’s opinions.

Maud’s transformation into a suffragette, one that begins to believe violence is their final option to actually get anywhere in the movement after 50 years of peaceful protests, is a believable one (though I’ve read a couple of absurd reviews that describe Maud as a “thin” character). Her struggle for equality and dignity is heartbreaking and sometimes difficult to watch because what happens to her is so dreadful, such as her child getting taken away from her because mothers had no rights then.

Carey Mulligan gives quite the layered performance here, making Maud’s journey from working class woman to a foot soldier in the movement feel real and authentic. Maud could have been many of the women of the past, fighting through hunger strikes in prison or walking the streets of the historical funeral of Suffragette Emily Wilding Davison (one true event that takes place in the film).

While some scenes will be difficult to watch, due to the gritty realism, I appreciated the power behind the script, performances from the whole cast, and the strong directing from Sarah Gavron. Everything about Suffragette worked because I honestly felt like I was there. All of the women in this were in top form (including Meryl Streep who makes a brief appearance as the real life leader Emmeline Pankhurst).

While much can be said about the female performances, the male actors were also powerful. Ben Whishaw, in particular, was phenomenal. He plays Maud’s husband that turns against her when she becomes a Suffragette. Whishaw could have played his character one-dimensionally, but that wasn’t the case. While still hard to like based on his choices (such as giving their child away), we see this working class man also trapped by the system. He too is broken.

Suffragette is also more than just a history lesson, but a metaphor for the inequality still going on today, which makes the film relevant to modern audiences. While the case can be made for various causes (you can interpret this as you will), I couldn’t help but think of Hollywood when it comes to women, as in they still do not get equal treatment. If seen as a metaphor, you could possibly see a few powerful, Hollywood men terrified of women in the industry stepping up to assert their rights as one-half of the population, a population that still gets paid less than the men (this point was made in the movie). Suffragette was both directed and written by a woman after all and reminds us that female movies are a force to be reckoned with just like the suffragettes of old. Of course, these points directly relate to more than just Hollywood but working women everywhere.

Overall, if you love inspirational historical dramas, Suffragette is an intense, yet brilliant film you should see while still in theaters. With limited distribution, make sure to check your local listings (it finally just came to my town) and support a movie that reminds us of the women who fought for the freedoms we have today.

What do you think of Suffragette? Will you be seeing this in theaters? Sound off below…

Our romance-themed entertainment site is on a mission to help you find the best period dramas, romance movies, TV shows, and books. Other topics include Jane Austen, Classic Hollywood, TV Couples, Fairy Tales, Romantic Living, Romanticism, and more. We’re damsels not in distress fighting for the all-new optimistic Romantic Revolution. Join us and subscribe. For more information, see our About, Old-Fashioned Romance 101, Modern Romanticism 101, and Romantic Living 101.
Pin this article to read later! And make sure to follow us on Pinterest.
By Autumn Topping on November 21st, 2015