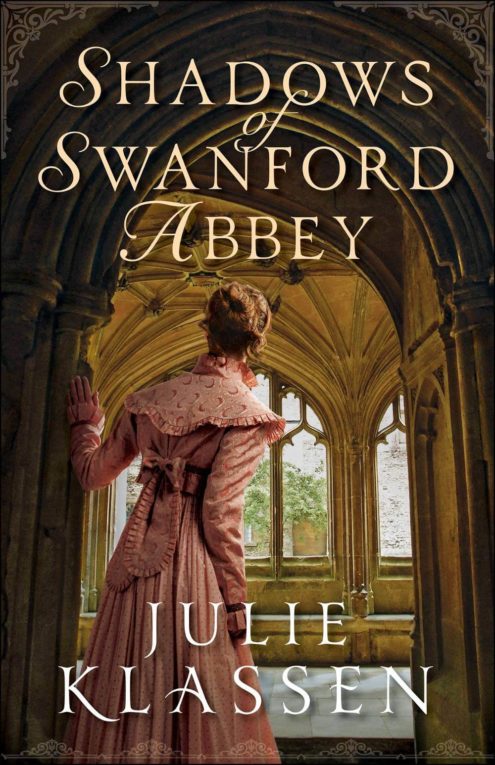 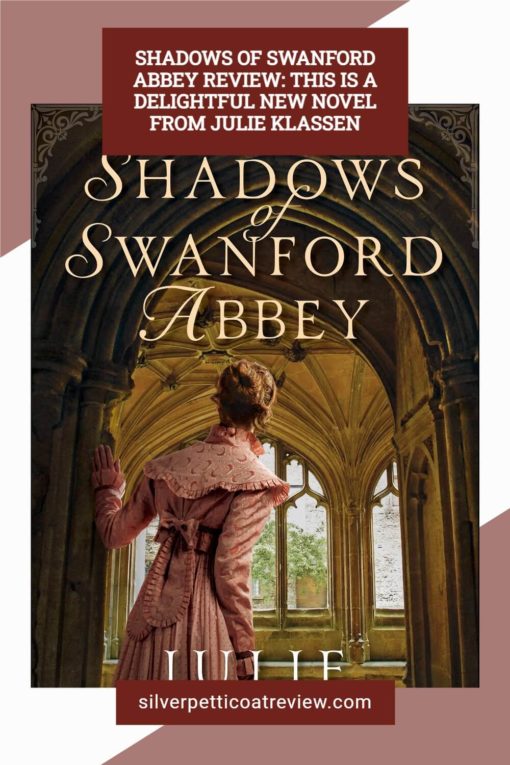 Disclosure: I received a free copy of Shadows of Swanford Abbey from the publisher via NetGalley. All opinions in the book review are my own.

When Miss Rebecca Lane returns to her home village after a few years away, her brother begs for a favor: go to nearby Swanford Abbey and deliver his manuscript to an author staying there who could help him get published. Feeling responsible for her brother’s desperate state, she reluctantly agrees.

The medieval monastery turned grand hotel is rumored to be haunted. Once there, Rebecca begins noticing strange things, including a figure in a hooded black gown gliding silently through the abbey’s cloisters. For all its renovations and veneer of luxury, the ancient foundations seem to echo with whispers of the past–including her own. For there she encounters Sir Frederick—magistrate, widower, and former neighbor—who long ago broke her heart.

When the famous author is found murdered in the abbey, Sir Frederick begins questioning staff and guests and quickly discovers that several people held grudges against the man, including Miss Lane and her brother. Haunted by a painful betrayal in his past, Sir Frederick searches for answers but is torn between his growing feelings for Rebecca and his pursuit of the truth. For Miss Lane is clearly hiding something…

Julie Klassen’s latest Regency Romance novel is fabulous and fun! If you were to take elements of Jane Austen, Agatha Christie, Charlotte Bronte, Elizabeth Gaskell, and Charles Dickens, you’d discover this intriguing read full of romance, mystery, suspense, and perhaps even a ghost!

It’s the type of book you can’t put down and simply must finish as soon as possible – if only to discover the “who” in the whodunit murder mystery and to get to more swoony moments between the likable heroine and the Darcy-like hero.

Klassen delights with a historical Agatha Christie-like mystery and a Regency Romance between a lady’s companion, Rebecca Lane, and her former childhood crush, Sir Frederick, a wealthy Mr. Darcy-like hero in his thirties.

When Miss Lane returns to her home village, she discovers her brother, John, in mental turmoil, struggling to make it as an author.

He asks her for an impossible favor – to stay at Swanford Abbey (a medieval monastery transformed into a grand hotel) and bring his latest manuscript to the famous author staying there. All in the hopes of getting published – even though the author is a cruel, selfish, and horrible man that stole her brother’s novel in the past for his own gain.

But she wants to help her tormented brother, so she does what he asks.

Once there, Rebecca crosses paths with Sir Frederick, the man she loved as a girl. He was a bit older than her, and while they were close, he only saw her as a teenage girl rather than a woman. He ultimately chose another beautiful and charming woman, leaving Rebecca behind and breaking her heart.

Now a widower and a magistrate, the two meet in entirely new circumstances, reawakening her adolescent feelings and perhaps stirring some new emotions within his own heart.

The pair once again become close, only for the murder of the famous author to shake things up – adding a good amount of suspense into the page-turning tale.

What I loved about Shadows of Swanford Abbey is just how much it reminds me of my favorite authors. It has a Jane Austen-esque love story, an Agatha Christie-esque murder, a ghost-like apparition of a nun – similar to the one in Bronte’s Villette, plus elements of a Dickens story or even Gaskell’s North and South.

If you love all those authors and stories as much as I do, then this is the book for you! While Klassen pays homage to these authors in various ways, the story is wholly original and not just a copy.

Klassen’s powerful prose and storytelling abilities kept me hooked from start to finish. Some parts even reminded me of Downton Abbey and Grand Hotel!

Now, if you don’t typically read inspirational fiction, a few moral judgments and religious quotes appear here and there, but it’s realistic to the characters of that time and not overly preachy. So, don’t let that deter you from a brilliant, entertaining read if the inspirational genre is not typically your cup of tea.

In the story, Klassen builds on Rebecca Lane’s unrequited love from her teenage years and develops it into a mature love story. I found myself rooting for these two intelligent kindred spirits and hoping for an Austen-like happily ever after. Every moment shared between them was tense and filled with the right amount of chemistry.

Ultimately, the romance story is both satisfying and enjoyable to read.

Numerous interesting characters besides Rebecca and Sir Frederick fill the story with rich characterization and a strong suspect pool. And I enjoyed reading about each of them.

Overall, if you’re a fan of Austen and Christie, or have even read Julie Klassen’s previous bestselling novels, then you’ll love her latest book. It really is an absolute lighthearted treat I can’t recommend enough.

Shadows of Swanford Abbey would make a lovely period drama film with familiar British actors and a clever script. It has all the perfect elements to be a hit.

Content Note: The romance is completely wholesome, while the murder mystery and gothic elements give it a PG feel.

(NOTE: In a funny aside, the character of Rebecca Lane shares the same name as our friend and original Silver Petticoat co-founder, Rebecca Lane! Well, we three shared a good giggle!)

Have you read Julie Klassen’s novels before? What is your favorite? Do you plan to check out Shadows of Swanford Abbey? If you’ve read it, do you agree with our review? Discuss in the comments below!

Want to find out even more about the book? Check out Author Julie Klassen’s recent YouTube video! She shares her inspiration for Shadows of Swanford Abbey!

Julie Klassen loves all things Jane—Jane Eyre and Jane Austen. Her books have sold over a million copies, and she is a three-time recipient of the Christy Award for Historical Romance. The Secret of Pembrooke Park was honored with the Minnesota Book Award for Genre Fiction. Julie has also won the Midwest Book Award and Christian Retailing’s BEST Award and has been a finalist in the RITA and Carol Awards. A graduate of the University of Illinois, Julie worked in publishing for sixteen years and now writes full time. She and her husband have two sons and live in a suburb of St. Paul, Minnesota.

2 thoughts on “‘Shadows of Swanford Abbey’ Review: This is a Delightful New Novel from Julie Klassen”