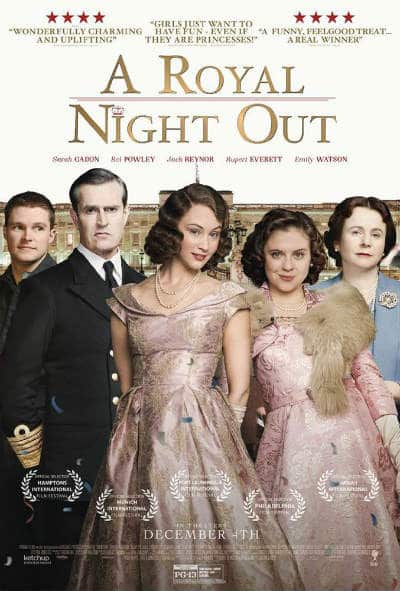 A ROYAL NIGHT OUT FILM REVIEW

A Royal Night Out is a lesser known period drama that comes from the team that brought us the incredibly romantic film, Becoming Jane (2007). In a similar fashion, Director Julian Jarrold and writers Trevor de Silva and Kevin Hood, bring us a “what if” scenario with Queen Elizabeth II – another figure of great interest. While not as dynamic or as swoony-worthily romantic as Becoming Jane, A Royal Night Out is a clever, engaging romantic comedy made in the style of the films of yesteryear. And that is one of the best compliments I can give this period dramedy.

A Royal Night Out tells the story of the young Princesses Elizabeth (Sarah Gadon) and Margaret (Bel Powley) on V.E. day in 1945. The two sisters long to go out and join the celebrations in London despite their parents’ refusals. After some pleading, the King (Rupert Everett) ultimately gives into his daughters’ wishes and allows them to go out – with supervision, of course.

As they go to the “expected,” proper party, the two quickly lose their escorts and go out on the town for some real fun. However, the two sisters separate, leaving Elizabeth to wander the city alone in search of her much wilder sister. And with no street skills whatsoever she finds herself in a few troublesome scenarios.

Thankfully, she crosses paths with Jack Hodges (Jack Reynor), an airman left shaken from the aftermath of the war who decides to help her. The two go on some crazy adventures together only to develop romantic feelings for each other. But with Elizabeth being a princess with a destiny, will she be able to act on her feelings? 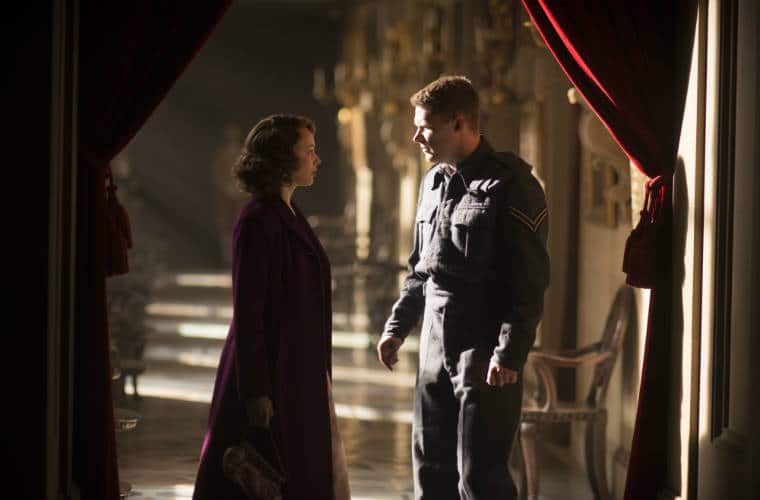 A Royal Night Out is part comedy, part drama, but above all else, it is a romance. And a lovely old-fashioned one at that. Inspired by the romantic comedies of the past, the humor relies on situational humor as well as clever witticisms rather than vulgarity and crudeness (not that there isn’t some risqué behavior on the part of other characters). There is some sweet banter between Jack and Elizabeth that will have you rooting for them. And the two actors have a likable, believable chemistry that works onscreen which makes it all the better. Yet, anyone familiar with history will know that this isn’t a story with a romantic happily ever after between the two leads. And it never tries to be. Still, you leave the film satisfied with the resolution.

Overall, this isn’t an “epic” romance by any means. But it’s a cute one and a whole lot of fun to watch. If you love romantic films like Roman Holiday or period dramas, then you should enjoy this entertaining escapist fairy tale.

A Royal Night Out is available to watch on Netflix and to rent on Amazon. You can also buy the film on DVD.

CONTENT NOTE: This is rated PG-13 for some innuendo, brief nudity, and sensuality.

Have you seen A Royal Night Out? What did you think of this period romantic comedy? Let me know in the comments!

Our romance-themed entertainment site is on a mission to help you find the best period dramas, romance movies, TV shows, and books. Other topics include Jane Austen, Classic Hollywood, TV Couples, Fairy Tales, Romantic Living, Romanticism, and more. We’re damsels not in distress fighting for the all-new optimistic Romantic Revolution. Join us and subscribe. For more information, see our About, Old-Fashioned Romance 101, Modern Romanticism 101, and Romantic Living 101.
Pin this article to read later! And make sure to follow us on Pinterest.
By Amber Topping on October 17th, 2016