Roswell, New Mexico has the potential to be so much better. Unfortunately, the Pilot episode fails to be as immersive as the 1999 TV Series that premiered almost twenty years ago. However, as a Roswell fan who remembers the Tabasco days and campaigns for more seasons (I even held Roswell parties with my friends), I was ready to let Roswell back into my life. And, while I would have preferred a continuation with the original cast, I was at least open to a new adaptation.

Roswell and Roswell, New Mexico were both adapted from the Roswell High books after all. I mean, I have room for several versions of Jane Eyre, so why not more room for Max and Liz in my heart? But, much like the mediocre new Charmed Pilot, Roswell, New Mexico fails in almost every comparison. There was just something missing. The magic. The passion. The humor. The suspense. The emotional writing that once so beautifully captured the heart of these still beloved characters. 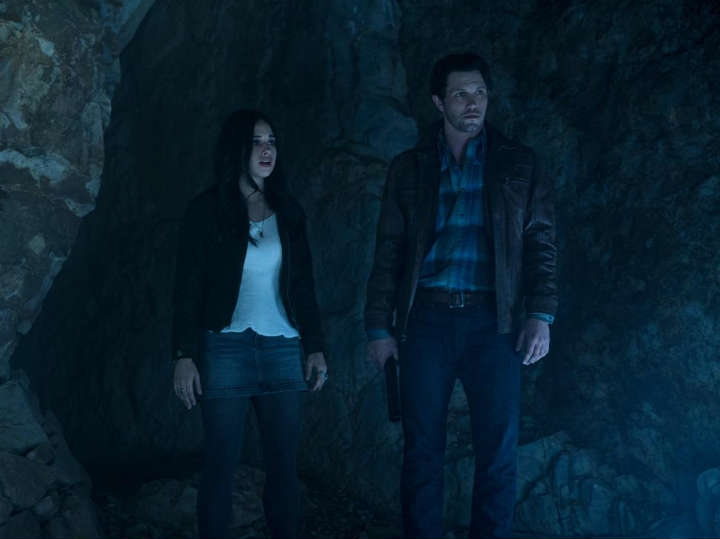 Similar to the 1999 series, Roswell, New Mexico tells the star-crossed paranormal romance between Max and Liz. Max, an alien, and Liz, a human. However, there are two huge differences. One: Liz Parker is now Liz Ortecho like the Roswell High books rather than show. Two: They are no longer in high school!

Instead, the show follows the lives of Max and Liz ten years later, all with a modern political twist. And I mean that literally. While these changes sound good on the surface (I think it was smart to give Liz her real name from the books and to make them older), the political commentary hits with a sledgehammer and may turn off some viewers. Personally, I think subtlety can go a long way in making a point. Plus, in a paranormal romance, I’m not sure the targeted audience is as invested in polarizing politics. At least not when they’re seeking out romantic escapism.

In Roswell, New Mexico, Liz returns home to New Mexico after losing her biomedical funding for a project (defunded to pay for a wall). Soon, she crosses paths with Max Evans, a guy she knew and crushed on in high school. While Liz thinks the cop was pulling her over because she was Latina, she realizes otherwise when she sees Max, now a small town cop, for the first time in years. There are stares and longing. And Max definitely has some serious brooding going on.

Max believes she’s there for the high school reunion but that wasn’t her intention. You see, Liz hasn’t come back much since her sister Rosa died from a supposed drug accident ten years earlier. Everyone still blames Rosa and her family for two other involved deaths. Not to mention, that there’s underlying racism against Liz’s Mexican family. Roswell is one of the last places she wants to be. Still, when she gets home, her father’s short-staffed for the night at the Crashdown Cafe, so Liz fills in as a waitress.

Max returns to warn Liz about her broken light (which is why he pulled her over in the first place). He’s also still completely in love with her. (Nathan Parsons has the longing romantic stares down to an art form.) Soon, shots go off through the window of the unsuspenseful, empty Crashdown, and Liz is shot by an unknown. Max can’t help himself. He has to save her! But in doing so, he reveals his supernatural healing abilities to no witnesses at all. Not even Liz who’s unconscious.

Still, Liz being a scientist investigates, especially after a mysterious handprint shows up in the same spot Max healed her. Max has no choice but to tell Liz his story. And in doing so, tells the story of his sister Isabel and friend Michael. All three crashed in the 1947 UFO crash and remained dormant in alien pods until 1997. From that point on, the three children learned to adapt as humans and kept their identities as aliens and abilities secret so as to not become test subjects by the government.

Meanwhile, Isabel and Michael are unhappy with the new developments. They don’t want anyone in on their secret, let alone Liz. Plus, they have a secret of their own, one that connects to Liz’s sister Rosa (because the writers NEEDED unnecessary secrets and angst). As for Liz’s ex, Kyle Valenti, he sees the mark on Liz and begins his own alien investigation (the ONLY clue to aliens mind you – so a bit of a letdown), unveiling a secret group that believes dangerous aliens came down with the crash of ’47. It should also be noted that Sheriff Valenti is now Kyle’s mother, however, she has thus far not been involved in suspecting Max Evans. Hopefully, she has something to actually do in future episodes… 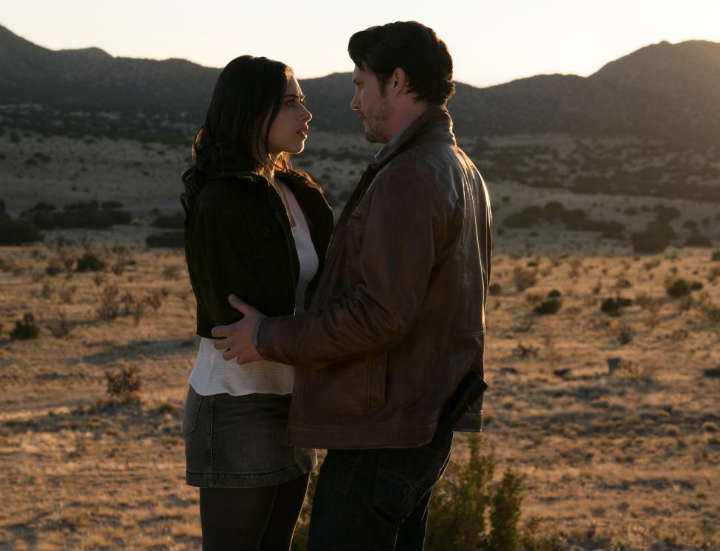 Roswell has and will always be a paranormal romance. At the forefront is the love story between Max and Liz. Here, is where the new show shines the most. While I don’t love Jeanine Mason as Liz Ortecho, I’m absolutely in love with Nathan Parsons as Max Evans. He sells and oozes passion and romance. He broods with the best of them. And, I believe Max is a good, small-town guy who wants to help people. As a whole, Nathan Parsons carries what would be a mediocre show.

For instance, when Max lets Liz into his memories, he reveals to her and to us the depth of this love. We feel it. And we believe his every word. This is a man who will not be swayed in love. He’s always loved Liz Ortecho. Ten years later, he still loves Liz Ortecho. The fact that he couldn’t let her die is all the more romantic. So, if you love paranormal romance, watch for him. The Originals fans will know why this part really embodies the actor.

Then there are the other romances. First of all, the love story between Alex and Isabel from the books and the previous show is dropped. Here, I’m not even sure if Alex is friends with Maria and Liz?? In this version, Alex is a wounded veteran and gay while Isabel is married to an unknown man she’s dominating in the bedroom. The second reveal of the episode is that the Michael and Maria epic romance has seemingly been dropped. Instead, the writers decided to pair up bad boy Michael with Alex.

I don’t know about other Roswell fans but this is a terrifyingly awful travesty. One of the BEST parts of the entire show was the banter between Michael and Maria. Imagine if Mr. Bingley had a romantic affair with bad boy Wickham and this is what you get. The writers could have explored sexuality with different or new characters. Or even with Kyle and Alex. But dropping Michael and Maria (arguably the most popular couple of the previous series) makes little sense.

As for the new and dullsville Maria, she has nothing to do but be a bartender friend, tell a useless fortune, and dance with Liz at the reunion. No humor at all. If you re-watch the old Roswell, you’ll recognize just what a loss this actually is to the new show.

Look, Roswell, New Mexico isn’t a complete failure. The cinematography of New Mexico is absolutely gorgeous for one thing. Furthermore, coming from The Vampire Diaries family of writers (Julie Plec also directs the Pilot) there is an entertainment factor to the show. And, as I said before, Nathan Parsons as Max Evans is about as perfect as he can be in a muddled script. You will easily fall in love with him and even the Max and Liz romance despite a sometimes over the top Liz.

It should also be noted that none of the characters have the chemistry and dynamic the original cast had pretty much instantly. No magic. Nothing. There’s an absence of intense feeling and connection. I don’t feel the closeness between Max, Isabel, or Michael. I don’t even feel the best friend connection between Maria and Liz. It’s like they barely kept in touch the past ten years. The female friendship in the prior show also sold the series to me. I loved the trust and the honesty between friends. There’s nothing of that here, Maria barely an echo of the previous version of the character.

RELATED | THE TOP SIXTEEN DRAMAS THAT AIRED ON THE WB

The writing itself also lacks layers, characterization, mystery (no Sheriff Valenti investigating with actual CLUES) and depth in comparison. I mean, yeah. The original Roswell had the amazing emotional writer Jason Katims running the series. He knows how to pen a script. Then, there was Ronald D. Moore of Battlestar Galactica and Outlander fame who would later write the sci-fi aspects of the show. Everything, except for some season 3 detours, worked beautifully because the series had swoon-worthy romances, epic sci-fi, believable human emotion, and undeniable chemistry with the entire ensemble.

The new show didn’t have much chance of living up to it. While the original Roswell pilot grades an A in my book. This series is an objective C. That all being said, I hope the series improves. Charmed did. I hope the writers return to the magic of Michael and Maria (the writers have said Michael is actually bisexual so there’s a chance). And I hope that Liz (aka the writers) tone down the political commentary. In the setting and present-day time, some political commentary makes sense.  But again, a little more subtlety would help improve the writing. In all, give us more characterization for the entire ensemble, give us some real sci-fi, and bring back the magic that was Roswell. Even a little Tabasco sauce would be nice…

What did you think of Roswell, New Mexico? Were you disappointed as I was? Do you like Nathan Parsons as the new Max Evans? Sound off below…

Our romance-themed entertainment site is on a mission to help you find the best period dramas, romance movies, TV shows, and books. Other topics include Jane Austen, Classic Hollywood, TV Couples, Fairy Tales, Romantic Living, Romanticism, and more. We’re damsels not in distress fighting for the all-new optimistic Romantic Revolution. Join us and subscribe. For more information, see our About, Old-Fashioned Romance 101, Modern Romanticism 101, and Romantic Living 101.
Pin this article to read later! And make sure to follow us on Pinterest.
By Autumn Topping on January 18th, 2019

8 thoughts on “Roswell, New Mexico: A Political Reboot That Lacks the Magic of the Original”