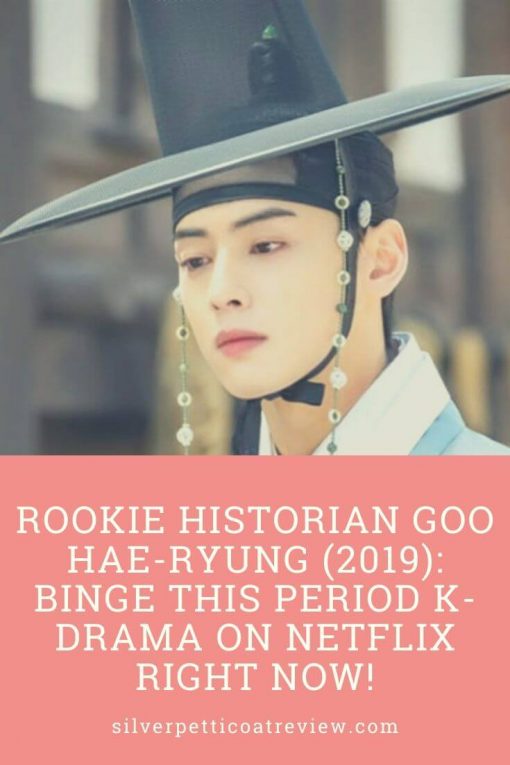 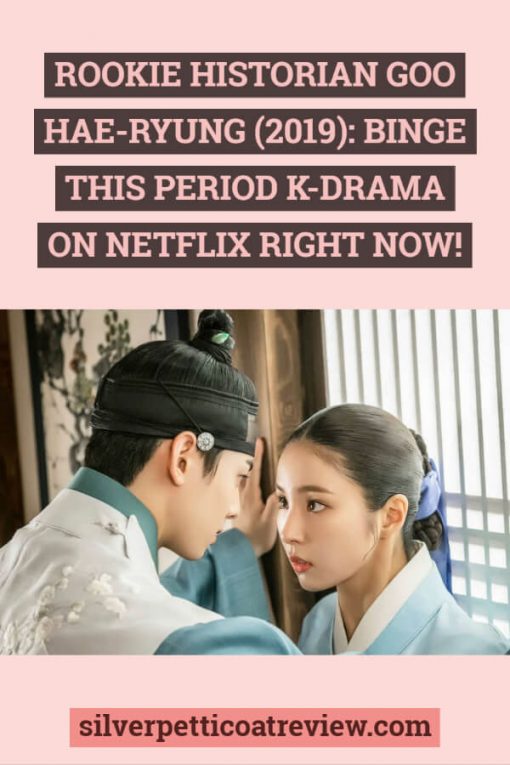 If you have a thing for flouncy pastel robes, angel-faced romantics, plucky heroines, allegorical tales, period dramas, royal doings, Rookie Historian Goo Hae-Ryung is the show for you.

Rookie Historian Goo Hae-Ryung has been popping up on my Netflix screen for months now, a recommendation based on some algorithm that has been analyzing my viewing habits. And I’ve been ignoring the prompts, thinking the title was strange, and it just wasn’t my cup of tea. Algorithms don’t know everything, I told myself.

Boy, was I wrong.

She is a pioneering woman who enters the male-dominated realm of palace bureaucracy, training as a historian/archivist. She faces harassment, sexism, prejudice, internal conflicts, corruption, moral quandaries, and forbidden love. Her morals and principles tested again and again.

And you cannot help but draw some allegorical parallels to our day with regards to freedom of the press, fake news, censorship, the search for truth, education, democratic systems, isolationism. But I’m getting ahead of myself.

A Woman in a Man’s World

Goo Hae-Ryung (Shin Se-kyung) is a 26-year-old woman, an avid reader, feisty, independent, scrappy. Her guardian is her older brother, who has yet to marry her off, much to her pleasure.

Indeed, she is not interested in marriage. She longs to do more with her life, be more, than the prescribed role for her gender and her gentrified status. But there are not a lot of options open to her.

Until the king opens up historian positions for women at the palace, the whole reason for opening up the job to women is to gain formal access to the dowager queen’s inner circle, to get potential spies in the inner royal circles. Such are the devious plans by some power-hungry ministers.

It doesn’t quite play out as they planned. As to why they want access to the dowager queen, well, that’s pretty much the whole series. That old, wily ex-queen is up to something.

Hae-Ryung, along with three other women, becomes the first female historians-in-training. Naturally, this places them all in a very vulnerable position, hated by bureaucrats, courtesans, and their fellow male historians alike.

So, they have to prove their worth again and again, fighting systematic sexism and hazing rites, navigating internal power struggles and palace politics. All the while trying to remain impartial recorders of history as it happens.

They dig in and do their work and do it well, and darned if they don’t start gaining the respect of their peers.

Hae-Ryung is assigned to be the personal historian of the royal outcast, Prince Dowon Yi Rim (Cha Eun-woo). Prince Dowon has essentially been held in a gilded cage his entire life, coddled, yet despised by the king.

He is a gentle, gentle soul, very sensitive and emotional, effusive with his feelings, a dreamer. Okay, a bit wimpy at times. He writes bestselling romance novels under the pseudonym Maehwa. Reading and writing are his escape. Others keep him in a perpetual childhood, never granting him adult duties, never training him for leadership.

The prince languishes and longs for something more, a life outside the stifling palace walls—freedom from the fate of his birth.

So, our scrappy, can-do heroine, always ready with a sardonic reply to mask her feelings, meets the effeminate beauty and sensitive goodness of the honest, naïve prince.

Indeed, Prince Dowon speaks the truth. In a world of intrigues, he speaks the truth, seemingly uncomprehending of political playbooks. This behavior makes him dangerous to the jostling powerbrokers.

RELATED: THE PRINCESS AND THE MATCHMAKER: THIS IS A SWASHBUCKLING TALE OF ROMANTIC SUSPENSE

Not to mention, emotionally dangerous to Hae-Ryung – because there’s nothing like a noble, innocent romantic, who speaks truth to power, to get under the skin of a jaded, sensible, principled woman.

That and the fact that Prince Dowon is so darn pretty. Seriously, soooo darn pretty. The man has the face of an angel, beatific in its illumination. You can’t stop looking at him. He is really the sweetest thing, and that smile is infectious. And his voice is so soothingly modulated (the actor Cha Eun-woo is a singer). You can listen to him for twenty, bingeing hours in a row…

The central mystery of Rookie Historian Goo Hae-Ryung centers around a banned book, The History of Ho Dam. Just why that book is banned, who Ho Dam is/was, and what all this has to do with not only the lonely Prince Dowon’s past but even our plucky heroine’s, is the storyline of Rookie Historian.

Rookie Historian Goo Hae-Ryung is a fun series, a feast for the senses, and a learning experience about foreign customs. It is full of flouncy pastel robes (mostly worn by our effeminate prince), lots of character development and growth.

Yes, indeed, our innocent prince gets a wee bit more jaded and sadder as he enters the world and gets knocked about more. And bristly Hae-Ryung might just let her guard drop now and again, allowing a certain pretty prince to get closer to her.

There are intensely romantic moments and great chemistry between our leads. There’s an expansive cast of supporting characters, all well acted. It’s funny, with just the right amount of farcical, over-the-top, quirky bits, which balance the more hard-hitting emotional moments.

Yes, Rookie Historian Goo Hae-Ryung hits a balance that is just right. The algorithm was right all along.

So, if you have a thing for flouncy pastel robes, angel-faced romantics, plucky heroines, allegorical tales, period dramas, royal doings, Rookie Historian Goo Hae-Ryung is the show for you. Binge it now!