The Princess and the Matchmaker (2018) Film Review

(I received a free screening of this film to write an honest review on The Silver Petticoat Review. I was not financially compensated for this post and all opinions are my own.)

The Princess and the Matchmaker is part melodrama, part romantic comedy, but mostly it reminds me of a less Gothic version of a novel Catherine Morland would devour in Northanger Abbey. It’s a swashbuckling romance with a princess in distress (overdramatic rescues included) and threatening men of bad character who want to marry her to gain access to the throne. And while “mostly” a cute film, there’s some unnecessary violence and confusion sprinkled throughout that muddles the overall quality. Still, it’s an amusing movie to watch, if like me, you enjoy absurd sensation stories of romantic suspense. 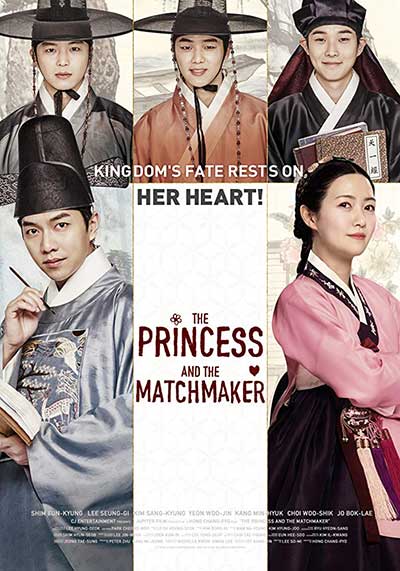 In a kingdom ruled by astrology and fortune-telling, the King decides to marry off his daughter to create a balance between yin and yang in order to end the devastating drought. Princess Songhwa (Shim Eun-Kyung) happens to be “cursed” with bad luck so men never wanted to be with her before. But now, with the promise of a royal title, men throughout the kingdom vie to be a final candidate to win her hand in marriage.

However, this princess has plans of her own, as she longs to find romance on her own terms. She disguises herself to meet the final candidates, only to fall in love with the Matchmaker (Lee Seung-Gi) with fortune-telling abilities instead.

One aspect of The Princess and the Matchmaker I really enjoyed was the meet-cute. It’s the perfect romantic comedy setup full of mistaken identity and a hilarious mix-up. Beyond that, the romance entertains throughout and is the highlight of the film. Whenever the film focuses on the light-hearted rom-com aspect, it really works.

In all, the story idea’s fun, the costumes are gorgeous, the settings beautiful, and the actors all perfectly cast. So, it should have been a complete success. And while there are some definite successful aspects of this historical rom-com, the script could have used a rewrite or two. The dialogue can be a bit confusing at times with overly convoluted explanations of astrology – which may lose some viewers. I personally had to rewind a few scenes to completely understand what was said.

The film also takes an unexpected turn from the cute fairy tale rom-com it was advertised to be. Unfortunately, the film’s much more violent than one would expect and is a rather dour presentation of men in general. Minus the dashing leading man, of course! Three of the four final candidates are so awful, they actually lose some of the humor that should exist in a “Princess and the Pea” type of plot.

For a romantic comedy, scenes of brutality from these horrid candidates felt unnecessary. Especially when a few of the violent scenes were played for laughs. At times, the film became quite serious – but the overall story should have been a cute romantic fairy tale from start to finish instead of a convoluted melodrama with abusive men.

That all said, “most” of The Princess and the Matchmaker is fun to watch. Especially if you enjoy a good, old-fashioned swashbuckling melodrama full of damsels in distress, an incognito princess, and a cute romance with a happily ever after.

The movie’s now available to rent on Digital. (Amazon)

Content Note: NR but would likely be PG-13 for scenes of violence and sexual innuendo.

Have you seen The Princess and the Matchmaker? Do you agree or disagree with my review? Let me know in the comments!

Our romance-themed entertainment site is on a mission to help you find the best period dramas, romance movies, TV shows, and books. Other topics include Jane Austen, Classic Hollywood, TV Couples, Fairy Tales, Romantic Living, Romanticism, and more. We’re damsels not in distress fighting for the all-new optimistic Romantic Revolution. Join us and subscribe. For more information, see our About, Old-Fashioned Romance 101, Modern Romanticism 101, and Romantic Living 101.
Pin this article to read later! And make sure to follow us on Pinterest.
By Amber Topping on July 18th, 2018