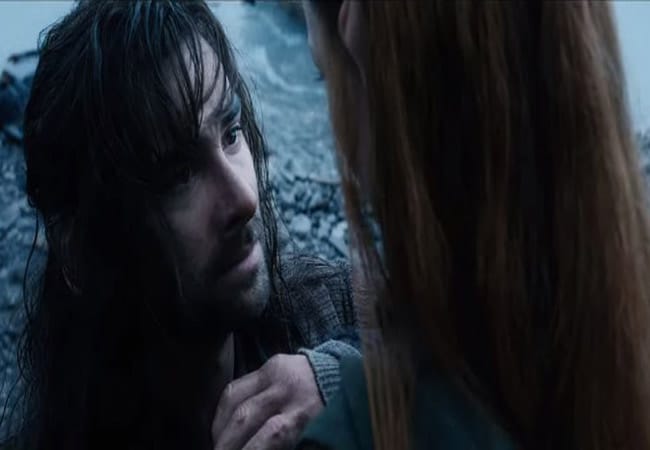 THE MOVIE: The Hobbit: The Battle of the Five Armies

THE MOMENT: Tauriel and Kili are willing to die for each other in battle.

Major Spoilers – Read at your own peril

While many naysayers despised the “Tauriel and Kili” star-crossed romance, I found much to adore in this poetic tale of forbidden love. Sure, the romance didn’t exist in the original book. Heck, not even Tauriel existed in Tolkien’s The Hobbit. With three films to delve into the canon of Jackson’s own interpretation of Middle Earth, however, I appreciated the addition of not only a love story but a female character with heart. I was immediately swept into this love story between the beautiful elf Tauriel and the handsome young dwarf Kili, but how would their epic romance end?

Coming into the final installment of The Hobbit trilogy, I knew Kili would meet his untimely demise. I dreaded this inevitability because Aidan Turner’s interpretation of Kili was just so darn adorable, charming, and likeable. I mean, there really was no way Tauriel could resist….But how would Kili actually die? And would Tauriel live?

When last seen in The Desolation of Smaug, we left our star-crossed pair with the dream or idea of the two of them, but that’s all it was then: an impossible and beautiful dream. In The Battle of the Five Armies, their love for one another becomes more defined and less of a fantasy. After they survive Smaug’s attack, the dwarves left behind decide to take a boat to the dragon’s mountain and find their other kin. Before leaving with the rest, Kili can’t help but speak his heart. He tells Tauriel goodbye, but not before pleading with her to come with him.

Tauriel turns around saying she can’t go with him, but he stops her speaking in a dwarfish tongue. “I don’t know what that means,” Tauriel claims but Kili knows she does. The meaning is clear: he loves her despite their differences, never mind the impossibilities of his or her love. 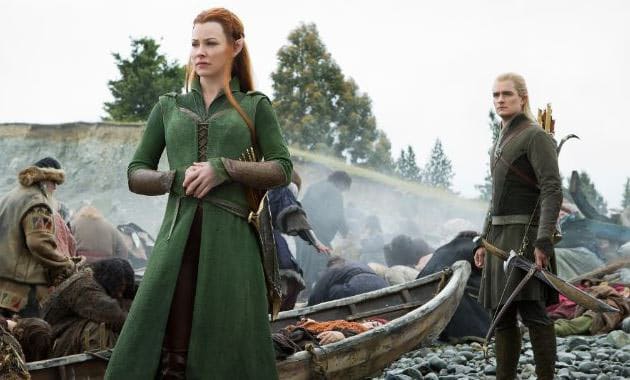 And just when she is about to return the sentiment, Legolas arrives on the scene to get in the way (poor Legolas in this film). Kili departs, but not before he returns to give her the special talisman his mother gave him (the one the two flirted over in the prior film), taking her hand to place it there.

Tauriel stares at Kili as he gets in the boat and drifts away from her life. But this wasn’t the ending for this doomed pair just yet. When Tauriel soon learns of her banishment (for choosing to go after a dwarf), it doesn’t affect her like most elves would. She doesn’t seem upset, rather almost hopeful. Perhaps they can be together after all? This hope doesn’t last long even when they arrive eventually in the same place, a place arrived at by two very different journeys.

With unrequited love of his own for Tauriel, Legolas leaves with her when he learns of her banishment (as ruled by his own arrogant father Thranduil). Together, they witness the departure of an entire army led by Bolg. They must hurry back and warn all.

Meanwhile, Kili, Fili, and Thorin attempt to kill Azog without the knowledge of this same incoming army. They had fallen into a trap. The first to die is Fili, Kili’s beloved brother. With Rage, Kili seeks revenge but what can only a couple dwarves really do?

RELATED Why Legolas Belongs in the Hobbit

When Legolas and Tauriel arrive back in the battles, Thranduil is departing to prevent further bloodshed of his people. Tauriel attempts to stop him with a bow for she knows the dwarves (mainly Kili) would need their help. Thranduil doesn’t take her love for Kili seriously, saying that her love for the dwarf is not real.

Thranduil: Are you willing to die for it?

Legolas arrives to stop his father from harming the woman he loves (Legolas knowing at this point she loves another). While Thranduil attempts to say Tauriel doesn’t love Kili, at this point it’s clear she would do anything for him, even die. Learning he is in danger, she and Legolas go in search of the dwarves to aid them against Azog. It is in this battle for their lives, that we reach the romantic moment and star-crossed ending of Tauriel and Kili.

Tauriel and Kili: The Romantic Moment

Legolas and Tauriel arrive too late for army has arrived and Fili already dead. She sees Kili from afar and jumps into battle to save him. Kili fights her way through the orcs like Lancelot in King Arthur (a romantic battle scene for those who remember it in the midst of the mediocre movie) did to save Guinevere.  She calls out his name. He calls her name back, but he is still fighting. While looking up, she gets attacked by Bolg. They fight and he throws her against a wall.

Just when she is about to lose, Kili arrives to save her this time, but neither one is strong enough to fight him, Kili dying to save Tauriel. It seems both were willing to die for their love. Tauriel screams at the sight of Kili getting stabbed by the Orc, but all they can do is stare at each other one last time.

A tear falls out of Kili’s eye and he dies.

Tauriel reaches out for him, but it’s over. It would have been over for Tauriel as well, but Legolas would also do anything for love, even when not returned and saves Tauriel from death. In the end, Tauriel cries over Kili’s body and gives him back the talisman. Thranduil arrives to see Tauriel with her dead love.

Tauriel: If this is love, I do not want it. Take it from me. Please.”

Tauriel wonders why it hurts so much, and Thranduil tells her: “Because it was real.” Knowing that it was real, Tauriel closes their love story with a kiss.

What happens next for Tauriel is a mystery. Kili is dead; Tauriel is banished from her people, Legolas left to go find Strider, etc. I like to imagine she becomes a tale told in starlight, a tale she tells as a storyteller that drifts from place to place until the time she becomes reunited with the one she loved.

What did you think of Tauriel and Kili’s end? Sound off in the comments…

Come back each Saturday to read the Romantic Moment of the Week.

Our romance-themed entertainment site is on a mission to help you find the best period dramas, romance movies, TV shows, and books. Other topics include Jane Austen, Classic Hollywood, TV Couples, Fairy Tales, Romantic Living, Romanticism, and more. We’re damsels not in distress fighting for the all-new optimistic Romantic Revolution. Join us and subscribe. For more information, see our About, Old-Fashioned Romance 101, Modern Romanticism 101, and Romantic Living 101.
Pin this article to read later! And make sure to follow us on Pinterest.
By Autumn Topping on January 3rd, 2015