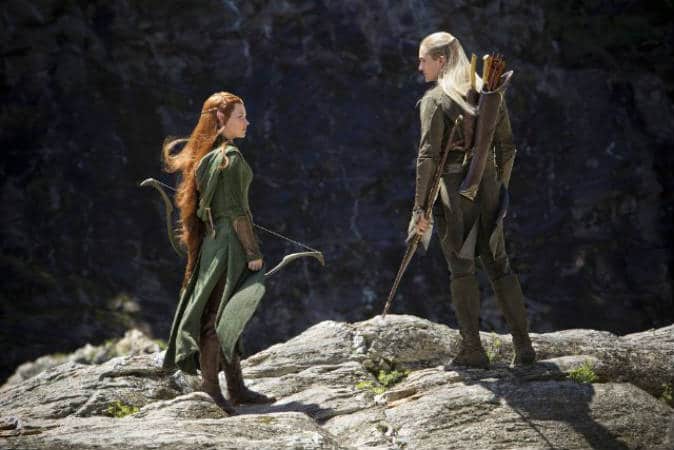 We’ve all heard the arguments: What does Peter Jackson think he’s doing with The Hobbit? Half of it isn’t even in the book. Radagast shouldn’t be there. Legolas shouldn’t be there. And Tauriel is just made up, for crying out loud! Well, this is my argument as to why Legolas (and Tauriel, for that matter) belongs in the movies of The Hobbit.

When the Lord of the Rings films came out (and hasn’t time flown since then?) I spent a lot of time on fan forums. We discussed many LOTR-related topics, but mainly my favourite character in the whole of Tolkien. Legolas. The same old chestnuts came up time and time again. How old is Legolas? Should his hair really be blonde or dark? Who was his mother and what happened to her? Did he really get along badly with Thranduil, as most people seemed to think? Had he ever been in love? At the time, I explored many of these questions in fan fiction (still available to read!) One essay I read at the time, which made a big impression on me and affected my fanfics, was Ellen Brundige’s “Legolas of Mirkwood: Prince Among Equals.”

In it, she talks a lot about how Legolas, although he is Sindar (High-Elven), identifies as a Wood-Elf, to the point of acting more like a subject of Thranduil than his son. Here is part of her explanation.

“As explained above, Legolas’ family is Sindar, survivors from the forest kingdom of Doriath that was destroyed in a bloody feud with the High-Elves near the end of the First Age. Legolas’ grandfather moved east and established a kingdom among the Wood-elves, initially settling in southern Mirkwood. He was on friendly terms with his close neighbor Amdir, the first King of Lórien, who followed the a similar path.

Tolkien says this about Oropher the grandfather of Legolas:

Compared with the Elves of Doriath, his Silvan folk were rude and rustic. Oropher had come among them with only a handful of Sindar, and they were soon merged with the Silvan Elves, adopting their language and taking names of Silvan form and style. This they did deliberately; for they (and other similar adventurers forgotten in the legends or only briefly named) came from Doriath after its ruin and had no desire to leave Middle-earth, nor to be merged with the other Sindar of Beleriand, dominated by the Noldorin [High-elven] Exiles for whom the folk of Doriath had no great love. They wished indeed to become Silvan folk and to return, as they said, to the simple life natural to the Elves before the invitation of the Valar had disturbed it. (The History of Galadriel and Celeborn, UT)

…Apparently Legolas was not raised with any particular family prejudice against Galadriel and Celeborn; he simply does not know much about them, probably because his family had isolated itself so much. He considers himself a Wood-Elf, not Sindar, because that’s how he was raised.”

For me, that is absolutely the Legolas of Lord of the Rings: unassuming, unworldly, deeply connected to nature and happy to play second fiddle to Aragorn.

Fine, you say. But what about the movies?

First of all, let me say that I never expected the Hobbit films to come out. Even if they did, I wasn’t sure if I wanted to see them; I couldn’t bear that anything might destroy the wonderful experience that had been Lord of the Rings. But if they did, I hoped I might see Legolas in them. Maybe standing behind his father’s throne. Maybe going past in the woods. Because I knew for a fact that the only reason Legolas wasn’t in the original Hobbit book was that Tolkien hadn’t invented him by then. His first mention is in The Fellowship of the Ring:

Yes, Legolas was part of the “second generation” Tolkien invented for The Lord of the Rings, along with Frodo and Gimli. But I also knew that Tolkien spent much of his later years trying to make his various writings synchronise factually. The good Professor would know that -along with Galadriel confronting the Necromancer, Radagast’s help, and a lot of other stuff Peter Jackson got from the appendices, The Silmarillion etc. – Legolas had to be there too.

And if Legolas has to be there, then that opens the door to all those fan forum questions I mentioned earlier. Legolas’ mother. His relationship with Thranduil. Were we going to get Peter Jackson’s take on that? Answer: yes, we were. And if you haven’t see the third film yet (where have you been?) it becomes very moving in the end. And for me, perfectly captures the father/son dynamic I always believed Legolas and Thranduil to have.

As a Legolas fan, may I also say that I think Peter Jackson owed us the Legolas of the Hobbit, after creaming off some of his best bits in LOTR to boost Aragorn’s image (horse-whispering, singing in Elvish etc. Not that Aragorn can’t do these things, but Legolas is the Elf of the Fellowship.) In the Hobbit movies, we got the time to see a more princely, Sindarin-speaking Legolas, at home in his own surroundings and able to display his many skills. I think Orlando Bloom’s added maturity by this stage gave us a more subtle performance, more Elvish and with more depth. Sure, he couldn’t be as pretty (serious eye-liner situation going on!) but in all other respects I thought he was more Legolas than before.

So let’s get back to Ellen Brundige and the question of Tauriel. Does she belong? On reflection, I have to say: yes. And that doesn’t mean I wasn’t wary at first. I’m aware that she doesn’t exist in the Tolkien cannon, and was probably put into the films to ensure there was another female character and a bit of love interest. And that could have been scary. For me, Legolas is the number one asexual icon. I truly believe his only love affair is with nature. A bit of Elven snogging on screen was the last thing I wanted to see. But we were in safe hands. Not only does the relationship between Tauriel and Kili foreshadow Gimli’s adoration of Galadriel (which they never had time to get into very much in the LOTR films) but her presence in the story says a lot about Legolas too. Taur, according to the Silmarillion appendix, means: wood, forest. She is the perfect type of a Wood-Elf. And Legolas’ friendship with her, and love (of whatever kind you take it to be) perfectly encapsulates his desire to be identified with the Wood-Elves, not the High-Elves. He is never going to be his father, sitting on a throne, sipping wine and lusting for jewels. He is going to sacrifice himself as a member of the Fellowship, the one “whose eyes were keen (and so) was the rearguard” (Ring Goes South, FOTR), happy to be known simply as, “Legolas from the Woodland Realm,” (Riders of Rohan, TT), to kneel to Aragorn as king and to go into the West with a Dwarf. In The Hobbit movies, we see him at the beginning of this journey. He has no love for Dwarves yet. He has not even met Aragorn. But he loves, and wants to be, a Wood-Elf, a hunter, a companion.

And that is why, for me, Legolas belongs firmly in the on-screen Hobbit. He belongs in Mirkwood. Among his Silvan people. For:

“The heart of Legolas was running under the stars of a summer night in some northern glade amid the beech-woods.” (The Great River, FOTR)

Our romance-themed entertainment site is on a mission to help you find the best period dramas, romance movies, TV shows, and books. Other topics include Jane Austen, Classic Hollywood, TV Couples, Fairy Tales, Romantic Living, Romanticism, and more. We’re damsels not in distress fighting for the all-new optimistic Romantic Revolution. Join us and subscribe. For more information, see our About, Old-Fashioned Romance 101, Modern Romanticism 101, and Romantic Living 101.
Pin this article to read later! And make sure to follow us on Pinterest.
By Elizabeth Hopkinson on January 9th, 2015

2 thoughts on “Why Legolas Belongs in The Hobbit”