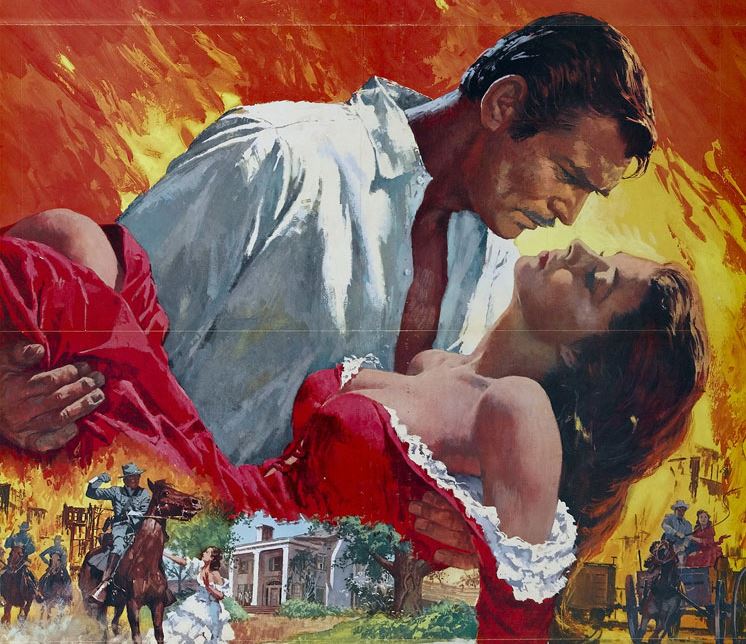 Lest we forget…what would any Great War movie be without an epic, passionate romance? Whether the film is set during the Civil War, WW1, WW2 or the war currently being fought, there is one element that gives the characters and the movie watchers something to believe in: love. The love that brings the leads together, have them think about a bright future together after the battles and horror of war and finally reveal whether the lovers will either get their happily ever after or be torn apart by the tragedy that is war. Here are just a few wartime romances in film to remember:

Gone With the Wind

One of the greatest movies ever made, this classic Civil War film depicts the struggles and heartache of the fiery and determined southern belle Scarlett O’Hara. The premise of the film begins with Scarlett yearning for the reserved gentleman Ashley Wilkes, who is otherwise engaged to his gentle and selfless cousin, Melanie. Meanwhile, Scarlett is observed by the dashing Rhett Butler who believes to have found his match with the feisty Scarlett, and so begins two of films’ greatest love triangles.

When the war begins, Scarlett marries Mellie’s brother out of revenge for Ashley rejecting her, but is soon widowed and resumes her mooning over Ashley all while Rhett attempts to win her affections. He is unsuccessful until Scarlett and new mother Mellie must depart a burning Atlanta, and Rhett is asked to help with their return to Scarlett’s beloved Tara. In one of the film’s most passionate scenes, Rhett abandons Scarlett and her party after getting them out of Atlanta to join the army, confesses his love to a livid Scarlett and with of the most on-screen passionate kisses ever, leaves to fight what is left of the war. While the rest of the film deals with the aftermath of the Civil War and the hardships the Southerners went through, the love triangles remain intact with both of Scarlett’s loves returning from the war unscarred. While Ashley always remains faithful to Mellie, Scarlett remains faithful to him and enters into two more marriages, her last with Rhett. There is much heartache and sorrow for the couple, with Scarlett still pining for Ashley and never realizing that her real love was right in front of her all along. The ending of the movie gives us hope that a reunion is possible between the lovers. “After all, tomorrow is another day!”

Five years have passed since the imaginative redhead Anne discovered her real feelings for Gilbert Blythe, and the couple have spent all this time engaged though separated due to Gil’s furthering his medical education. When Anne returns to the island, her kindred friend Diana, now very wealthy and unhappy in her own marriage, offers to plan the couple’s long awaited nuptials in spite of the looming threat of war in Europe, namely WW1. After Gil convinces Anne to return with him to New York for awhile, she crosses words with enigmatic writer Jack Garrison, who ends up stealing her manuscript, after promising to have her work published, and in return she steals his heart. Disenchanted with the city, the couple returns home to make a life for themselves at Green Gables and resume planning their wedding.

The bliss is cut short, however, when Diana’s husband Fred enlists and Gil soon join’s as a medical officer. The couple marry but are shortly separated and months pass without a word from either Fred or Gilbert. When her husband’s letters are returned, Anne leaves for Europe as a Red Cross volunteer. She eventually crosses paths with Jack Garrison, now a war correspondent, his lover and their infant son. Jack abandons his family and Anne is forced to take care of the baby when his mother is killed by a bomb. Throughout her search, Anne finds Fred, survives a journey through countless battle fields and is finally reunited with her beloved Gil after the war is over. A rare case of lovers being reunited after a war was refreshing and also served as a grand finale for the series, especially when the Blythes expand their family with a certain little one.

You know that time in your life when you’re just starting to understand you have feelings for a life-long friend, but circumstances come between the two of you. Well this was never as true as it was for young lovers Robbie and Cecilia. Cecilia is the oldest daughter to a wealthy British family and Robbie is the son of the housekeeper, studying to become a doctor. Both have known each other since they were little, but recently they have become aware there is something much bigger between them. Following several awkward encounters filled with sexual tension and being watched by Cecilia’s jealous younger sister, Briony, a budding writer, who has a crush on Robbie herself, the two can no longer hide their growing feelings. During a family meal they confess their love for each other and consummate their relationship, being caught once again by Briony, who mistakes this act of love for assault.

When an incident causes the dinner party to search for young runaway relatives, Briony comes across her cousin Lola being assaulted and automatically blames Robbie, who has located the younger cousins. Due to her testimony, the police arrest Robbie and only Cecilia believes in his innocence. Robbie is released from prison several years later; on condition he joins the army. He and Cecilia are briefly reunited before he is sent to the front. The two plan a getaway for when Robbie gets his next leave, and the lovers are filled with hope for their future. Meanwhile Briony has given up on her writing and become a nurse, but has not spoken to her sister since the incident. She attempts to make amends after discovering her mistake in identifying Robbie and in her own way was able to give her sister and her love the happy ending they deserved, though in the case of this film, fiction was better than the truth.

Lively tunes, beautiful sunsets and “colorful scenes,” sure don’t sound like a war movie, but even soldiers’ need entertaining and they certainly were enchanted some evenings by this classic Rodgers and Hammerstein musical about two couples each struggling with their own inner battles during WW2 on a South Pacific island. The first couple is naive nurse Nellie and the sophisticated, older plantation owner Emile, who have fallen in love but both struggle with the age difference between them, their different views on the war and the fact that Emile has two half-Polynesian children from his first marriage. The second couple is Officer Cable and the daughter of island native “Bloody Mary,” Liat. After being set up by her mother on the magical island “Bali Ha’i,” the two fall instantly in love. Unfortunately, Cable knows his family will be prejudiced against the girl and refuses to marry Liat, and the two are separated. Cable is then assigned a dangerous mission, crossing into enemy territory with Emile as a guide. Believing to have lost their loves, both men figure they have nothing to lose. The mission goes well, but tragedy strikes one of the men while the other returns to the island hopeful to be reunited with his love…

Considered one of the best romance films of all time, this war story focuses on a burn victim and the young nurse tasked with caring for him in a bombed Italian Monastery near the end of WW2. As the nurse, Hana, begins her own romance with Kip, a Sikh bomb diffuser, the burn victim recounts his own love story and how he received his injuries. The patient was Count Laszlo, a cartographer mapping the Sahara Desert on an expedition, who fell in love with Katharine, a married woman who joined the expedition with her husband.  The two enjoy a passionate affair, but both suffer from the consequences, as Katharine’s jealous husband planned revenge on the lovers. The result was tragedy for all three members of the triangle, as Katharine’s husband dies in the very plane crash he tried murdering them with, which resulted in near fatal injuries for Katharine. Forced to leave her behind in a cave, Laszlo crosses the desert to find help, but is arrested and forced to flee in his friend’s plane. He returns too late, and while flying his love’s body they are shot down by German anti-aircraft guns and how he received the burns all over his body. By the end of his story, the patient wishes to end his suffering and Hana grants him his wish, as he has renewed her belief in love and follows after her lover Kip.

A recent film dealing with the current war of the world, this Nicholas Sparks’ tearjerker follows a young Marine on his third tour in Iraq and the good luck charm he finds that sets him on the course of true love. Logan finds a picture of a young woman and miraculously survives explosions and death, thanks to his “guardian angel”. When his tour is over, he returns to the States, suffering with survival’s guilt over surviving while many weren’t so lucky. Determined to track down his angel, he leaves home with his dog and finally tracks her down in Louisiana. The angel, Beth, is wary of Logan, who doesn’t admit the real reason for coming to town. Logan does well in the town, befriending Beth’s mother and her shy son, Ben. He also faces an adversary in Beth’s intimidating ex-husband. Gradually the two fall in love and open their hearts to each other, but as with every Nicholas Sparks story, the happiness doesn’t last long and both must decide if being completely honest about both of their pasts can they move forward and have a fulfilling and happy life together.

Do you have a favorite wartime romance? Sound off in the comments…

If you love period dramas, read our Top 50 of All Time

Our romance-themed entertainment site is on a mission to help you find the best period dramas, romance movies, TV shows, and books. Other topics include Jane Austen, Classic Hollywood, TV Couples, Fairy Tales, Romantic Living, Romanticism, and more. We’re damsels not in distress fighting for the all-new optimistic Romantic Revolution. Join us and subscribe. For more information, see our About, Old-Fashioned Romance 101, Modern Romanticism 101, and Romantic Living 101.
Pin this article to read later! And make sure to follow us on Pinterest.
By Julia McCracken on November 11th, 2014