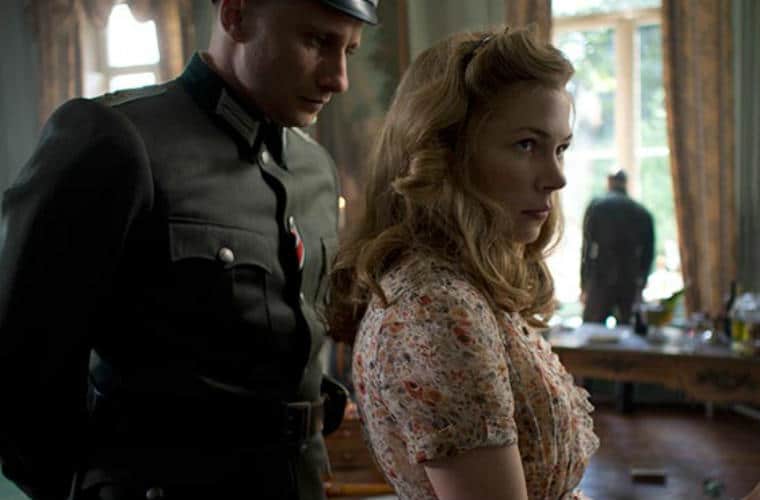 THE PAIRING: Lucille and Bruno

THE MOMENT: Lucille comes to Bruno to ask him for a travel pass.

It is a fact that the extreme conditions of war can encourage the worst in people. A look at the horrific events of World War II proves this without a doubt. So much so that it’s easy to forget that wartime is also a setting for acts of unbelievable bravery, heroism, and love. All of these come to life vividly – sometimes painfully – in the excellent 2015 drama Suite Française starring Michelle Williams and Matthias Schoenarts.

The film depicts the conflict, fear, pain and struggle and confused emotions of the people of a French village which is occupied by the Germans. While some of the invaders are kind and deferring, many of them are brutal and vicious. Like many movies in this time period, the horrors people face is distressing to see. Suite Française explores wickedness on both sides emphasizing how fear and desperation can dictate our actions.

The cast is excellent with Williams as Lucille Angelier and Schoenaerts as the German officer, Commander Bruno von Falk, drawing us into their clandestine (and star-crossed) relationship as it develops in the midst of brutality and fear. One of the best examples happens with the two literally surrounded by the enemy. Their conversation is careful and restrained and heavy with nuance as they strive to explain their feelings without giving too much away.

THE LEAD IN – Suite Française

During the German occupation of their French village, Lucille and her mother-in-law, like many of the other people in the village, are forced to put up a German officer. In this case, Bruno Von Falk. Lucille and many of the other villagers feel repelled by them. Many of the soldiers are violent and uncaring, exploiting their superior position among the population.

Bruno is different – sensitive, gentle and deferring to his unwilling hosts. Lucille tries to remain aloof, but she is drawn by his gentleness, his kindness and the music he plays and writes. However, they are both married. Lucille’s husband is a prisoner of war, a man she married because her father wanted someone to protect her. He is a person she barely knew and did not love. Bruno’s wife, on the other hand, is a distant person, removed from his painful life. As is typical in war, it is like the two are in another world together. They fall in love, of course.

Eventually, the two share some passionate kisses. But Lucille balks at going further when she sees reminders of the horrible acts of the other German soldiers around her. She knows she is consorting with the enemy while their country is under the thumb of the Germans and many of their men are prisoners of war. When she and her stepmother take in and hide a neighbor on the run from the Germans, she feels even more so that she must distance herself from Bruno. Ultimately, they argue and separate.

As the Germans search the countryside for the neighbor concealed in her home, Lucille realizes that the only way they can save him and protect themselves from being found out is to escape from the town and flee to Paris. She knows Bruno is the only one who can help her to get a travel pass, so they can leave without opposition. She goes alone to find him at the large manor house where many of the Germans stay. As she cautiously walks up to the house full of carousing soldiers, she finds most of them drinking on the lawn. Bruno is there too, saddened by the rift between them and by the fact that he’s had to order the execution of an innocent man. They must talk, reconcile and say goodbye in front of everyone without raising their suspicions.

Lucille walks through the crowd of Germans smoking, drinking and talking raucously on the lawn. She is small, vulnerable and very much alone. They throw her leering glances. Some of the young women of the village have had affairs with German soldiers and the looks they give her are clear.

As usual, Bruno is aloof from his fellows as he sits smoking nearby. He notices Lucille and calls out to her asking what she is doing there. She stands before him like a child before a schoolmaster giving him her fabricated story about needing to go to Paris to get medicine for the sick child of one of their tenants.

In his low, slightly roughened voice, Bruno asks if she has heard about the Vicomte, the elderly village mayor who he ordered the execution of. “You must hate me now,” he says. “I would if I were you.” She doesn’t confirm or deny his comment. As he talks, he sips at his wine and continues to smoke as if trying to stay distant. He questions her about the tenant, wondering if he visited the house. When she says no, he explains that his orderly has smelt a different man’s tobacco in the house and thinks she and her mother-in-law are hiding someone.

Lucille realizes that he knows their secret. They have been hiding their fugitive neighbor under the nose of this German officer, knowing that the punishment for their insubordination will be harsh and extreme. She does not say anything. Lucille tries and almost succeeds to not show her horror though we know her heart sinks within her. She asks him breathlessly if he agrees with his orderly.

“If I had even the slightest suspicion, it would be my duty to act on it,” he says coolly. After a strained moment, he explains, “I said it was mine. A gift from my wife.” Lucille is saved! She realizes that this man has once again risked his position and his life for her. Her face softens and Bruno smiles briefly at her for the first time since she arrived. Though his face quickly falls again.

“I shall instruct my orderly to issue you the pass,” he says, and they both know that she is going away and will not return to the village. He no longer smokes and drinks. His efforts to seem unconcerned, fade. Bruno’s face is less stern as he continues to cover the emotions he feels while Lucille’s face softens as she looks at him in deep sympathy, “Thank you,” she murmurs, meaning so much.

She turns to leave, and he gets up hurriedly. Though he is much taller than her, his unassuming posture becomes vulnerable and full of yearning. The tables have turned, Lucille now the stronger one. She turns slowly back to him. He leans close to her so their heads touch. His eyes are lowered. They and the audience seem to have forgotten the German soldiers around them. It’s just the two of them in this moment. They both speak softly so the enemies around them cannot hear their final conversation.

“We will see each other again,” he breathes out. “Not as a soldier. You won’t even recognize me.” She glances up at him, and he finally looks more directly at her.

“Be careful…..with your life,” she whispers brokenly.

He leans against her again. “Is it precious to you?” he says after a long pause.

“Yes,” she says with conviction, her expression warm. He looks at her as she says, “It is precious to me.”

He bows his head again as she turns away from him. She glances back at him briefly and walks away.

Alone Bruno shuts his eyes, clearly trying to contain the storm of emotion and loss within him.

Both Williams and Schoenaerts are powerful actors, and it is particularly evident in this scene steeped with tension and passion – made more intense because the characters cannot be more open. Their difference in heights is really well used, and Schoenaerts especially makes astonishing use of body language to say so much. Even though the characters barely touch, this is one of the most passionate scenes in an impassioned film.

RELATED | Wartime Romances In Film: A Look Back

The overarching sadness of their situation overshadows everything. It’s a strong reminder that war often taints everything it touches. As Bruno seems to be trying to say, if they were in different circumstances how different their situation would be. As this scene ends, we know, despite his hopeful words, that they may never see each other again. I for one was longing to hear what the characters would have said if they were alone and free to express their emotions as they said farewell. Our hearts ache with them at what might have been.

If you’ve seen Suite Française, what do you think of the latent passion of this scene and the acting? What do you think they would have said if they weren’t surrounded by the other soldiers? Comment and let us know. Lovers of romance, if you haven’t seen this movie yet, do so right away!

Content Note: This film has mature content including a couple of sex scenes, brief nudity, some non-graphic violence, and brief strong language.

Photos: The Weinstein Company/Entertainment One

Our romance-themed entertainment site is on a mission to help you find the best period dramas, romance movies, TV shows, and books. Other topics include Jane Austen, Classic Hollywood, TV Couples, Fairy Tales, Romantic Living, Romanticism, and more. We’re damsels not in distress fighting for the all-new optimistic Romantic Revolution. Join us and subscribe. For more information, see our About, Old-Fashioned Romance 101, Modern Romanticism 101, and Romantic Living 101.
Pin this article to read later! And make sure to follow us on Pinterest.
By Dixie-Ann Belle on February 11th, 2017

2 thoughts on “Romantic Moment of the Week – Suite Française: Lucille and Bruno”