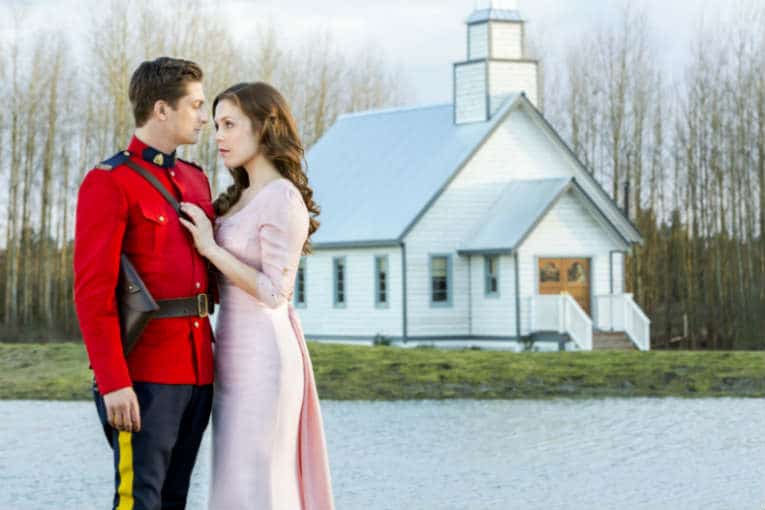 THE SHOW: When Calls the Heart (Hallmark)

THE MOMENT: Elizabeth and Jack get to the heart of the reason why their relationship is encountering such rocky waters, and exchange “I love you’s.”

THE EPISODE: With All My Heart, Season Two Episode Seven

Hallmark Channel’s period drama, When Calls the Heart has earned an ardent following since its premiere back in spring of 2014. (It’s even gained a Twitter following where fans meet using the hashtag, “hearties.”) The show is based off the series of Canadian West novels by Janette Oke and appeals to those who enjoy wholesome family entertainment, but also sweet romance. Season two recently wrapped and aired to more rave reviews. Despite the scripts pairing off multiple couples and even breaking our hearts, the primary romance fans root for is that of its leading couple. 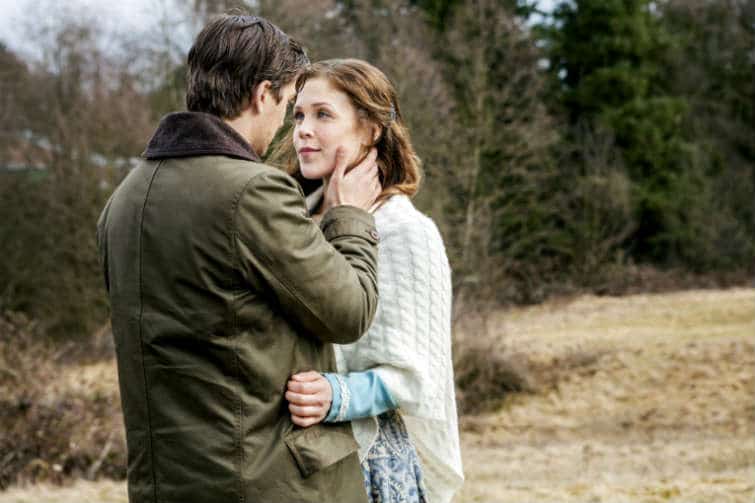 Elizabeth Thatcher left her cultured upbringing to accept a teaching position at the remote outpost, Coal Valley (later renamed Hope Valley). There she meets Mountie Jack Thornton, a man opposite her upbringing in every way. Despite opposition from her family and returns of past loves, their growing affection for one another is evident. It’s this relationship that is the emphasis of the oscillating stories that crop up. A first dance, flirty banter, or their first kiss were all anticipated moments. But it’s a season two finale moment that is featured today.

Following a trip to Hamilton (her hometown), Elizabeth and Jack discover the drastic differences in their lives. Upon their return to Hope Valley, things are strained and despite advice from Elizabeth’s friend and mentor, Abigail, every attempt they make to reconcile goes array. That is until a storm begins to whip up and Elizabeth accidentally loses Jack’s dog, Rip. This leads the pair to stubbornly set out to find the dog when Elizabeth feels pressured to prove her worth to Jack as more than merely a “parlor educated” woman. He follows her forcing them to take shelter from the storm in the old mine.

Miffed at Jack for his lack of belief in her capabilities, once they reach the mine, Elizabeth sets about making a fire by rubbing two sticks together. Jack has matches and upon discovering this, Elizabeth pertly asks, “Well, would you please go and get them?” They set up camp, taking shelter from the storm without much conversation. A fire is started and chit-chat about the storm raging takes place. Taking Abigail’s advice to heart, Elizabeth tries to keep the conversation going when Jack remarks on Elizabeth being headstrong. “You used to like that about me,” she comments back.

“Still do,” is his minimal reply.

She continues, “But you resent who I am and where I’m from.”

“No, I never said that,” he quickly replies.

“Then what did you mean when you said when you said we come from two different worlds?” She continues, trying to find out why they are struggling. “You couldn’t wait to leave Hamilton.” “I didn’t want to become someone I’m not just to please your father.”

“This isn’t about pleasing my father,” Elizabeth replies back.

Jack hasn’t quite made his point about their differing worlds. “Truth is,” he says, “It feels like you’re a different person when you’re in Hamilton.” After a pause, he finishes, “I’m not sure you know who you are yet.”

After an angry outburst from Elizabeth over Jack sounding like her strict father, Elizabeth dejectedly observes, “You just won’t accept me for who I am.”

With disbelief tinging his voice, Jack returns, “You’ve got that backwards.”

This puts an end to their conversation for a while. Elizabeth eventually gets right down to what she believes is hindering them in their relationship. It’s not that they want one another to be someone else or that they come from opposite social backgrounds. She believes she knows why she is pulling away from Jack. It’s his job. She cannot take the fact that someday, his job might take him away from her. She recalls seeing one of Jack’s recent arrests point a gun at him, explaining, “When I saw that man point that gun at you. It was like I couldn’t breathe. It was like my whole world was in slow motion.” Jack follows that with a fierce championing of his work, explaining how careful he is. It’s his job not to fear what may happen. After more rationalization of her fears, she tells Jack she’d never want to change who he is.

“That, right there – you saying that, that means the world to me.”

Jack attempts to further assuage her fears, to no avail, asking her why she’s pushing them apart. He wants to know what she feels for him because he know how he feels about her and then he begins to lean in as the two attempt to hold their tears in check. Then their conversations stalls when the pair believes they hear the dog and Elizabeth is nearly crushed when a wooden post collapses. Jack manages to save her just in time by laying over her and rolling them away from a second collapse. 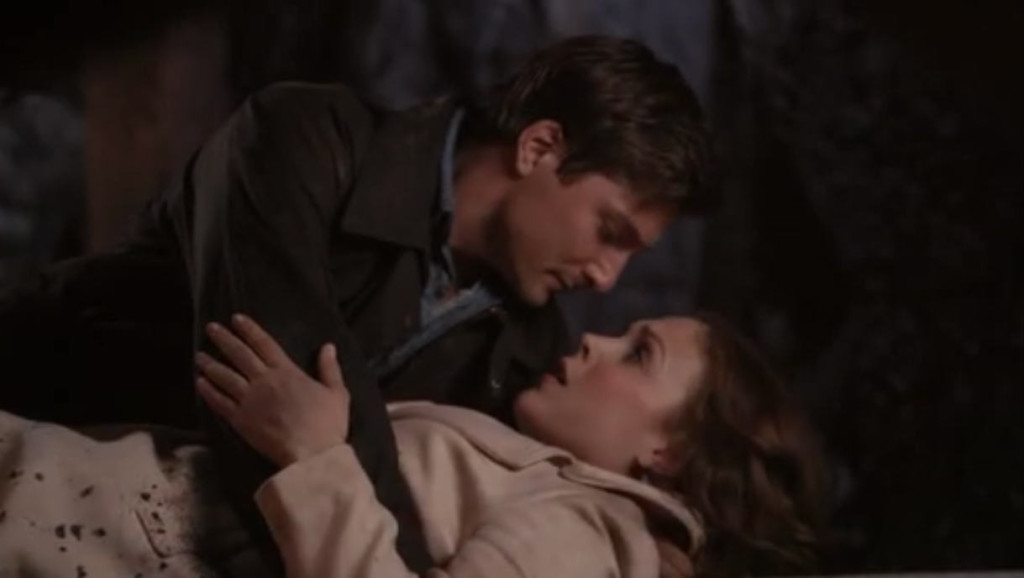 Sweeping her into his arms, Jack carries her back to their fire under her protests she doesn’t need any help. “We’ll argue about that later,” he says. They move back towards their fire where he carefully inspects Elizabeth’s injured knees.

The ice seems to have been broken by this life and death situation, and as the two share a look of keen understanding, the emotions and reasons they fell in love seem to wash away their doubts as evidenced by their faces.

Jack tells her she just proved being a schoolteacher can be just as dangerous as the job of a Mountie. Moving in closer to her, he engages in some cheeky flirting, “You know I hear, the best thing about arguing is making up.”

“I’ve read that too,” she replies with a smile. 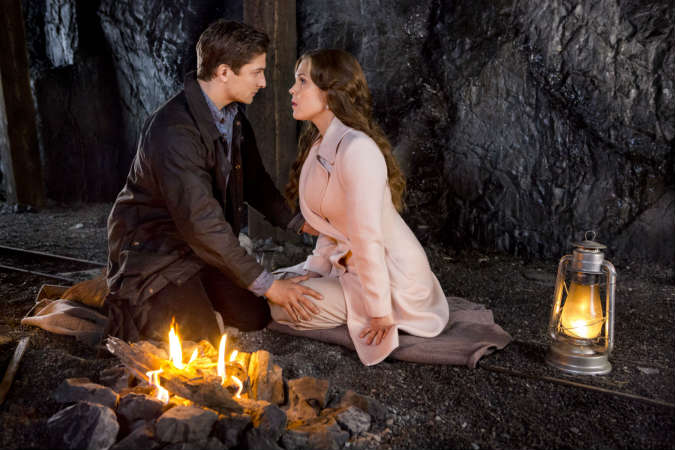 And then he says the words both longed to hear. Leaning in and gently palming her cheek, Jack begins, “I love you, Elizabeth Thatcher.” 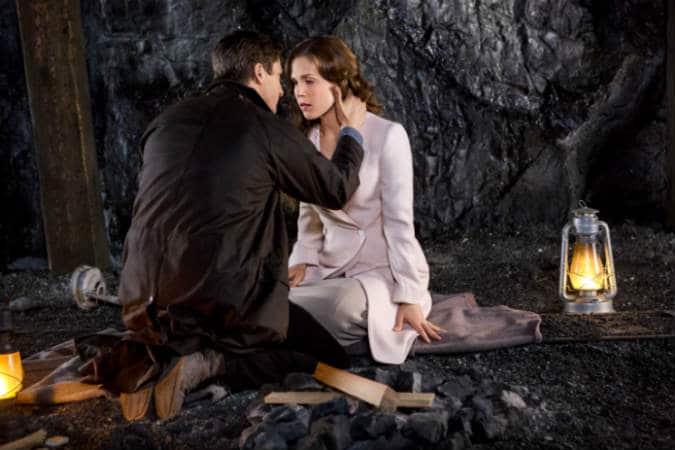 “I love you, too,” she breathes in response. Their proclamations are sealed with a kiss as Jack caresses her face and slowly, leans in to kiss Elizabeth.

The takeaway for Jack and Elizabeth is the gift they have at a second chance. And neither one wishes to waste it. This sequence of events is important to the show and this couple. By forcing them together, they were able to talk through everything that had been bothering them. In the course of one afternoon, they learn compromise and what it means to love another person without hesitation. As the episode winds to a close, bolstered by their newfound reconciliation, Jack plans a proposal for Elizabeth, understanding now that he doesn’t want to let go of Elizabeth. Only before he can do so, a cliffhanger sets up the eventual third season, a surprise that involves a second proposal of marriage.

Do you watch When Calls the Heart? If so, what were your thoughts on the finale? Do you have a favorite moment between Jack and Elizabeth? Comment below…

TV Review: When Calls the Heart

Our romance-themed entertainment site is on a mission to help you find the best period dramas, romance movies, TV shows, and books. Other topics include Jane Austen, Classic Hollywood, TV Couples, Fairy Tales, Romantic Living, Romanticism, and more. We’re damsels not in distress fighting for the all-new optimistic Romantic Revolution. Join us and subscribe. For more information, see our About, Old-Fashioned Romance 101, Modern Romanticism 101, and Romantic Living 101.
Pin this article to read later! And make sure to follow us on Pinterest.
By Rissi JC on June 27th, 2015